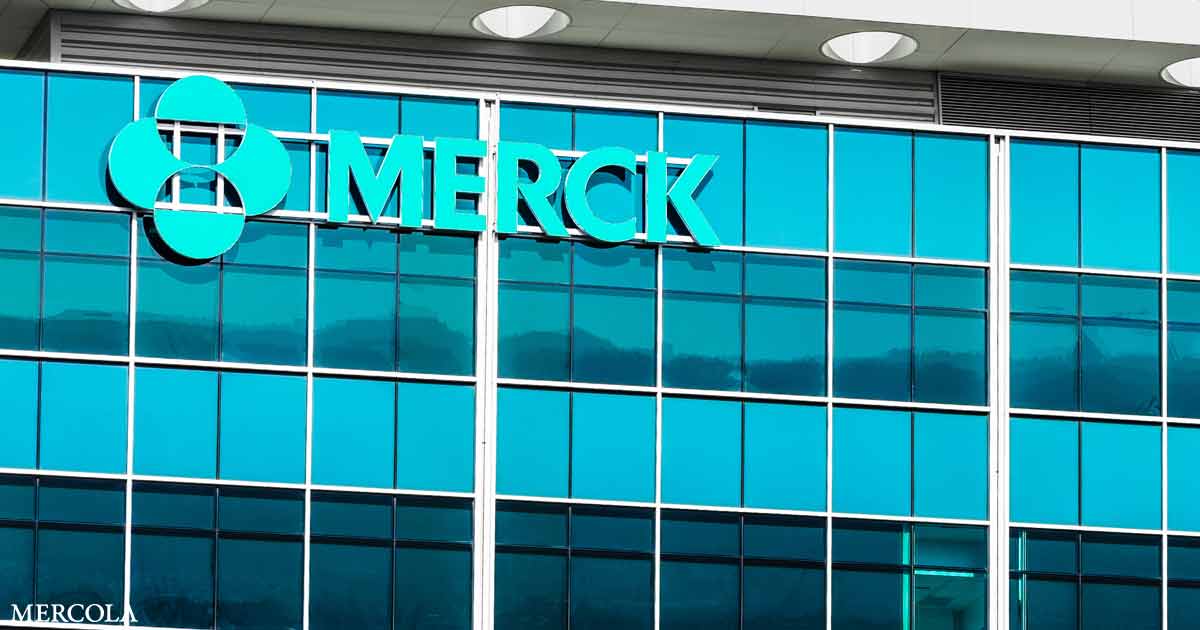 An advisory panel to the U.S. Food and Drug Administration voted to grant emergency authorization to Merck’s oral COVID-19 pill molnupiravir (Lagevrio) — but only by a narrow margin.1 The 13-to-10 vote speaks volumes about the panel’s confidence in the treatment, as do the numerous concerns regarding efficacy and safety voiced by the panel.

Merck reported in a press release in October 2021 that their antiviral drug led to a 50% risk reduction in hospitalization and death among COVID-19 patients. That was based on data from 386 patients, however. When the full analysis was released, which included data from 710 patients, the effectiveness declined significantly.

Among those who received the drug, the rate of all-cause hospitalization or death was 6.8%, compared to 9.7% in the placebo group — a relative risk reduction of just 30%.2 Several panelists reportedly said that the change in data was poorly explained,3 and it represents just one concern voiced by experts that raise major red flags about Merck’s COVID-19 pill.

Placebo Outperformed Drug in Second Half of Trial

In an addendum released November 22, 2021, the FDA stated that they became aware of the “topline safety and efficacy results from all 1,433 randomized participants.”4 The data showed that patients taking the placebo fared better than those taking molnupiravir.

As noted in a commentary in the BMJ, “The full data showed more hospital admissions among patients taking molnupiravir (6.2%) than among those taking a placebo (4.7%) and led Merck to revise the benefit of preventing admission downwards to 30%.”5

Further, the trial was stopped early after interim results showed eight deaths in the placebo group compared to zero in the molnupiravir group. However, post-interim results painted a very different picture — one death was recorded in each group.6 The BMJ reported:7

“When questioned why the trial’s later participants showed such different outcomes than those in the interim analysis, a physician representing Merck told the panelists that the later group contained older patients, were more likely to be female and recruited from Europe, and more likely to carry the delta variant. But, he said, the drop in efficacy at the end of the trial ‘doesn’t really add up to us.’”

Dr. Pierre Kory, who is part of the group that formed the Front Line COVID-19 Critical Care Working Group (FLCCC) to advance early treatments for COVID-19, has pleaded with the U.S. government to review the expansive data on the drug ivermectin to prevent COVID-19, keep those with early symptoms from progressing and help critically ill patients recover — to no avail.8,9

Yet, the FDA went ahead and granted emergency use authorization (EUA) to Merck’s highly questionable drug. Kory tweeted his dismay at the decision:10

“No LOVE for Pharma given unconscionable behaviors now & historically. But I can HOPE. Hope now dashed: 2nd half of Merck’s trial: placebo outperforms drug. Ouch. Even FDA admits drug is weak & risky.. while approving? EUA for IVM [ivermectin] please (I can also DREAM)”

In October, Dr. Anthony Fauci applauded molnupiravir, calling it “extremely important” and praising its results to date. “It’s a pill that’s given by mouth, so you don’t need anything special other than taking a pill the way you take any pill. And the results are really quite impressive,” he told CNN’s “State of the Union.”11

It’s unclear if Fauci has changed his opinion given the less-than-stellar results now available, but the U.S. government is already on the hook for about 3.1 million courses, which it bought for approximately $2.2 billion.12 Officials have been touting the ease of the pill, which is taken at home, orally, every 12 hours for five days.13

Merck plans to produce 10 million courses of the drug by the end of 2021,14 but the FDA panel’s endorsement of the drug is even curiouser given that more effective treatment options — namely monoclonal antibodies — have already been authorized. As noted in the BMJ:15

“The U.S. has already authorized three monoclonal antibody cocktails, which have shown efficacy above 60% in preventing admission, and the FDA does not generally approve drugs that are less efficacious than those already in use.”

It’s not only efficacy concerns that led to red flags for some of the FDA panelists — safety concerns were also expressed. Molnupiravir works by integrating into the virus’ genetic makeup, triggering mutations that ultimately kill the virus. A pill that triggers mutations in a virus could potentially trigger mutations in mammalian cells, however, posing a risk of cancer and birth defects.16

The risks are severe enough that the drug is recommended only for adults, due to the risks it could pose to growing children, including increased growth plate thickness noted in animal studies.17 Pregnant women and those expecting to become pregnant were excluded from the trials, and male subjects could not donate sperm for one month after their last dose. Modern Discontent reported:18

“People should be reminded of the issue with thalidomide in the 1960s, a drug used to treat morning sickness in pregnant women which scientists later found out was a teratogen and caused many birth defects. It’s because of this that molnupiravir should not be used under any circumstance in pregnant women with the concern about possible teratogenicity.”

Ultimately, the FDA panel did not recommend approving the drug for children or those who are breastfeeding, due to risks of embryo-fetal toxicity, bone and cartilage toxicity and mutagenicity.19

Molnupiravir’s mechanism of action — driving genetic mutations — is in itself problematic, given the already quickly mutating coronavirus spike protein. During Merck’s phase II trial, the SARS-CoV-2 spike protein exhibited 72 structural nucleotide changes, while the spike protein in the placebo group had only nine such changes.

The reality is, some of those changes could make the virus more infective, resistant to vaccines and treatments and unleash escape mutants into the environment.20 FDA panel member James Hildreth, president of Meharry Medical College in Tennessee, voted against authorizing molnupiravir for this reason.

He said, “Even if the probability is very low, 1 in 10,000 or 100,000, that this drug would induce an escape mutant which the vaccines we have do not cover, that would be catastrophic for the whole world.”21 William Haseltine, who founded and chaired the Division of Biochemical Pharmacology at Harvard, raised similar concerns in Forbes, stating:22

“My misgivings are founded on two key concerns. The first is the drug’s potential mutagenicity, and the possibility that its use could lead to birth defects or cancerous tumors. The second is a danger that is far greater and potentially far deadlier: the drug’s potential to supercharge SARS-CoV-2 mutations and unleash a more virulent variant upon the world.”

Haseltine explained that during prepandemic studies, molnupiravir was tested against pathogenic coronaviruses such as MERS-CoV. Not only were the coronaviruses able to become resistant to the drug, but the viruses continued to survive and replicate even with large numbers of mutations in every gene and protein.

In the lab, the treated viruses replicated slightly slower than the nontreated viruses; however, in the real world the drug is likely to wreak havoc in unintended ways, particularly since many people may not finish the entire course of the drug.

At suboptimal doses, i.e., if someone doesn’t take the drug for the entire five days or misses a few doses here and there, it may create the prime environment for the transmission of mutated viruses. Haseltine told Forbes:23

“There is a strong likelihood that in the real world, people will not take the full course of pills. A slew of studies on adherence to daily oral antibiotics suggest that many patients — as many as 40% — fail to complete the full course of treatment.

At these suboptimal concentrations, molnupiravir could have the unfortunate effect of introducing mutations across every gene and protein of the virus, including the spike, but not necessarily killing it off.

The drugmakers, Merck and Ridgeback, as well as the FDA are exploring whether molnupiravir is safe for personal use in high-risk individuals with mild to moderate disease and whether its benefits outweigh any potential risks.

But they should also be determining the broader danger, and how to prevent the drug from unleashing new and deadlier variants across the globe. Already SARS-CoV-2 has shown a remarkable ability to mutate and survive under pressure.

The drug’s manufacturers, Merck and Ridgeback, are entering into licensing deals that would allow the drug to be made and sold widely in more than 105 countries, which means that, if approved by regulators, we will soon have very little control over the drug’s administration and dosages delivered. We are potentially headed towards a world class disaster.”

Are There Other Options?

There are early treatments for COVID-19 that could save lives, but they’re not being widely circulated in the media. Dr. Peter McCullough recommends that you demand early treatment if you have COVID-19, whether or not you’ve gotten the shot.24

McCullough’s early treatment regimen initially includes a nutraceutical bundle of zinc, vitamin D, vitamin C and quercetin. While you’re recovering at home, open your windows and get plenty of fresh air and ventilation in your home. If symptoms persist or worsen, he recommends calling your doctor and demanding monoclonal antibody therapy.

The treatment progresses to include anti-infectives like HCQ or ivermectin, antibiotics, steroids and blood thinners. If your doctor refuses to treat COVID-19 in the early stages, find a new one and/or visit a telemedicine clinic that will help, as “the prehospital phase is the time of therapeutic opportunity.” You can also download McCullough’s and colleagues’ “A Guide to Home-Based COVID Treatment.”25

FLCCC’s I-MASK+ protocol can also be downloaded in full,26 giving you step-by-step instructions on how to prevent and treat the early symptoms of COVID-19. FLCCC also has protocols for at-home prevention and early treatment, called I-MASS, which involves ivermectin, vitamin D3, a multivitamin and a digital thermometer to watch your body temperature in the prevention phase and ivermectin, melatonin, aspirin and antiseptic mouthwash for early at-home treatment.

Household or close contacts of COVID-19 patients may take ivermectin (18 milligrams, then repeat the dose in 48 hours) for post-exposure prevention.27 Their protocols are translated into 23 different languages to provide widespread, free access to this lifesaving information, including how to get ivermectin,28 which FLCCC hopes will be formally adopted into national or international COVID-19 treatment guidelines in the near future.

Best podcasts of the week: Jessica Barden is cryogenically frozen in a BBC thriller | Podcasts

Is Canada’s military ready for the challenges ahead? ‘No,’ says defence chief – National