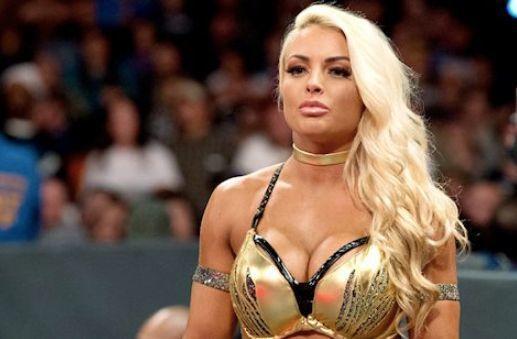 Tonight’s launch of NXT 2.0 featured some tag team action between Kacy Catanzaro and Kayden Carter alongside Sarray versus Mandy Rose, Gigi Dolin, and Jacy Jayne, and the set up to the match involved Rose making a surprises (but not really) appearance as she attacked Carter and Catanzaro. The mystery figure was wearing a black hood but when she revealed her identity it was Rose, and she also revealed her brand new look, as the blonde-haired Rose has gone full brunette.

It’s a big change look-wise for the star, who has played up the movie star blonde bombshell angle for quite some time, but now she is going for something a little different and is apparently the leader of this new faction, though we don’t have a name for the group just yet.

Rose, Dolin, and Jayne would go on to win their match, and you can check out the highlight of Rose’s debut in the post above.

Rose recently made her return to NXT after Aaliyah was sent over to Raw, and since then Rose has gone about recruiting promising talent. After a series of losses on their own, Rose approached Dolin and Jayne to come with her and align together, and now they seem to be a pretty powerful group. This was a promising start for the team, and we’ll be eager to see if they can keep this momentum moving forward.

You can find the official description for tonight’s NXT below.

“Tommaso Ciampa, Pete Dunne, LA Knight and Kyle O’Reilly to battle for NXT Championship, Indi Hartwell and Dexter Lumis head to the altar for InDex wedding and so much more. Don’t miss the arrival of NXT 2.0, tonight at 8/7 C on USA Network!”

Here’s what has happened so far:

What do you think of Rose’s new look? Let us know in the comments and as always you can talk all things NXT with me on Twitter @MattAguilarCB!

Every decision of government needn’t be a big reform: Anand Mahindra

Why you need a personal laptop