What Pat Cipollone likely will and won't answer at Jan. 6 hearing 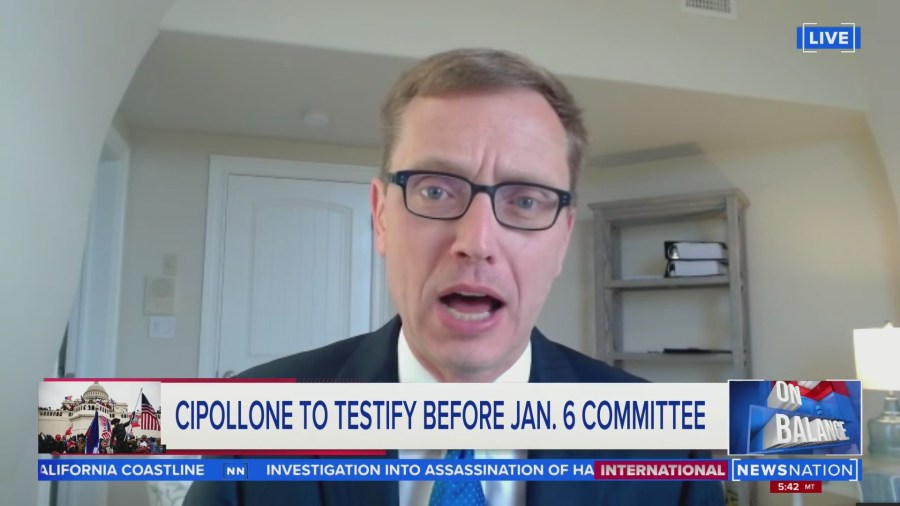 CHICAGO (NewsNation) — The former White House lawyer is set to testify before the Jan. 6 committee, but another prominent attorney says it may not be the bombshell some are looking for.

Pat Cipollone was likely privy to some of Former President Donald Trump’s most intimate conversations as White House counsel, but those could be subject to attorney-client privilege.

Tom Dupree, former deputy assistant attorney general in the George W Bush administriation, believes Cipollone and the House January 6 Committee likely worked out some ground rules ahead of his agreement to testify.

Trump bristled at Cipollone’s subpoena, suggesting trying to interview a White House counsel for “dirt” will “set a terrible precedent.”

What’s on the table, Dupree said on “On Balance with Leland Vittert,” could be, “things he might have observed, particularly, as it sounds like, on January 6 he may not have spent a lot of time in the company of the President but just observed what other people were saying and what other people are doing.”

The things that would be off limits, Dupree said Thursday, “would be the pure legal advice that he was giving to the president.”

“That, to me, at least, would obviously bring up more closely the questions about attorney client privilege, executive privilege, alike,” he continued.

Dupree says Cipollone would need to present evidence that Trump knew he was breaking a law for his testimony to move the needle.

“Right now we’ve got a pretty good detail of comments and proposals that were made to the president, we know somethings of what the president said, but what it seems the committee has really been looking for throughout this hearing process is evidence that the president himself understood and knew that he was violating the law.”