‘We’ll fight’: Canadiens not ready to call it quits ahead of elimination game 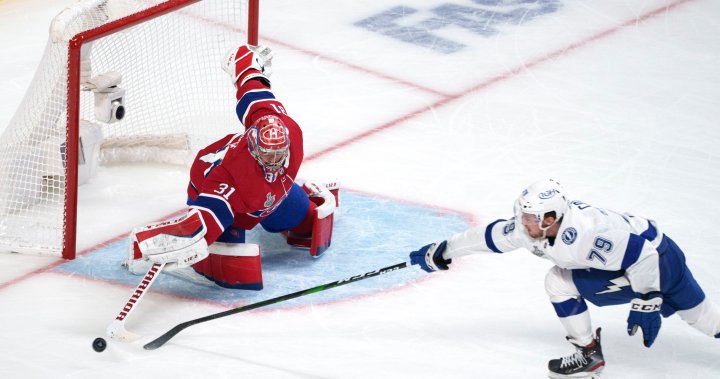 Dominique Ducharme has been here before.

Well, not right here — down 3-0 in the Stanley Cup final and facing elimination on home ice — but the head coach of the Montreal Canadiens stared at the same long odds back in junior and managed to flip the script.

After losing the first three games of their quarterfinal series against the Quebec Remparts in the 2012 QMJHL playoffs, Ducharme’s Halifax Mooseheads responded with 2-1 and 3-2 wins to force Game 6.

Read more:
Call of the Wilde: Road to the Cup narrows for Montreal Canadiens with 6-3 loss to Tampa Bay

Led by 16-year-old Nathan MacKinnon, they followed that up with a 5-2 victory before securing a thrilling 5-4 overtime decision in Game 7.

The stakes are much higher some nine years later in the summer of 2021 with Montreal down 0-3 against the Tampa Bay Lightning, the clinical defending champions looking to become just the second team to repeat since 1999.

Ducharme’s overarching blueprint to get back in this series, however, remains the same.

“You can’t look too far ahead,” he said Saturday. “If you do, the mountain seems pretty high. There are steps to follow. The first step is to win at home (Monday in Game 4). Those who think we’ll just go away don’t really know us. We’ll fight.

“That’s what we’re thinking about.”

2:02
Habs fans trying to put all the odds on their sides

Habs fans trying to put all the odds on their sides

The Canadiens are also thinking about how they can get back to a style of play that solidified midway through the first round against the heavily favoured Toronto Maple Leafs and propelled them on this improbable playoff journey.

Montreal erased a 3-1 hole in that series by taking care of the puck, finally capitalizing on its chances, and relying on consistency up and down its lineup.

The Canadiens then stunned the Winnipeg Jets with a sweep — they won seven straight contests without ever trailing at one point this spring — and used the same formula against the Vegas Golden Knights in the semifinals.

But the NHL’s 18th-ranked team during the pandemic-shortened regular season, and the last to qualify for the playoffs, has looked like it for much of the Cup final.

Montreal gifted Tampa goals left and right in Friday’s 6-3 loss at the Bell Centre with sloppy decisions and mental mistakes that simply weren’t made over the last month-plus of grinding, methodical action.

The Lightning capitalized on an inability to clear the puck and a needless delay-of-game penalty early to take a 2-0 advantage in Game 3.

Montreal steadied itself and cut the lead heading into the first intermission, but again switched off in the opening stages of the second by failing to get the puck deep on a line change and creating a 2-on-0 the other way that was followed up by a 2-on-1 strike a few minutes later.

And that was basically that at 4-1.

The Canadiens are wary of making mistakes against an opponent stacked with skill and assassin-like precision, but is overthinking and not playing on their toes actually forcing them into the exact errors they’re looking to avoid?

“We know how to manage (the puck),” he said less than 24 hours after returning to the bench following a 14-day absence because of a positive COVID-19 test. “There’s nothing to say about our will (in Game 3). You just need to find the right balance and manage that, and manage that energy the right way.

4:56
P.K. Subban weighs in on the Stanley Cup final

P.K. Subban weighs in on the Stanley Cup final

What was working in the first three rounds is no longer the case. And Tampa, with the likes of Nikita Kucherov, Brayden Point, Victor Hedman and Andrei Vasilevskiy, is doing its part to complicate matters.

“The best team we’ve played,” Ducharme said with both clubs staying off the ice thanks to an extra day off between games. “Everything that we do is just a little bit more difficult because we’re playing a good team. I don’t feel that being smart with the puck puts you on your heels because you don’t want to make mistakes.

Lightning defenceman Ryan McDonagh said Tampa has emphasized speed to keep Montreal off balance at both ends of the rink.

Read more:
Fans say seeing Habs at home in final a once in a lifetime experience

“That’s when we’re really at our best: when we’re attacking the opposition when they don’t have the puck,” said McDonagh, whose team can become the first since the 1998 Detroit Red Wings to sweep the final. “When we get away from it, we realize it right away.

“When we’re at our best, when the puck’s not on our stick, we’re using our speed to get in their face and try and disrupt things.”

Ducharme said he’s contemplating lineup changes with his team’s back pressed against the wall, but one switch firmly off the table is benching Carey Price.

The former Hart and Vezina Trophy winner is the main reason Montreal is in its first final since 1993, but he also owns an ugly .835 save percentage in the series.

“Carey’s the guy playing Monday,” Ducharme said. “You can talk about one guy or another guy. It’s about all of us. We need to be better in front of him. Everyone. All 20 guys putting on the jersey are looking for, Monday night, playing their best game.

The trouble is, their best game still might not be good enough.

Denial of responsibility! NewsConcerns is an automatic aggregator of the all world’s media. In each content, the hyperlink to the primary source is specified. All trademarks belong to their rightful owners, all materials to their authors. If you are the owner of the content and do not want us to publish your materials, please contact us by email – admin@newsconcerns.com. The content will be deleted within 24 hours.
CanadaCanadienscanadiens game 4Dominique DucharmeHABSHockeymontrealmontreal canadiens
0
Share