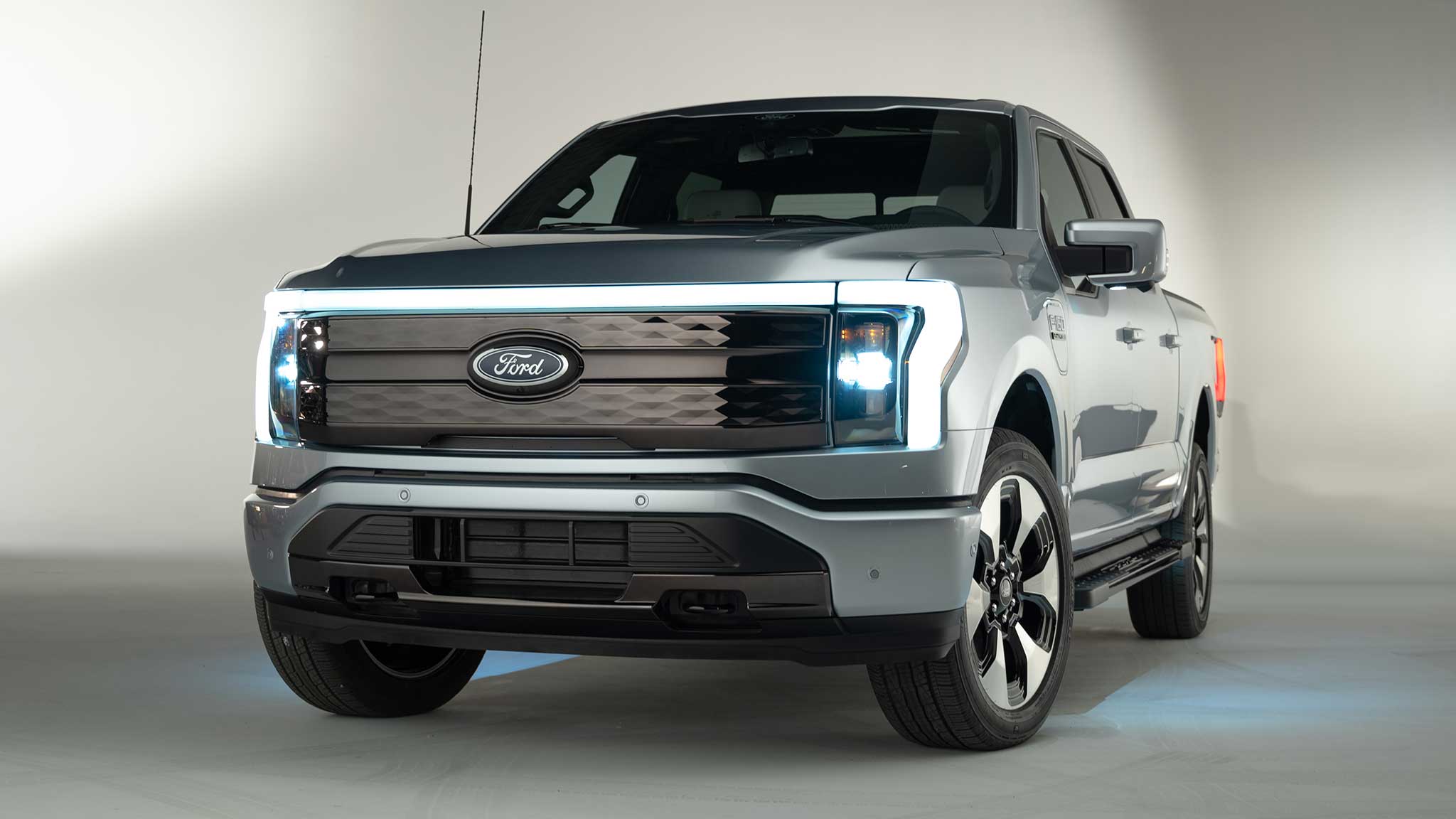 But now that it is time to toot its horn, Ford honks loudly. We have not only seen the 2022 Ford F-150 Lightning, but Automobile was among the first to get a ride in some prototypes; only President Joe Biden has us beat, after having somehow negotiated a spin behind the wheel.

Some of the trucks had material covering portions of the interior because surfaces are not final. Engineering-wise, these early-build trucks are still being fine-tuned, with systems in the calibration phase. But Ford assured us the drive experience is close to what customers can expect when the 2022 Ford F-150 Lighting goes on sale in May 2022.

One of the first thing Lightning drivers will notice is … silence. Even the test engineers said the absence of engine rumble is hard to get used to and it is easy to forget whether the truck is on or off. Regulations demand some form of sound to alert pedestrians. Everyone is inventing their own noise right now; some are futuristic whines like the Jetsons, others are deliberately aggressive. For the Lightning, Ford went for a white noise that is noticeable without being annoying.

We took our ride at Ford’s Michigan Proving Grounds in Romeo, where conventional F-trucks undergo testing before they are signed off on. The Lightning underwent the same brutal rigors and had to meet the same requirements as the rest—no exceptions. By the time the Lightning goes on sale next year, it will have accrued millions of test miles.

Our first leg was on Ford’s highspeed oval. From the passenger seat, the ride was quiet and smooth. When chief engineer Linda Zhang floored it from rest, the acceleration threw us back courtesy of the 563 horsepower and 775 lb-ft of torque from dual motors fed by the bigger extended-range battery.

Ford had said the Lightning can accelerate from 0-60 mph in the mid-four-second range, but President Biden teased out a more accurate figure while visiting Dearborn on Tuesday for a plant visit. “This sucker’s quick,” Biden told reporters. We agree. Equally impressive is the instantly available torque at highway speeds for passing, as well as the quick steering response to make that pass.

Being electric, the Lighting offers one-pedal driving—lifting off the accelerator slows the truck using the motors’ resistance—and the driver can choose whether this function is on or off. It recaptures energy while decelerating faster to avoid stomping on the brake. There was no jerkiness detected as the setup slowed the roughly 6,500-pound truck. Even though it is about 1,000 pounds heavier than a comparable crew-cab F-150 with the 5.5-foot bed and 3.5-liter engine, the truck doesn’t feel like it carries the extra weight.

The new Lightning is the first F-150 to utilize an independent rear suspension for more controlled handling while making room down the vehicle centerline for the batteries and rear drive motor. Situating the batteries between the ladder frame’s rails extending from the front motor to the rear motor lowers the center of gravity, which further contributes to the Lightning’s tidy handling and instantaneous steering response.

Switching to Sport mode provides more aggressive pedal mapping and sportier, more responsive steering, Zhang told us. We wish we were behind the wheel to verify. The Lightning has three other drive modes: Normal, Tow-Haul, and Off-Road.

Towing With All That Torque

The truck we rode in was towing 6,000 pounds but it was hard to tell a trailer was attached. We could feel a slight tug, but it was explained as trailer lash, not an issue with the truck’s capability. And with the independent rear suspension, you don’t feel the pitch and bounce you can get when towing with conventional F-150s.

We went up a 25-percent grade, then down a 14-percent grade, and back up a 7-percenter. It is odd to not hear an engine revving, though on the downhills the motors generated electricity to replenish the battery. Tow-Haul mode does not increase the level of regeneration going downhill but it does tune it to keep the speed nice and steady—the EV version of engine braking.

The 2022 Ford F-150 Lightning’s driving range drops when towing, but the truck’s trip-planning apps can map the route ahead of time and track the truck to the nearest charge station. The truck knows when you are towing and adjusts the estimated range accordingly.

Like the rest of the F-150 lineup, the 2022 F-150 Lightning has Pro Trailer Backup Assist. Debuting on the Lightning is Pro Trailer Hitch Assist, which controls steering, throttle, and brake inputs to align the ball hitch under the trailer coupler. You have to hop out to attach the trailer yourself. Eventually regular F-150s will get this feature as well.

Off-Roading With a Massive Battery Pack

Ford fully expects Lighting buyers to take the truck off-road. The batteries are in a waterproof casing and there is a protective exoskeleton as well as underbody metal skid plates to protect them.

Ground clearance is a bit less than a conventional F-150’s because of the low skateboard and its battery placement but is still a decent eight to nine inches, depending on the tire package. The truck we rode in had mostly FX4 trim bits, said Anthony Magagnoli, a Ford off-road and trailer-tow experience development engineer. All-terrain tires are standard; the Lightning has the same electronically locking rear differential as the combustion-engine model, and AWD courtesy of the dual motors.

While the regular FX4 has three off-road drive modes, they are packaged into a single off-road mode for the Lightning. With so much instantaneous torque available, softening the pedal map in Off-Road provides more control to allow a little bit of slip without outright spinning the tires. One pedal driving is not used off-road, as it’s a surefire way to get stuck if you back off the throttle, lose momentum, and stop.

Traction and stability control are tuned for off-road. Cameras provide a 360-degree view, but there are none on the underside for off-roading to see the terrain below you when wheels are in the air.

But Can the Lightning Jump?

On our ride, the 2022 Ford F-150 Lightning performed like a giant rally car on a hardpacked bumpy surface. It felt more solid than the Ford Raptor, which was made for this type of terrain but was engineered to handle big movements and which can feel skittery in the relatively small stuff. “Tradeoffs,” Magagnoli said. The Raptor, though, is good for jumping. “You’re probably not going to jump this one, right?” he said. That garnered a good laugh, but it also made us curious.

The Lightning is robust enough to take some hits. During an off-road test we introduced the underbody to the ground, and it wasn’t just a glancing blow. We hit some moguls where the vehicle’s weight sat on the protective underbody. We cringed, Magagnoli laughed. The truck did what it was designed to do; with plates running from front to back, the pickup can almost surf over obstacles like the mogul we crested. Deep ruts, mud, and water also did not phase the Lightning.

Being electric does not give the Lightning a hall pass in any of Ford’s testing requirements. When it comes to off-roading, being a EV can be an asset. The chassis does not have a massive engine hanging over the front axle and trying to roll over the tires. The center of gravity is lower. The independent rear suspension allows the tires to articulate on their own, delivering a smoother ride that doesn’t toss occupants around as much. And the instantaneous torque adds a significant fun factor off-road.

So Far, So Good

Our brief time in the passenger seat suggested the 2022 Ford F-150 Lightning does not come with dynamic compromises that will upset loyal truck buyers. It is quicker, more responsive, and can tow and off-road as well as or better than comparable F-150s with combustion engines. And it has some perks from being electric that enhance the experience.

Then there is the more incorporeal: When you roll down the windows and hear birds chirping, leaves rustling, and no engine running, “I kind of feel like this is the right way to do this,” Magagnoli said. “It feels more at one with nature.”