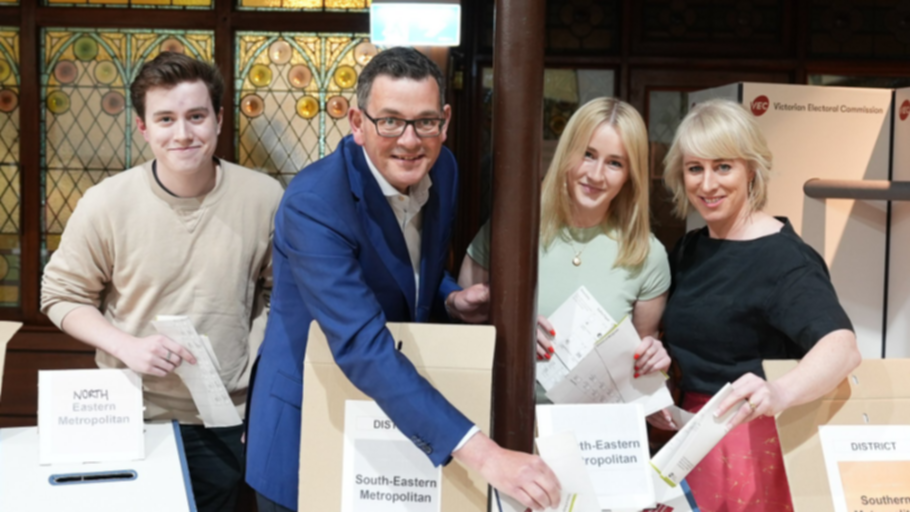 Victorian Premier Daniel Andrews has broken tradition – drawing criticism by casting his ballot for Saturday’s election early and outside of his electorate.

On Thursday night, Andrews posted a photo of himself voting alongside wife Catherine and two of his children, Noah and Grace, at a pre-polling booth in the CBD.

The move broke tradition as there was no media in attendance to see the premier cast his vote.

He also voted outside of his Mulgrave electorate, a seat he has held since 2002 and is being contested in Saturday’s election by independent Ian Cook.

After the photo of his family voting was shared, Andrews copped some criticism – including from former Liberal premier Jeff Kennett on Twitter.

“Candidate Andrews I think is asking the people of his electorate to vote for him on Saturday but he does not have the decency to vote with them,” Kennett tweeted.

“What an insult to the voters in Mulgrave.”

After posting the photo, Andrews said he had a few “things on” on Saturday and needed to vote beforehand.

“Like so many other Victorians, we’ve got a few things happening on Saturday so we voted early and on the way to somewhere else,” he said in an Instagram caption.

At a press conference on Friday morning, Victorian opposition leader Matthew Guy said what Andrews does is “up to him” and said he would be voting in his Bulleen electorate on Saturday.

Election results could be delayed

The results of Victoria’s state election could be delayed, with the Victorian Electoral Commission bracing for a slower than usual vote count.

VEC director of communications Sue Lang said four million Victorians were enrolled to vote and about half had cast their ballots early, which could pose problems.

“The issue that creates for us a little bit is that because we’ve taken so many votes in the early voting centres, where they need to be counted, we will have 1700 voting centres tomorrow that will be staffed to count two million votes,” Ms Lang told ABC radio on Friday morning.

“But we have 155 early voting centres who need to count two million votes. So that might actually slow the count for us on Saturday night.”

The VEC is aiming to count 75 per cent of votes over the weekend, absentee votes will then be sorted to their correct districts and counted next week.

Postal votes must be mailed in before 6pm on Saturday night to be eligible.

Lang said the VEC is not permitted to begin counting votes until 6pm on Saturday.

Denial of responsibility! NewsConcerns is an automatic aggregator of the all world’s media. In each content, the hyperlink to the primary source is specified. All trademarks belong to their rightful owners, all materials to their authors. If you are the owner of the content and do not want us to publish your materials, please contact us by email – admin@newsconcerns.com. The content will be deleted within 24 hours.
Daniel AndrewsElectionNewsPoliticsVIC NewsVIC Politics
0
Share