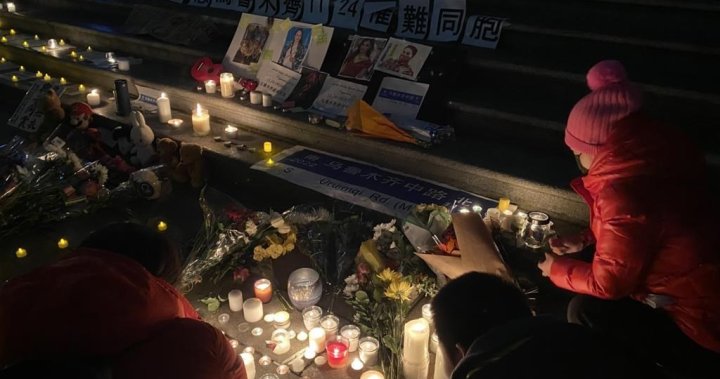 VANCOUVER – Hundreds of people have rallied in Vancouver in sympathy with rare protests that are sweeping across China in response to the country’s hardline zero-COVID lockdown policies.

The protesters outside the Vancouver Art Gallery Sunday night also mourned the deaths of at least 10 people in an apartment fire in the Xinjiang region that critics blame on the anti-virus controls that have restricted millions of people to their homes in China.

Protesters lit candles and held up blank sheets of paper, in what has become a Chinese symbol of dissent.

The crowd chanted slogans in English and Mandarin against the Chinese Communist Party and called on President Xi Jinping to step down.

Protests broke out over the weekend in at least 10 Chinese cities, including Beijing, Shanghai, Nanjing and Guangzhou, a scale that is highly unusual.

Xi’s government faces mounting anger at its zero-COVID policies that have shut down access to areas throughout China in an attempt to isolate every case at a time when other countries are easing controls.

— With files from The Associated Press

Denial of responsibility! NewsConcerns is an automatic aggregator of the all world’s media. In each content, the hyperlink to the primary source is specified. All trademarks belong to their rightful owners, all materials to their authors. If you are the owner of the content and do not want us to publish your materials, please contact us by email – admin@newsconcerns.com. The content will be deleted within 24 hours.
ChinaChina Covid Protestchina lockdown protestChina Protestchina protest canadachina protest vancouverCOVIDCOVID lockdown protest
0
Share