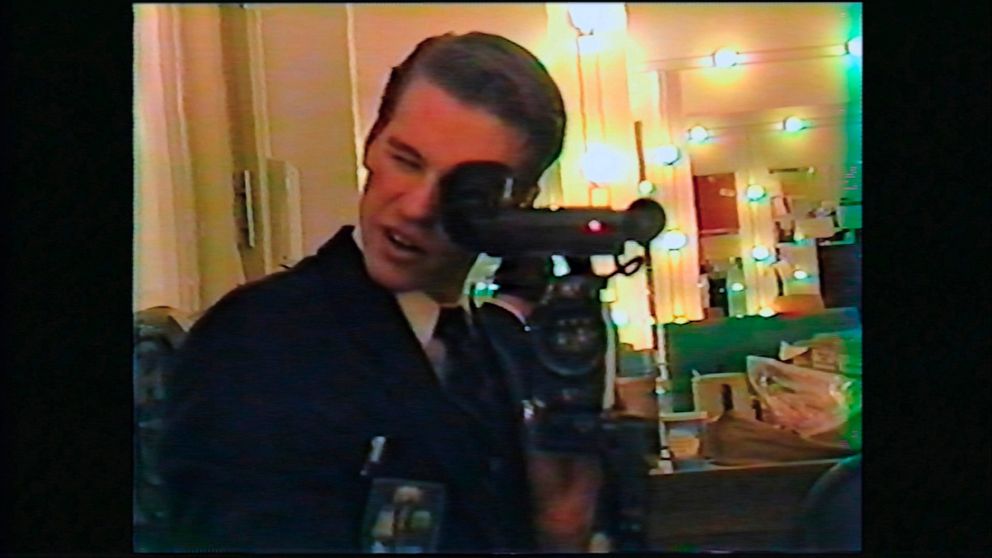 CANNES, France — Val Kilmer was in movies he wasn’t in.

The new documentary “Val,” bursting with footage Kilmer shot himself over his 61 years, includes home videos and backstage glimpses, as you might expect. But the most remarkable thing is seeing Kilmer’s own audition tapes of himself. It’s not just a few scenes here and there. They capture Kilmer living in parts — including some he never got to (officially) play.

There’s footage of him as Henry Hill in “Goodfellas.” Hamlet he privately tackled for years. He was so consumed with being in Stanley Kubrick’s “Full Metal Jacket” that Kilmer had a friend shoot him, in combat gear, trudging through a California swamp. In another clip, he shoots live rounds in the backyard.

“I’m a firm believer in magical realism ON and OFF the screen,” said Kilmer in an interview over email. “The transformation and/or manifestation of each character is really just PRAYER.”

“Val,” which a24 will open in theaters July 23 and Amazon Prime will debut Aug. 6, made its recent premiere at the Cannes Film Festival. Here in France to celebrate the occasion were his children, Mercedes and Jack Kilmer, and the directors Ting Poo and Leo Scott. Kilmer, who has difficulty speaking after throat cancer and numerous trachea surgeries, wasn’t able to attend.

But exchanging words over email from Los Angeles, Kilmer said he was feeling “blessed and grateful” as “Val” made its anticipated arrival. For years, the hours of tapes had just sat in boxes. But losing his voice has made Kilmer only want to tell his story — a boundless life of full-hearted abandon — all the more.

Kilmer, himself, tends to view his life with mystical harmony and a sense of destiny. That the documentary happened — through a confluence of people and events — he says is “once in a lifetime.”

And for much of Kilmer’s life, he was self-documenting it. It started with 16mm short films and movie parodies with his brother, Wesley, who died in childhood after an epileptic fit in a Jacuzzi. Forever after, like a habit solidified by grief, Kilmer often had a camera in his hands. In “Val,” we see him shooting fresh-faced Sean Penn and Kevin Bacon backstage on Broadway in “Slab Boys”; in his trailer while shooting “Top Gun”; prodding Marlon Brando and warring with director John Frankenheimer on “The Island of Dr. Moreau.”

“My brother Wesley and my mother are both alive in the film,” Kilmer says. “Seeing that footage and the movies and art created by Wesley within the context of the rest of the story is extremely meaningful. I lost my mother during the shoot, so I’m more and more emotional with each viewing. There are laughs. There are tears.”

Scenes like the one he made on “The Island of Dr. Moreau” helped give Kilmer a reputation as a “difficult” actor. But in “Val,” we see an actor driven less by ego than extreme, even manic dedication.

Kilmer, the youngest actor ever accepted to Julliard when he went, experienced the ups and downs of fame more dramatically than most. His break came in 1984’s “Top Secret!” one of relatively few movies that traded on his talent for comedy. (Another, decades later, was “Kiss Kiss Bang Bang.”)

“He’s the funniest person I know,” says Jack Kilmer, 26, sitting alongside his 29-year-old sister in Cannes. “Everyone who knows him is like: He is so funny. He should do more comedies. All his best friends, the jokes are nonstop. Yet he’s known as a serious, dramatic actor.”

“Val” is narrated by Kilmer but voiced, movingly, by Jack. His son looks and sounds like Kilmer, who wrote the narration sporadically, in text messages and scrap books. About halfway through the film, the directors say they forget it isn’t Val. In one scene, the filmmakers capture Jack, in a recording booth, pausing to ask if one of his dad’s stories — a new one to him – is really true.

“Our dad has so many stories,” says Jack. “You never know what you’re going to get when you hang out with him. He’ll just drop a story on you. It’s kind of like the experience of watching this movie.”

For Jack and Mercedes there were other epiphanies. They had only seen some of the tapes.

“I had ever seen footage of my parents’ wedding before Leo showed me,” says Mercedes, who lives next door to her father.

“We’ve been sitting on this movie for a long time,” says Jack. “Definitely our whole lifetime.”

Kilmer’s biggest breakthrough, of course, was “Top Gun,” a movie he recalls not initially wanting to do. “I thought the script was silly and I disliked the warmongering in the film,” he narrates in the documentary. On Tony Scott’s set, he was more energized by the film. For the rest of his life, he says, “I will be called Iceman by every pilot at every airport I ever go to.”

But Kilmer’s resistance to being pigeonholed and typecast lasted forever. “Willow,” “Batman Forever,” “The Doors,” “Tombstone,” “The Saint,” “Heat.” Scott first encountered Kilmer while working with him on Harmony Korine’s short, in which Kilmer played himself, for the 2012 VICE project “The Fourth Dimension.”

Scott, captivated by Kilmer’s freewheeling energy to create (he remembers the actor sending in videos of himself from Home Depot), kept on working with him. Together they mounted one of Kilmer’s largest undertakings, the one-man stage show “Citizen Twain,” in which he played Mark Twain.

“I wandered my ranch talking to myself for years in advance of workshopping the one-man show,” says Kilmer, who more recently sold his 6,000-acre New Mexico ranch.

Kilmer’s outlook is, as ever, enthusiastic. He continues to create in myriad ways — collages, an upcoming book of poetry that a24 will publish. He keeps a studio in Hollywood that he lends space to an inner-city theater program. And Hamlet? “Don’t count me out,” he says. “The best is yet to come.”

“I have no regrets,” adds Kilmer. “I’ve witness and experienced miracles.”

Denial of responsibility! NewsConcerns is an automatic aggregator of the all world’s media. In each content, the hyperlink to the primary source is specified. All trademarks belong to their rightful owners, all materials to their authors. If you are the owner of the content and do not want us to publish your materials, please contact us by email – [email protected]. The content will be deleted within 24 hours.
Arts and entertainmentCaliforniaDocumentariesEntertainmentFilm festivalsHarmony KorineJack KilmerJake Coyle
0
Share