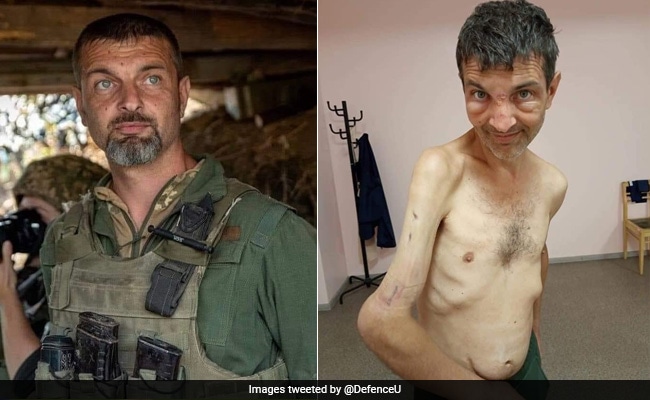 Mykhailo Dianov was one of 205 Ukrainian prisoners of war released on Wednesday.

Shocking pictures of a Ukrainian soldier who survived Russian captivity have surfaced on social media. The Ukrainian defence ministry shared the pictures of Mykhailo Dianov on Twitter and called him one of the lucky ones despite him appearing emancipated and with injuries on his face and arms.

“Ukrainian soldier Mykhailo Dianov is among the fortunate ones: in contrast with some of his fellow POWs, he survived Russian captivity,” the defence ministry wrote in the caption. “This is how Russia “adheres” to the Geneva Conventions. This is how Russia continues the shameful legacy of Nazism,” it added.

Ukrainian soldier Mykhailo Dianov is among the fortunate ones: in contrast with some of his fellow POWs, he survived russian captivity. This is how russia “adheres” to the Geneva Conventions. This is how russia continues the shameful legacy of Nazism. pic.twitter.com/cJpx7ZWQYo

According to Telegraph, Mr Dianov was detained earlier this year after fighting to defend the Azovstal steel works in Mariupol. He was one of 205 Ukrainian prisoners of war released on Wednesday.

Mr Dianov’s latest pictures show him emancipated, covered in scars and bruises on his arm and face. His sister, Alona Lavrushko, reportedly informed that Mr Dianov is currently in Kyiv Military Hospital, where he remains in a serious condition and will require long-term treatment.

Ms Lavrushko said that shrapnel in his brother’s arm was pulled out “without anaesthetic, without anything, using rusty pliers”. She stated that Mr Dianov’s arm is missing 4cm of bone due to the inhumane conditions he faced in Russian captivity.

“The doctor in the military hospital has taken a look at him. They’re not going to operate on him just yet; he needs to gain some weight first. That’s the main thing because he can’t be operated on in his condition. It could be dangerous for his health. So he has to recover now and gain strength. His physical condition is serious, of course,” Ms Lavrushko added, as per the outlet.

However, she also said that Mr Dianov is mentally very strong. “He is extremely happy that he is back. He says, ‘I am walking and breathing clean free air,'” Mr Lavrushko said.

Money is now being raised to help Ms Lavrushko pay for her brother’s medical fees. Mr Dianov’s daughter has started a fundraiser for the soldier’s treatment and rehabilitation.

Denial of responsibility! NewsConcerns is an automatic aggregator of the all world’s media. In each content, the hyperlink to the primary source is specified. All trademarks belong to their rightful owners, all materials to their authors. If you are the owner of the content and do not want us to publish your materials, please contact us by email – admin@newsconcerns.com. The content will be deleted within 24 hours.
AzovstalMariupolMykhailo DianovPrisoners of WarRussiarussia ukraine warRussia-Ukraine War Latest NewsUkraine
0
Share

power grid share price: Big Movers on D-St: What should investors do with Power Grid, Piramal Enterprises and RBL Bank?