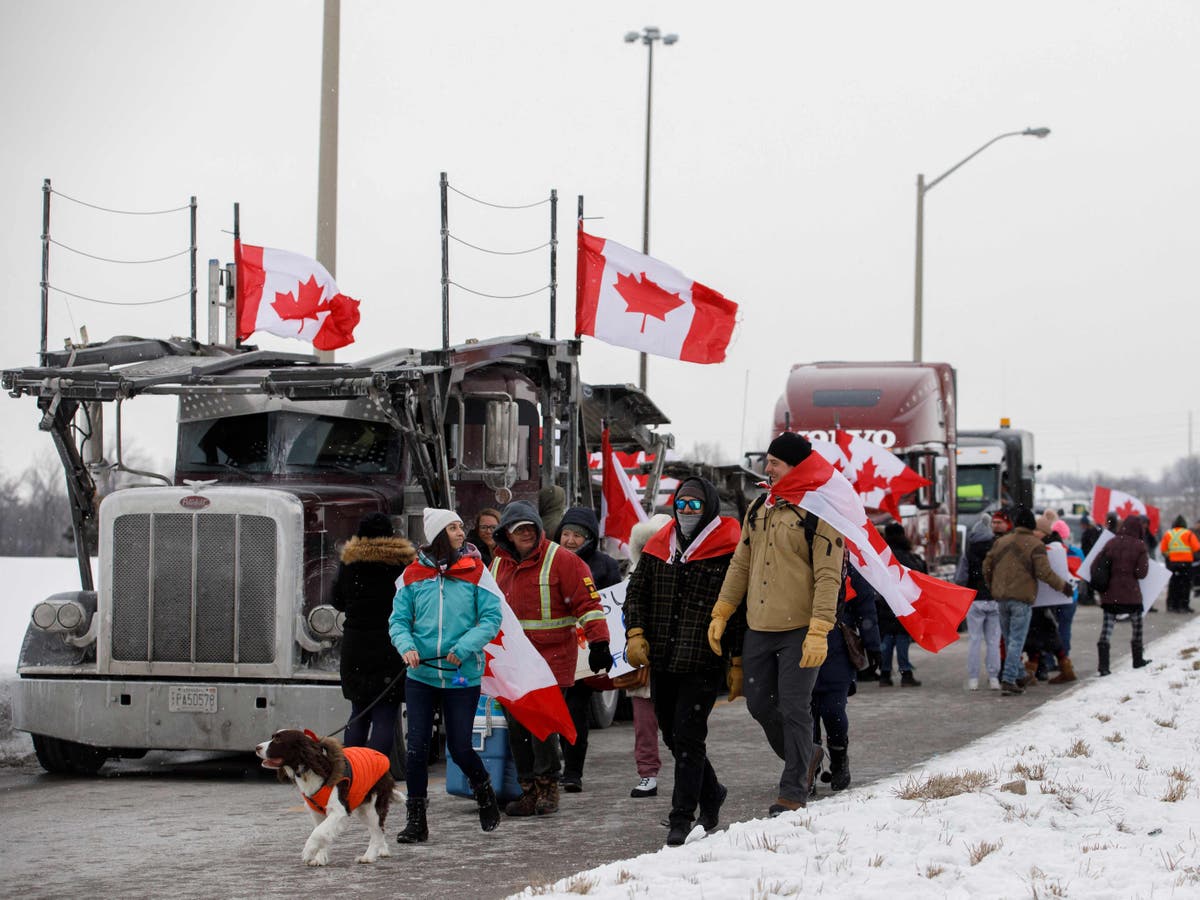 A convoy of truckers opposed to Covid-19 vaccine mandates made its way through southwestern Ontario on Thursday, as it continues its snaking journey through the heart of Canada.

The protest is being organized by Canada Unity, a group that opposes Covid-related measures.

Its leaders want prime minister Justin Trudeau and his government to drop the vaccine mandate for truckers crossing the Canada-US border and do away with other public health protections.

The Canadian federal government instituted vaccine mandates for cross-border truckers throughout the country. But as many as 32,000, or 20 per cent, of the 160,000 Canadian and American cross-border truck drivers may be taken off the roads due to the mandate, according to the Canadian Trucking Alliance (CTA).

Some high-profile vaccine-sceptics, such as Elon Musk and Joe Rogan, have praised the protesting truckers. Mr Rogan stated that Canada is “in revolt”, with the Toronto Sun claiming that up to 50,000 truckers will end up completing the journey to the capital.

By contrast, Prime Minister Trudeau has characterised the protesters as a “small fringe minority who are on the way to Ottawa who are holding unacceptable views.”

More protest trucks are rolling into Parliament Hill, Ottawa, honking noisily as crowds cheer them on.

Demonstrators welcoming the vehicles waved Canadian flags and protest signs, bearing messages like “There must be choice” and “Truck off Trudeau.”

Protesters’ trucks have begun arriving outside Canada’s parliament in Ottawa, videos from local journalists show. Crowds cheered the vehicles as they rolled in.

A large crowd lined the sides of the road to welcome the trucker convoy in Quebec on Friday morning, as it continued onto Ottawa.

While local police suggested that the number of vehicles in the convoy is far less than early reports indicated, the crowd that met the trucks just outside of Quebec looked to be strong.

“#Quebec loves #freedom!!! The east coast trucker convoy was greeted warmly this morning in Quebec!” one supporter tweeted out, along with a video showing some of the crowd by the roadside cheering the drivers on.

Tucker Carlson’s interview with ‘Freedom Convoy’ spokesperson Ben Dichter on Fox News saw him reveal that the group has dual objectives. While its opposition to vaccine mandates is well documented, Mr Dichter also explained how vaccine passports are the “really concerning” development in Canada.

“We want to get rid of the vaccine mandates and the (vaccine) passports. And that passport, that’s the really concerning one,” the controversial spokesperson stated on Fox News last night.

Mr Dichter also repeated the unsubstantiated claim that the Canadian border patrol has access to people’s phones and can track truckers to ensure they all have the vaccine.

The official Twitter account of Kingston Police in Ottawa provided a truck convoy update at midday on Friday, claiming that just 121 trucks were present.

According to the department’s account, it registered 121 trucks, 421 passenger vehicles, and six RVs.

“As of 9:35 am all roads have reopened and all trucks and passenger vehicles have departed #ygk and are now EB on Hwy 401,” they added, indicating that the smaller than expected convoy is once again on the move.

Some reports previously suggested that up to 50,000 trucks were involved in the protest against vaccine mandates, but that figure has since been disputed by local police.

A group of Canadian long-haul truck drivers are travelling cross-country from British Columbia to Ottawa as part of a “Freedom Convoy” to protest the imposition of Covid-19 vaccine requirements upon their industry.

Until Saturday 15 January 2022, Canada’s lorry drivers were granted a federal exemption from vaccine requirements to enable them to cross the border into the US and back without having to show proof of inoculation against the coronavirus.

Now that privilege has expired, unvaccinated drivers returning from the US face having to quarantine for 14 days, although this requirement would only apply to a minority of around 16,000 drivers given that 85 per cent of their colleagues have had their jabs.

But those who will be impacted by the new rules are incensed, and duly banded together to embark from Prince Rupert in the far west of British Columbia on Sunday 23 January to make the epic 2,443-mile journey to Parliament Hill in the nation’s capital in time to attend a rally scheduled for Saturday 29 January.

Joe Sommerlad has the full story:

A series of TikTok videos have been shared by a right-wing journalist on Twitter, which purport to show the extent of the Canadian truckers protest – and the disdain many have for the nation’s Prime Minister, Justin Trudeau.

“It really is fun. There’s a festival feeling to it. Trudeau’s rage is showing; the convoy is full of happy warriors,” one video is captioned by Rebel News’ Ezra Levant. The TikTok in question also features a “F**k Trudeau” flag in the foreground as the trucks roll by.

As many as 50,000 vehicles are expected to continue the long journey to Ottawa on Friday, in what is a mass protest movement against vaccine mandates for drivers who cross over the Canadian-US border.

Controversial podcast host Joe Rogan has spoken out on the Canadian trucker protest, appearing to sympathise with the cause.

During Thursday’s episode of the Joe Rogan Experience, he told his guest, freediver and Canadian citizen Valentine Thomas, “your country’s in revolt, do you know about this?”

Mr Rogan adds: “Apparently [the truckers are] all being mandated to get vaccinated, and they’re all like ‘hey, we don’t even contact anybody.’”

US truckers to join ‘Freedom Convoy’ on Saturday

According to Canadian Trucking Magazine publisher Dave MacKenzie, some US truckers are driving from North Dakota to Portal Saskatchewan, where they intend to cross the border and join their Canadian counterparts’ protest.

“Others are just driving in convoys in the US to show support,” he told West Standard Online. “The number of US drivers has gone from hundreds, to thousands, to hundreds again.”

MacKenzie explained travel costs are a large factor contributing to drivers’ ability to stay with the protest convoys.

Truckers left from British Columbia on Sunday and will be met in the nation’s capital on Saturday by other protesters driving from the east and the south of the country – as well as those from the States.

The Toronto Sun estimates that up to 50,000 trucks could be participating, which would exceed the existing record by around 10 times if the convoy stays intact until all the way to Ottowa.

The crowdfunding platform GoFundMe says it has released an initial $1 million of the $6.2 million intended to support a convoy of truckers (and their supporters) which is currently headed for Ottowa.

As CBC reports, the fundraising page was launched earlier this month by Tamara Lich to take donations to cover the convoy’s fuel, food and lodging expenses – which is protesting against vaccine mandates for Canadian truckers.

Earlier this week, GoFundMe said it was holding back the funds until it received more details about the group and its financial management.

A spokesperson for GoFundMe stated on Thursday that the organizer has provided a distribution plan and the withdrawn funds are being used to cover participants’ fuel costs.

They added that the platform is working with the organizers to release the rest of the money once participants have been reimbursed for their expenses.