TRAIKOS: What were the rebuilding Blackhawks thinking by trading DeBrincat to the Senators? 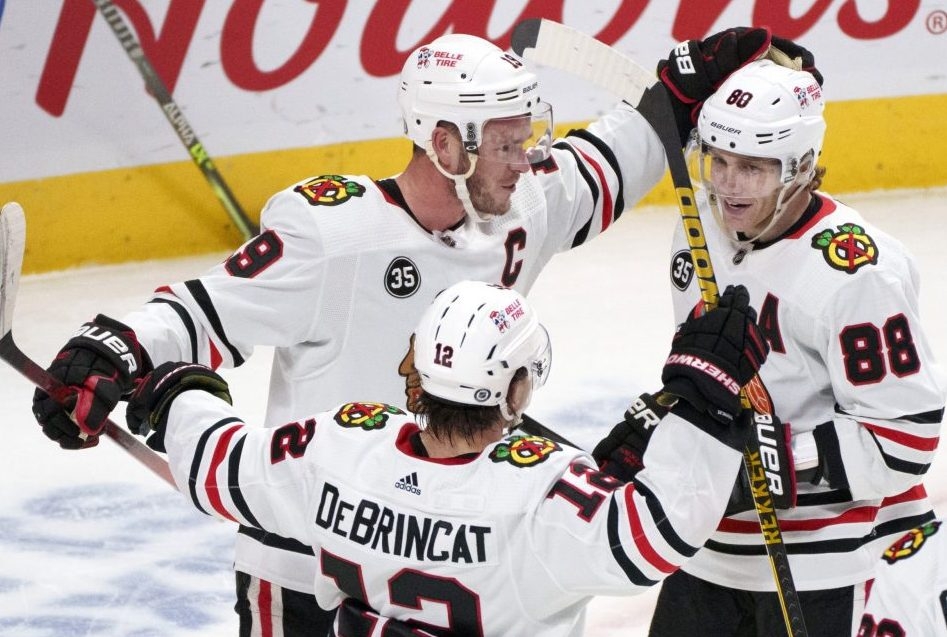 MONTREAL — What were the Chicago Blackhawks thinking?

More importantly, what must be going through the minds of Patrick Kane and Jonathan Toews after the team traded two-time 40-goal scorer Alex DeBrincat to Ottawa for a package of picks at the NHL Entry Draft on Friday.

With the trade, which sent first- and second-round selections in 2022 to Chicago, along with a third-rounder in 2024, it’s official: the Blackhawks are tanking.

The only question is whether Kane and Toews are willing to go along for the ride to the bottom of the standings. Based on Toews’ comments after the team sent Brandon Hagel to the Tampa Bay Lightning at the deadline, don’t bet on it.

After all, it’s one thing to rebuild. But considering Hagel is 23 and Debrincat is 24 — young enough where they would still be in their prime after Chicago presumably turns the corner — this makes zero sense.

“Yeah, if Hags is the guy to get traded, if he’s not a guy that’s a part of a rebuild, then I don’t know,” Toews told The Athletic in March. “I don’t know if anyone feels safe at this point, with the way he’s been playing and what he’s meant to our team. I had a hard time thinking in my mind that he would be one of the guys to get shipped off, considering what he brought in. Yeah, that was a tough one to see. I’m pretty shocked, for sure.”

Both Kane and Toews are in the final year of their contracts, with each carrying a $10.5-million cap hit. But both also have full no-movement clauses, meaning it’s up to Kane and Toews to determine if they want to spend their final days on a rebuild.

It looks like that probably won’t be the case.

Days after Philadelphia Flyers goalie Ivan Fedotov was detained by the Russian military on charges that he attempted to evade military service, NHL commissioner Gary Bettman was unsure if other players might be at risk after returning home for the summer.

“We probably don’t have the full story as to what’s going on in terms of what each player’s relationship is in Russia with respect to the government,” said Bettman. “And we’re going to have to respect the process as to what goes on.

“I think it’s probably not a good idea for us or for clubs to get involved in the politics of what’s going on in Russia.”

Further to that, Bettman said he never contemplated removing Russians from the draft.

“I don’t think that would be appropriate,” he said. “I saw there was a report that said we were advising clubs not to draft Russians. That’s not true. Clubs will draft anybody who’s draft eligible. But obviously if you draft a player from a particular country may be impacted by the likelihood that you can get him on a player. And there is a lot of uncertainty that the clubs are going to have to deal with.”

BETTMAN VOWS GET TO THE BOTTOM OF ABUSE ALLEGATIONS

Hockey Canada may have botched its investigation into the alleged sexual assault involving several junior players at a sanctioned event. But the NHL plans on being more complete, even if it takes weeks or months to uncover what really went on.

“The timeline is incomplete,” Bettman said of the NHL’s investigation into the alleged gang rape of a woman at a Hockey Canada gala in June, 2018. “We require the cooperation of a lot of people to actually get to the bottom of this. We’re going to try to do as thorough an investigation as possible to see if we can learn more than obviously Hockey Canada was able to make us aware of, either because they didn’t know the information or there was some limitations. But our goal is to get to the bottom of this and get a full understanding as to what actually happened by whom.”

When asked if hockey has a culture problem, Bettman shook his head.

“I think there are problems that are experienced in all sports and throughout society that are unacceptable. And i don’t think we’re any different tan anybody else,” he said. “This was horrible. This was horrific. This was unacceptable. But with everybody involved being anonymous, this is a daunting challenge to try and understand exactly what happened. But we’re going to try our best.”

Let the bidding war for Darcy Kuemper to begin.

The Stanley Cup champion goaltender appears to be headed to unrestricted free agency on June 13 after the Colorado Avalanche acquired goaltender Alexandar Georgiev from the New York Rangers in exchange for a third-round and fifth-round selection in the 2022 NHL Draft, as well as a third-round pick in the 2023 NHL Draft.

Expect Kuemper to have plenty of suitors, most notably from Toronto and Edmonton. And considering that the journeyman goalie is 32 years old, it could be term — not salary — that ultimately decides where he ends up signing.

While their new rink is being built, the Arizona Coyotes will be playing next season in a 5,000-seat multi-purpose arena belonging to Arizona State. But with two-thirds of their tickets already sold, the team’s president and CEO believes the temporary environment could create a considerable amount of buzz for the rebuilding franchise.

MALKIN WANTS TO REMAIN IN PITTSBURGH

One down, one more to go.

With Kris Letang signing a six-year, $36.6-million contract extension to remain with the Penguins, the focus now will shift to pending free agent Evgeni Malkin, who congratulated his teammate on Twitter, while also leaving open the door on a potential return to Pittsburgh.

“I hope I don’t have to play against you,” tweeted Malkin.