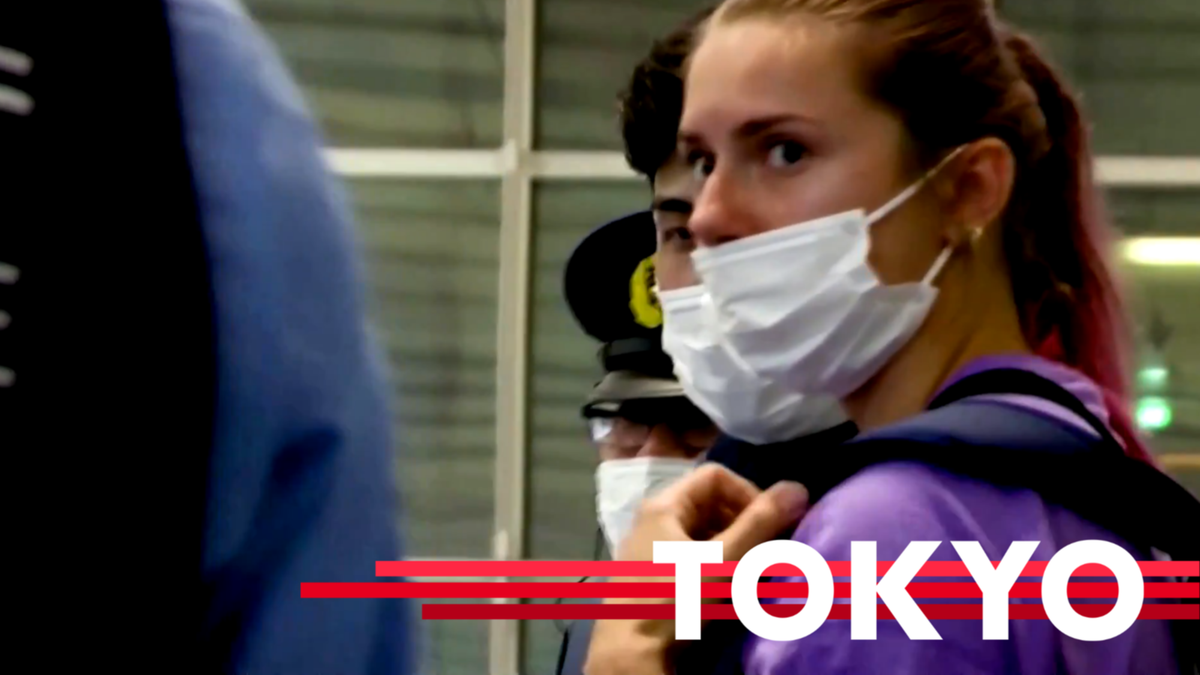 A Belarusian Olympic sprinter plans to seek asylum in Poland, an activist group said on Monday, after the athlete alleged her team’s officials tried to force her to fly home, where she feared she wouldn’t be safe from an autocratic government that recently was accused of diverting a plane in order to arrest a dissident journalist.

Athlete Krystsina Tsimanouskaya received a humanitarian visa from the Polish embassy in Tokyo, according to a Polish Foreign Ministry official.

The Belarusian Sport Solidarity Foundation, an activist group that is helping the runner, told The Associated Press that the group bought her a plane ticket to Warsaw for August 4.

The current standoff apparently began after Tsimanouskaya criticized how officials were managing her team – setting off a massive backlash in state-run media back home, where authorities relentlessly crack down on government critics.

Tsimanouskaya said on her Instagram account that she was put in the 4x400m relay even though she has never raced in the event.

She was then apparently hustled to the airport but refused to board a flight for Istanbul and instead approached police for help.

In a filmed message distributed on social media, she also asked the International Olympic Committee for assistance.

“I was put under pressure, and they are trying to forcibly take me out of the country without my consent,” the 24-year-old runner said in the message.

The rapid-fire series of events brought international political intrigue to an Olympics that have been more focused on operational dramas, like maintaining safety during a pandemic and navigating widespread Japanese opposition to holding the event at all.

Belarus’ authoritarian government has relentlessly targeted anyone even mildly expressing dissent since a presidential election a year ago triggered a wave of unprecedented mass protests. And it has also gone to extremes to stop its critics, including the recent plane diversion that European officials called an act of air piracy.

In this context, Tsimanouskaya feared for her safety once she saw the campaign against her in state media, according to the sports foundation.

“The campaign was quite serious and that was a clear signal that her life would be in danger in Belarus,” Alexander Opeikin, a spokesman for the foundation, told the AP in an interview.

Vadim Krivosheyev, also of the foundation, said she planned to seek asylum.

Underscoring the seriousness of the allegations, several groups and countries say they are helping the runner.

Poland and the Czech Republic offered assistance, and Japan’s Foreign Ministry said it was working with the International Olympic Committee and the Tokyo Olympics organizers.

The IOC, which has been in dispute with the Belarus National Olympic Committee ahead of the Tokyo Games, said it had intervened.

“The IOC … is looking into the situation and has asked the NOC for clarification,” it said in a statement.

Many critics of Belarus’ government have fled to Poland.

“Poland will do whatever is necessary to help her to continue her sporting career. Poland always stands for Solidarity,” he said.

Outside the Polish embassy Monday, two exiled Belarusian women who live in Tokyo offered the runner support. They waved a flag that was a mix of the opposition’s banner and the Japanese flag.

“If she decides to accept it, we’ll do our maximum to help her,” he wrote.

The Belarus National Olympic Committee has been led for more than 25 years by authoritarian President Alexander Lukashenko and his son, Viktor.

Both Lukashenkos are banned from the Tokyo Olympics by the IOC, which investigated complaints from athletes that they faced reprisals and intimidation during the crackdown following the wave of anti-government protests over the last year.

“Lukashenko perceives all criticism as part of a plot by Western countries,” said Valery Karbalevich, an independent Belarusian political analyst.

“Tsimanouskaya’s protest is viewed as part of a broader movement of hundreds of Belarusian athletes who stood against the beatings of peaceful demonstrators and for a year have been taking part in street rallies.”

A spokeswoman for the Belarus Olympic team did not respond to a request for comment.

The standoff over Tsimanouskaya comes just months after the dramatic diversion of a passenger plane flying between two EU countries.

Belarusian authorities ordered the plane to land in Minsk – and pulled journalist and activist Raman Pratasevich and his Russian girlfriend off the flight.

The elder Lukashenko maintained that there was a bomb threat against the plane and that’s why a fighter jet was scrambled to force it to land, but the move was roundly criticized by Western leaders.

Pratasevich, who ran a channel on a messaging app used to organize demonstrations against Lukashenko’s rule, left his homeland in 2019.

He has been charged with fomenting mass unrest and is under house arrest while he awaits trial.

Amid Monday’s drama, Tsimanouskaya missed the Olympic 200-metre heats that she was due to participate in.

She already competed for Belarus on the first day of track events Friday at the National Stadium in Tokyo. She placed fourth in her first-round heat in the 100 metres, timing 11.47 seconds, and did not advance.

Denial of responsibility! NewsConcerns is an automatic aggregator of the all world’s media. In each content, the hyperlink to the primary source is specified. All trademarks belong to their rightful owners, all materials to their authors. If you are the owner of the content and do not want us to publish your materials, please contact us by email – admin@newsconcerns.com. The content will be deleted within 24 hours.
NewsOlympicsPoliticsSportWorld News
0
Share

How to make up your mind when the glass seems half empty? — ScienceDaily