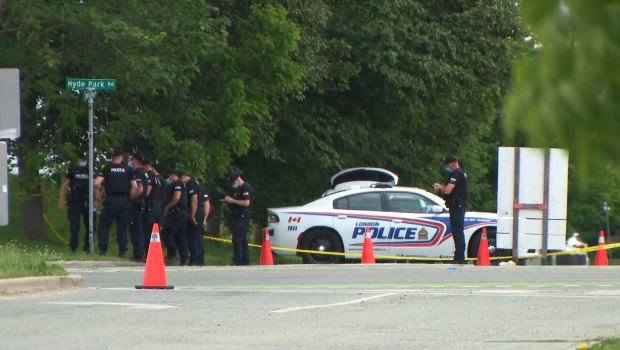 A timeline of the vehicle attack in London, Ont., that killed four members of a Muslim family and seriously injured a nine-year-old boy on Sunday

Prime Minister Justin Trudeau and Ontario Premier Doug Ford are expected to attend a vigil for five members of a Muslim family who police say were the victims of a deliberate attack.

The vigil will be held outside the London Muslim Mosque this evening.

Ford says Sunday’s attack — in which four people died and a nine-year-old boy was injured — has left the province in mourning.

As a result, he says all government events are cancelled today to allow the family and community to grieve.

Pakistan’s prime minister is denouncing a vehicle attack that killed four members of a Muslim family in London, Ont., as an act of terror rooted in Islamophobia.

He says Islamophobia must be countered “holistically” by the international community.

Friends of the victims say the family was well known within the London Pakistani-Muslim community.

A statement from the family identifies those lost as the Afzaal family. Salman Afzaal, his wife Madiha and their daughter Yumna, along with Yumna’s grandmother all died in the attack. Their son, nine-year-old Fayez was seriously injured.

Public Safety Minister Bill Blair is calling the vehicle attack on members of a Muslim family in London, Ont., “an horrific act of Islamaphobia” and says federal resources are available to assist London police in their investigation, if they require it.

Blair says in a statement that the RCMP have been in touch and offered their full support, and that the Integrated National Security Enforcement Team is engaged with the investigation and is working with local police.

Conservative Leader Erin O’Toole says reports that a vehicle attack that killed four people in London, Ont., was motivated by the fact the victims were Muslim is “horrific and heartbreaking.”

In a series of social media posts, O’Toole expressed his deepest condolences to the family and friends of the victims, adding that such acts of “vile and extreme hatred must be condemned.”

He called the incident an “Islamophobic act of terror,” which he says has no place in Canada.

The Thames Valley District School Board says one of the victims who died in a vehicle attack in northwest London, Ont., that police have described as hate-motivated was a student at Oakridge Secondary School.

The statement, issued by the board’s director of education as well as the chair, says the student will be “deeply missed by fellow students and staff,” and the loss will be felt across the entire school board.

It notes the student’s name is being withheld at the request of the family.

The statement says a traumatic events response team will be at the school, as well as others that are affected, for as long as necessary and flags outside all the board’s schools will be lowered until June 11.

It says the board remains “steadfastly committed to combating racism, Islamophobia, and discrimination in all its forms.”

A memorial is growing at the site of the vehicle attack in northwest London, Ont., that killed four members of the same family and injured a young boy.

Flowers were seen piled at the street corner by the end of the day on Monday, nearly 24 hours after the incident.

Police said the family of five were waiting to cross the road at the intersection when a black pickup truck mounted the curb, struck them and drove away.

Police have identified the suspect in the London, Ont., vehicle attack as Nathaniel Veltman.

The 20-year-old was arrested at a mall parking lot seven kilometres from the scene where police say he allegedly struck the family who were waiting to cross the street on Sunday.

Veltman is facing four counts of first-degree murder and one of attempted murder.

Prime Minister Justin Trudeau says he stands with the Muslim community in London, Ont., and with Muslims across Canada in the wake of a vehicle attack that killed four people on Sunday.

He offered solidarity for the loved ones of those who were “terrorized” by the “act of hatred,” and expressed sympathy for the injured child.

Trudeau says Islamophobia has no place in our communities.

The National Council of Canadian Muslims says it is “beyond horrified” by the deadly vehicle attack that killed four members of a Muslim family in London, Ont., Sunday.

He says Muslims in Canada are too familiar with the violence of Islamophobia, with recent attacks on Muslim women in Alberta and the 2017 Quebec City mosque massacre.

The leader of the federal New Democrats says the killing of a Muslim family in London, Ont., is “an act of Islamophobia & terror.”

He’s calling on Canadians to stand with their Muslim family, friends and neighbours against hate.

A spokesman for a London, Ont., mosque says the community is grappling with fear, devastation and anger in the wake of a vehicle attack that killed four members of a Muslim family.

He described the group as “a great family, a God-fearing family and really a joy to be around.”

He says the community is coming together to “make sure these acts of hate are met with even greater acts of love.”

Ontario Premier Doug Ford says justice must be served “for the horrific act of hatred” that occurred in London, Ont., on Sunday.

Ford issued a statement offering thoughts and prayers to the victims’ families and friends.

He says hate and Islamophobia have no place in Ontario.

Ford made the comments after police said the family struck and killed by a vehicle were targeted because of their Muslim faith.

The mayor of London, Ont., says the killing of four Muslim pedestrians Sunday evening was an “act of mass murder.”

Ed Holder made the comments after police said the motorist who killed the four relatives did so deliberately.

A nine-year-old boy remains in hospital in serious condition.

Police in London, Ont., say a family of five who were struck by a vehicle on Sunday were targeted because they were Muslims.

Four family members were killed and one person remains in hospital.

Police say the 20-year-old man facing four counts of first-degree murder and one count of attempted murder did not know the victims.

Police confirm one person died at the scene and several others have died in hospital. The area of the crash remains closed to traffic.

London police confirm multiple fatalities in the collision and that one person is in custody.

Three adults and two children are struck by pickup at the northwest London, Ont. intersection of South Carriage Road and Hyde Park Road.

– With files from CTV News London

What Are You Looking Forward to This Summer?