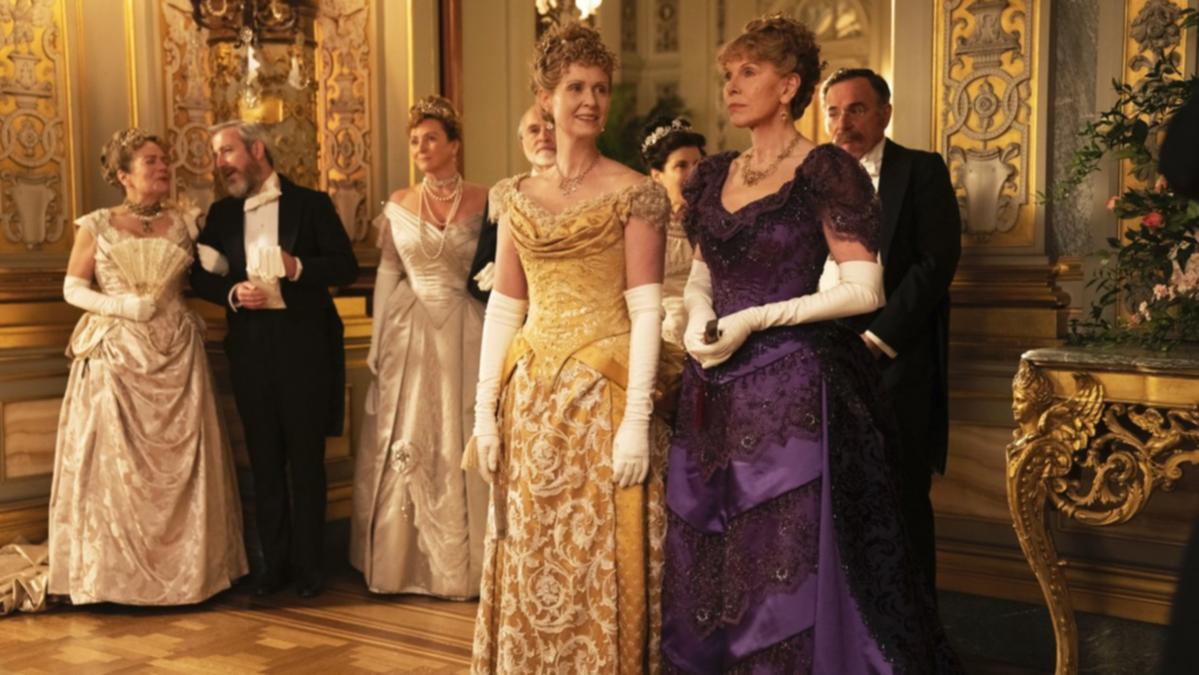 Fans of Downton Abbey and Bridgerton, your next binge-watch show is here.

It’s been described as “Sex and the City goes Victorian” and an American version of Downton.

IN THE VIDEO ABOVE: Downton Abbey start Michelle Dockery gets engaged

But is it any good?

The Gilded Age isn’t telling a tremendously new story, but it is a very well-done piece of prestige, period piece escapism.

And it should also help cement the welcome trend of telling more diverse stories in historical dramas.

The Gilded Age starts in the year 1882 and follows a young woman, Marian Brook, who moves from Pennsylvania to New York City to live with her well-off aunties.

The show, 10 years in the making, was originally designed as a New York City-set prequel centered on the coming-of-age of the beloved Duchess Cora Crawley, played by Elizabeth McGovern in Downton.

But during the series’ decade-long journey to production, its identity as a direct Downton prequel disappeared.

In its final form, the show borrows from several storytelling classics, including Romeo and Juliet.

Two warring families live directly across from Central Park, at the corner of 5th Avenue and 61st Street.

Despite their hatred of each other, each family has sons and daughters of the right age and with varying levels of attraction to each other.

On one side of the block sits the longtime home of the van Rhijn family, currently owned by the widowed Agnes van Rhijn (Christine Baranski), who endured decades of an abusive marriage to earn her family’s spot in old-money New York.

Watch the official trailer in the video below

On the other side of the block, the new money, newcomer Russells have just finished building their ultramodern palace of a home.

Husband George (Morgan Spector) is a railroad builder and wannabe monopolist, wife Bertha (Carrie Coon) is a social striver who pushed the family to relocate from downtown.

Baby scions son Larry (Harry Richardson) and daughter Gladys (Taissa Farmiga) remain mostly unaware of how ferociously their parents are working to create a space for them in the upper echelons.

It’s an age-old plot, but The Gilded Age arrives with a racial and social awareness its Downton Abbey forebears did not.

This awareness is part of a longer-term trend toward colour consciousness adopted with varying levels of success by shows such as Sanditon.

The time it took to make The Gilded Age may ultimately be a blessing.

The show keeps all the familiar tropes of bustling servants, call bells, sweeping vistas of gorgeous houses, and a costume closet to die for.

Baranski brings all the ferociousness of Maggie Smith’s famed Dowager Countess to her role as Agnes, and when she and Coon’s Bertha Russell finally meet, the verbal fireworks are worth the build-up.

The Gilded Age is now available to stream in Australia on Paramount+.

Denial of responsibility! NewsConcerns is an automatic aggregator of the all world’s media. In each content, the hyperlink to the primary source is specified. All trademarks belong to their rightful owners, all materials to their authors. If you are the owner of the content and do not want us to publish your materials, please contact us by email – admin@newsconcerns.com. The content will be deleted within 24 hours.
EntertainmentPop Culturetv
0
Share