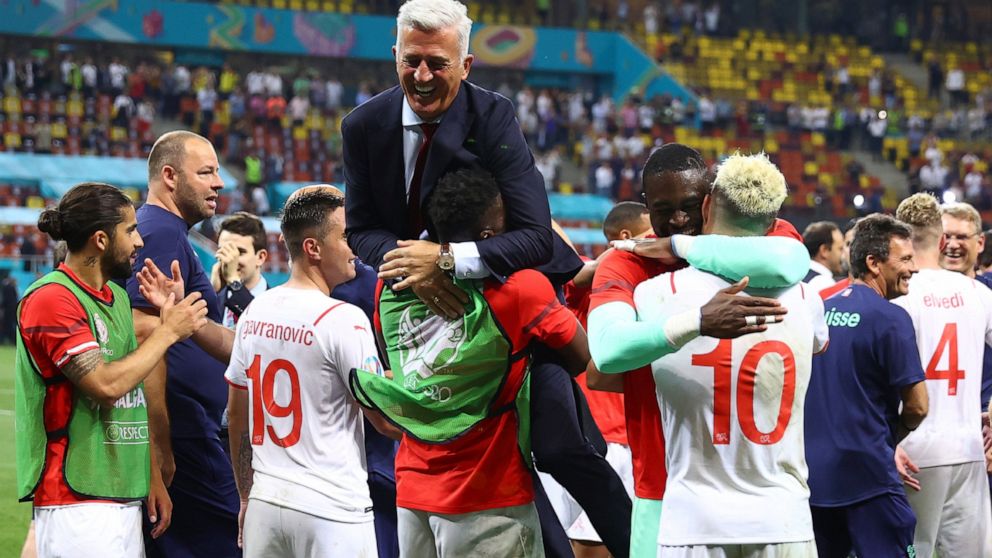 The Switzerland goalkeeper, who left in the middle of the European Championship’s group stage to be with his wife for the birth of their second daughter, made the biggest save of his life against one of the best players in the world.

That gave the Swiss a 5-4 penalty shootout victory over World Cup champion France on Monday and a spot in the quarterfinals of a major soccer tournament for the first time in 67 years. The match had finished 3-3.

Sommer dived to his right to save the final penalty by Kylian Mbappé, the young France forward who became a superstar at the last World Cup by scoring in the final.

“I think that everything we had in us, we left out on the field,” Sommer said. “I’m unbelievably proud of this team, how we’ve done it this evening.”

Sommer, who flew back to Germany after the team’s 3-0 loss to Italy to be home when his daughter was born on June 16, made the decisive save on the 10th penalty after the previous nine had all been successful.

“What an evening of football,” Sommer said. “It was our chance to finally go through the round of 16, because we never made it before. It’s incredible. We played with heart and with character. It’s amazing.”

The Swiss haven’t reached the quarterfinals at a major tournament since they hosted the World Cup in 1954. This team also ended a run of three consecutive exits in the round of 16. They were knocked out by Poland after losing a penalty shootout 5-4 at Euro 2016.

“We made history tonight,” Switzerland captain Granit Xhaka said. “We are all very proud.”

The Swiss will next play Spain in the quarterfinals on Friday in St. Petersburg.

It was the third game in the round of 16 at Euro 2020 to go to extra time but the first to be decided by penalties.

Haris Seferovic put Switzerland in the lead with a header in the 15th minute as France struggled to work itself into the game. But that all changed early in the second half when the Swiss were awarded a penalty.

France goalkeeper Hugo Lloris, the team’s captain, saved Ricardo Rodríguez’s spot kick in the 55th minute and that seemed to wake up his teammates. Karim Benzema scored moments later in the 57th, and then again in the 59th to give France the quick-turnaround lead.

“We went through every emotion possible and honestly that was football the way we like it,” Lloris said. “The two goals we conceded in the last quarter of an hour really hurt us.”

Paul Pogba made it 3-1 in the 75th with a right-foot shot from 20 meters and it looked like the game was out of reach. But just as quickly as France had taken over the match, they let it go again.

Seferovic scored another header in the 81st minute and substitute Mario Gavranović made it 3-3 with only seconds remaining.

France had been trying to win back-to-back major titles for the second time. The French won the World Cup in 1998 and followed that up with the title at Euro 2000. Five years ago, France lost in the Euro 2016 final, but then won the 2018 World Cup.

Mbappé was only 19 when France won that title in Moscow, and he became youngest player since Pele in 1958 to score in a World Cup final.

The Brazilian great was quick to offer his support after the heart-breaking miss in Bucharest.

“Keep your head up, Kylian! Tomorrow is the first day of a new journey, @KMbappe,” the Brazil great wrote on Twitter.

France coach Didier Deschamps played on those winning teams more than 20 years ago, and was trying to become the first man to achieve the feat as both a player and a coach.

“It hurts but we have to accept it,” Deschamps said. “It’s football. Everyone is really disappointed. Everyone’s sad in the locker room. But the whole squad is still united in this difficult moment.”

Denial of responsibility! NewsConcerns is an automatic aggregator of the all world’s media. In each content, the hyperlink to the primary source is specified. All trademarks belong to their rightful owners, all materials to their authors. If you are the owner of the content and do not want us to publish your materials, please contact us by email – [email protected]. The content will be deleted within 24 hours.
EastEuropeFIFA World CupFranceFrance National Soccer TeamInternational soccerMen's soccerMen's sports
0
Share