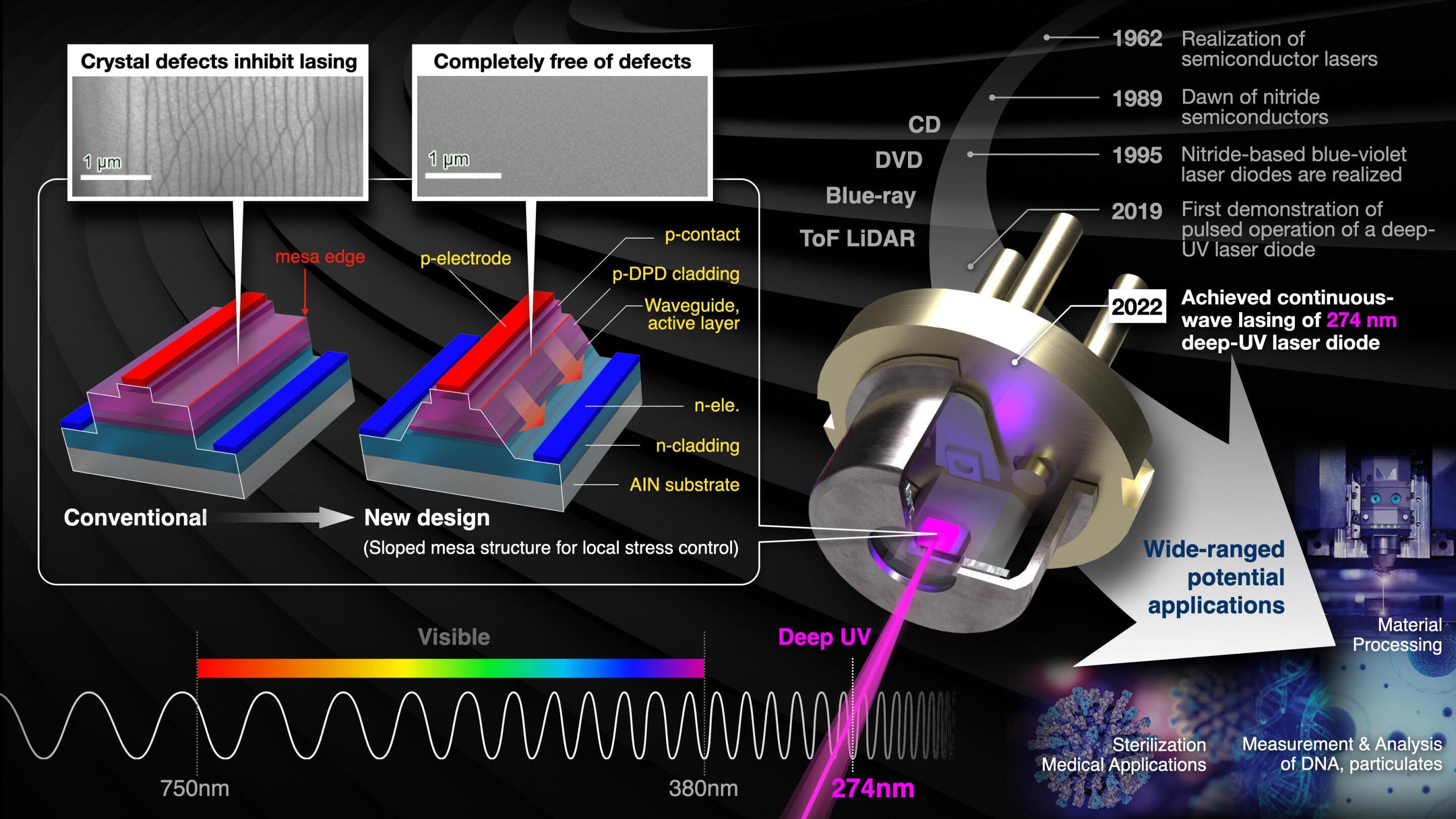 A research group led by 2014 Nobel laureate Hiroshi Amano at Nagoya University’s Institute of Materials and Systems for Sustainability (IMaSS) in central Japan, in collaboration with Asahi Kasei Corporation, has successfully conducted the world’s first room-temperature continuous-wave lasing of a deep-ultraviolet laser diode (wavelengths down to UV-C region).

These results, published in Applied Physics Letters, represent a step toward the widespread use of a technology with the potential for a wide range of applications, including sterilization and medicine.

Since they were introduced in the 1960s, and after decades of research and development, successful commercialization of laser diodes (LDs) was finally achieved for a number of applications with wavelengths ranging from infrared to blue-violet. Examples of this technology include optical communications devices with infrared LDs and Blu-ray discs using blue-violet LDs.

However, despite the efforts of research groups around the world, no one could develop deep ultraviolet LDs. A key breakthrough only occurred after 2007 with the emergence of technology to fabricate aluminum nitride (AlN) substrates, an ideal material for growing aluminum gallium nitride (AlGaN) film for UV light-emitting devices.

Starting in 2017, Professor Amano’s research group, in cooperation with Asahi Kasei, the company that provided 2-inch AlN substrates, began developing a deep-ultraviolet LD. At first, sufficient injection of current into the device was too difficult, preventing further development of UV-C laser diodes.

But in 2019, the research group successfully solved this problem using a polarization-induced doping technique. For the first time, they produced a short-wavelength ultraviolet-visible (UV-C) LD that operates with short pulses of current. However, the input power required for these current pulses was 5.2 W. This was too high for continuous-wave lasing because the power would cause the diode to quickly heat up and stop lasing.

But now, researchers from Nagoya University and Asahi Kasei have reshaped the structure of the device itself, reducing the drive power needed for the laser to operate at only 1.1W at room temperature. Earlier devices were found to require high levels of operating power because of the inability of effective current paths due to crystal defects that occur at the laser stripe. But in this study, the researchers found that the strong crystal strain creates these defects.

By clever tailoring of the side walls of the laser stripe, they suppressed the defects, achieving efficient current flow to the active region of the laser diode and reducing the operating power.

Nagoya University’s industry-academic cooperation platform, called the Center for Integrated Research of Future Electronics, Transformative Electronics Facilities (C-TEFs), made possible the development of the new UV laser technology. Under C-TEFs, researchers from partners such as Asahi Kasei share access to state-of-the-art facilities on the Nagoya University campus, providing them with the people and tools needed to build reproducible high-quality devices.

Zhang Ziyi, a representative of the research team, was in his second year at Asahi Kasei when he became involved in the project’s founding. “I wanted to do something new,” he said in an interview. “Back then everyone assumed that the deep ultraviolet laser diode was an impossibility, but Professor Amano told me, ‘We have made it to the blue laser, now is the time for ultraviolet’.”

This research is a milestone in the practical application and development of semiconductor lasers in all wavelength ranges. In the future, UV-C LDs could be applied to healthcare, virus detection, particulate measurement, gas analysis, and high-definition laser processing.

“Its application to sterilization technology could be groundbreaking,” Zhang said. “Unlike the current LED sterilization methods, which are time-inefficient, lasers can disinfect large areas in a short time and over long distances”. This technology could especially benefit surgeons and nurses who need sterilized operating rooms and tap water.

The successful results have been reported in two papers in Applied Physics Letters.