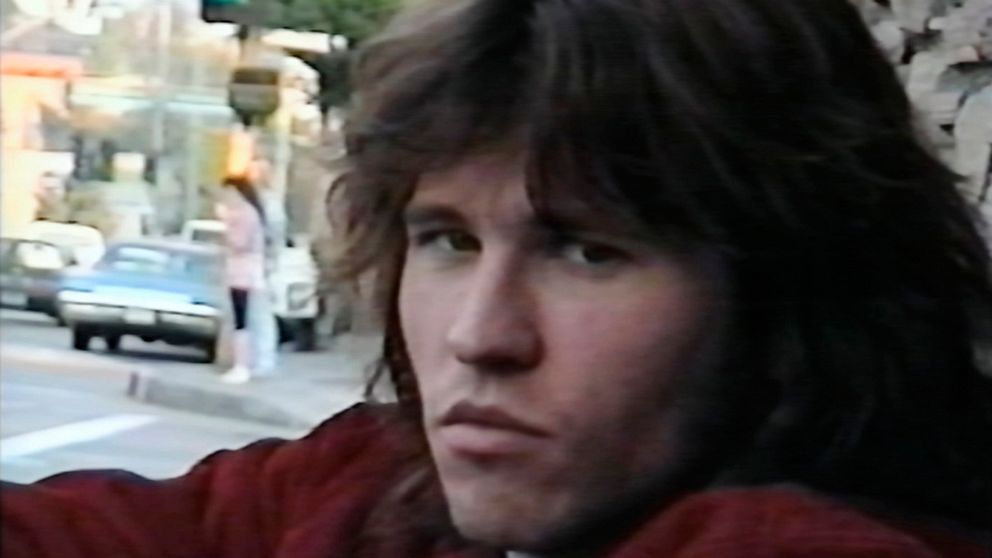 In his latest film, Val Kilmer gets an unusual screen credit for a bona fide Hollywood movie star: cinematographer.

That’s because the documentary “Val” is built on thousands of hours Kilmer filmed since he was a boy — growing up, on movie sets, in cars, in hospitals. This is a lifetime-in-the-making cinematographer’s credit.

Thanks to Kilmer’s relentless drive to document things, “Val” is a remarkably intimate film and a moving one, too. For a performer who has come off as chilly and difficult, this doc doesn’t counter those perceptions as much as explain them.

Actually, he leaves much of the talking to his son. The elder Kilmer’s voice has been impaired from throat cancer treatments and Jack Kilmer narrates the majority of the film using his father’s words, naturally while being filmed. “Now that it’s more difficult to speak, I want to tell my story more than ever,” says the elder Kilmer.

“Val” would not be the film it is if Kilmer hadn’t been an early adopter of hand-held video cameras, giving us home movies, audition tapes and live auditions. “I’ve kept everything,” he confides. His is a legitimate reason to be a hoarder.

The film lingers on each of those roles but perhaps the most intriguing parts are Kilmer’s earnest auditions for roles he never got. For “Full Metal Jacket,” he filmed himself using multiple voices to try to seduce director Stanley Kubrick and also made an audition video to play Henry Hill in “Goodfellas.” He got neither part.

Directors Ting Poo and Leo Scott have spun a mostly chronological profile, starting with Kilmer’s childhood and then giving us an unvarnished look at the star’s career, marriage and fatherhood, and ending it post-surgery as Kilmer struggles to be heard.

The filmmakers have a tendency to bring Kilmer to the scene of a favorite place — say, The Juilliard School in New York or a former family home — and then melt back in time by using the old movies. They’ll show images of Kilmer’s family hiking in the ’80s and then revisit the same area with the middle-aged Kilmer. Sometimes the images are forced, as when father and son dress up in cheap Batman and Robin costumes.

This is no glamour project. He and his estranged wife bicker over custody of their two children, he is shown laconically slapping bugs with a flyswatter poolside in middle age, and he looks fragile at a Comic-Con, puking at a signing station, a towel over his head as he’s rushed out in a wheelchair.

Kilmer — enigmatic to the rest of us — is portrayed as a quirky soul. He is shown shooting Silly String at his loved ones, sobbing as he puts on his late mother’s jewelry and pretending to pass out to freak out his son. He is much funnier than we expect and forces us to question why we thought him difficult at all.

In one of the rawest scenes, Kilmer attends a fan event for “Tombstone” signing photos and memorabilia. “I don’t look great and I’m selling basically my old self, my old career,” he says to the camera.

Tune in to see backstage video from “Slab Boys” on Broadway, with co-stars Kevin Bacon and Sean Penn slowly mooning the camera. He calls an early role in “Top Secret” just “fluff” and documents why “The Island of Dr. Moreau” was “doomed.” He’s such a Method actor that he constructed a backstory for the arrogant Iceman in “Top Gun.”

Kilmer is an intense actor, to be sure. When he played Doc Holliday in “Tombstone,” he filled his bed with ice for the final scene to mimic the feeling of dying from tuberculosis. To play Morrison, he wore leather pants all the time and blasted The Doors for a year, neither of which helped his marriage.

The film is bookended by tragedy. The weight of loss after Kilmer’s younger brother Wesley died accidentally at age 15 hangs over the actor and the documentary returns again and again to home movies the two made, heartbreakingly. And the loss of Kilmer’s voice means he must grapple with legacy and death in his 60s.

Even so, a relentless optimism comes through, especially his relationship with his adult children, who clearly adore their dad. “I’ve lived a magical life,” Kilmer concludes. It’s hard to argue back.

“Val,” a Amazon Studios release, is rated R for language. It hits theaters on Friday and is available on Prime Video on Aug. 6. Running time: 109 minutes. Three and a half stars out of four.

Mark Kennedy is at http://twitter.com/KennedyTwits

Denial of responsibility! NewsConcerns is an automatic aggregator of the all world’s media. In each content, the hyperlink to the primary source is specified. All trademarks belong to their rightful owners, all materials to their authors. If you are the owner of the content and do not want us to publish your materials, please contact us by email – admin@newsconcerns.com. The content will be deleted within 24 hours.
Arts and entertainmentDocumentariesEntertainmentJack KilmerKevin BaconMoviesOliver StoneSean Penn
0
Share

Have a Fun Weekend. | Cup of Jo