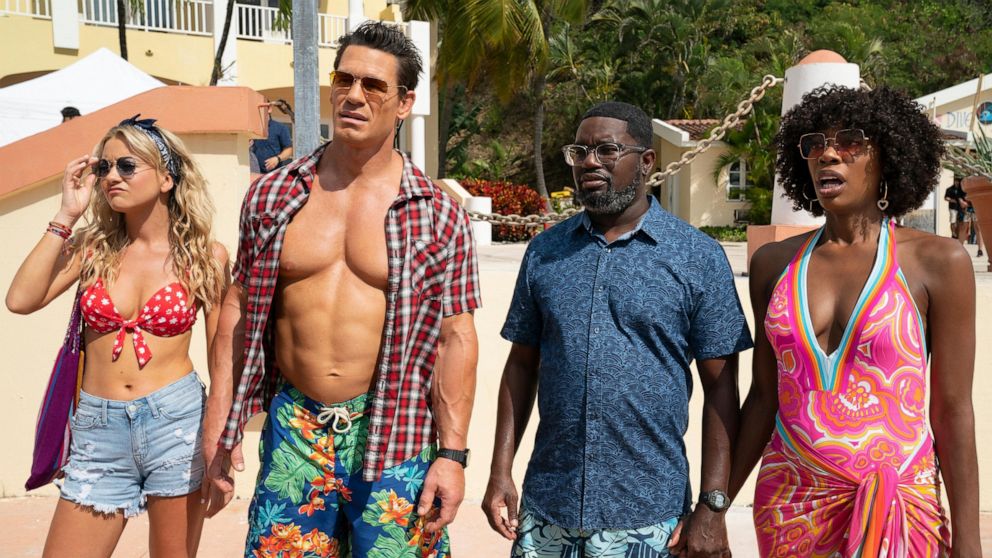 Lil Rel Howery, John Cena, Yvonne Orji and Meredith Hagner star in the new comedy “Vacation Buddies,” about a mismatched foursome who click on a trip and then are forced to confront one another back in the real world

The pandemic has been cruel to more than a few movie genres, but have any been so hampered by the current state of the world as the vacation comedy?

Early on, it reminded us of what we couldn’t do, what we were postponing or canceling. It was an odd experience of wistfulness laced with bitterness watching people like Steve Coogan and Rob Brydon dine and drink their way through Greece. Perhaps that’s why a comedy as absurdist and fanciful as “Barb and Star Go to Vista Del Mar” clicked with so many. It was just unreal enough to be palatable and silly enough to be cathartic. And then, of course, came “The White Lotus,” the dark comedy set at a ritzy Hawaiian resort that appealed on one level to some deep seeded superiority of not being “those people.”

It’s certainly not the fault of the movies and shows, most of which (with the notable exception of “The White Lotus”) were made or at least conceived of well before March 2020. Still, a genre that generally goes down easy became a bit hard to stomach.

The latest entry is “ Vacation Friends,” a long-gestating idea about a pair of mismatched couples who click on vacation that’s had everyone from Chris Pratt to Ice Cube in the lead. It finally started shooting, with Lil Rel Howery, John Cena, Yvonne Orji and Meredith Hagner now playing the foursome, in March 2020. Bad timing.

And yet, somehow out of the delays, the re-casting, the re-writes (Tom Mullen, Tim Mullen, Jonathan Goldstein, John Francis Daley and director Clay Tarver all have script credits), and the oddness of having to film in a pandemic, “Vacation Friends” came together to be a pretty fun time.

Howery plays Marcus, the straightlaced owner of a construction business who hopes to propose to his yuppie girlfriend Emily (Orji) on vacation in Mexico. Despite his meticulous planning, things go wrong from the start. But they get a lifeline when another couple, Ron (Cena) and Kyla (Hagner), invites them to crash in their presidential suite after being moved to tears by Marcus’ proposal.

Ron and Kyla are very extra. They are loud and a little obnoxious and make more than a few questionable decisions on behalf of their new friends, but it all comes from an undeniably good place. And they’re not rich either, as Emily assumes based on the ostentatious room. They spent every last dime on this vacation and are making the most of it.

It’s a classic comedy set-up and after a few protests from Marcus and Emily, soon they learn to embrace the Ron and Kyla way and live as drunken free spirits on vacation. Extending the bit even further, Marcus and Emily get a rude awakening when their vacation friends literally crash their fancy wedding weekend. All the leads are fully committed and it’s a great showcase for Cena’s wild abandon as well as Howery in a different type of role.

They’re surrounded by some delightful supporting performances too. The parents of the bride and groom are played by Robert Wisdom, Lynn Whitfield, Anna Maria Horsford and Chuck Cooper.

There’s nothing especially revelatory about “Vacation Friends.” There are a few genuinely good laughs to be had involving drugs, golf and a catamaran, both during the vacation and the wedding. And there’s some tedium during the inevitable falling out segment. But it’s enjoyable in a way that doesn’t make you think about lost time and experiences over the past year. Not to put too much significance on “Vacation Friends,” but perhaps it’s a sign that we’re ready to free lighthearted movies about chaotic vacations and destination weddings from the weight of the pandemic and just enjoy them.

“Vacation Friends,” a 20th Century Studios release on Hulu Friday, is rated R by the Motion Picture Association of America for “crude sexual references, language throughout and drug content.” Running time: 105 minutes. Two and a half stars out of four.

Denial of responsibility! NewsConcerns is an automatic aggregator of the all world’s media. In each content, the hyperlink to the primary source is specified. All trademarks belong to their rightful owners, all materials to their authors. If you are the owner of the content and do not want us to publish your materials, please contact us by email – admin@newsconcerns.com. The content will be deleted within 24 hours.
Arts and entertainmentchris prattChuck Coopercomedy moviesEntertainmentIce CubeJohn CenaJohn Francis Daley
0
Share

Consequences of the loss of threatened vertebrates