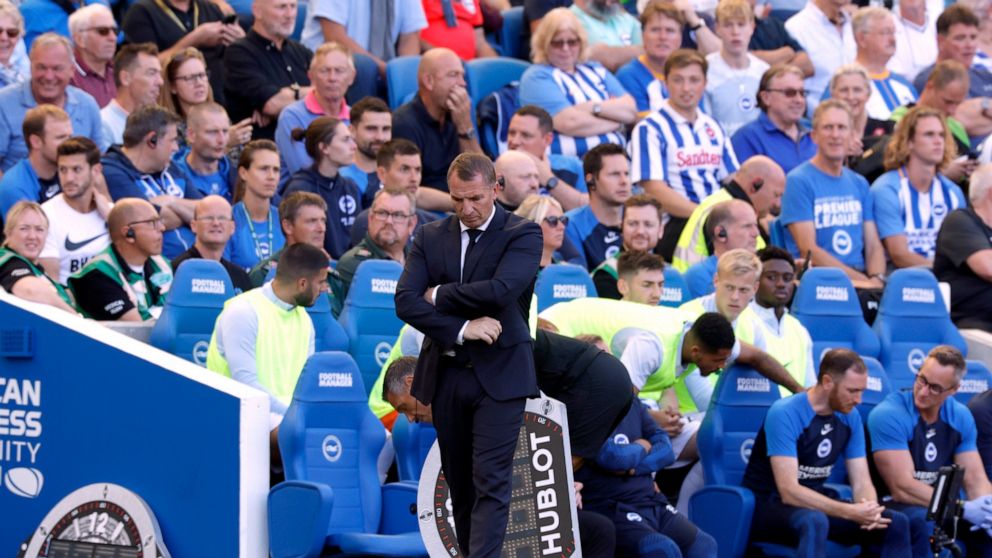 This season is already proving to be a big reality check for Leicester.

Six years ago, the club from the east Midlands was delivering soccer’s greatest fairytale, winning the English Premier League at preseason odds of 5,000-1.

Only last year, Leicester was winning the FA Cup for the first time and embarking on another season in Europe.

Last place in the league on just one point from six games. On a run of five straight losses. Seemingly out of money. And a coach publicly at odds with the club leadership.

“This isn’t the club that it was two years ago,” said Brendan Rodgers, Leicester’s beleaguered manager.

In a sense, Leicester is back to where it was eight years ago.

In 2014-15, the team spent almost the entire season battling relegation — the Foxes were bottom of the standings at Christmas, on just 10 points from 17 games — only to produce the greatest of great escapes and stay up after winning seven of its last nine games.

Claudio Ranieri was hired and the rest is history.

Is Rodgers the man to lead another revival?

Not the way he is talking.

After a recent loss to Manchester United, it felt like Rodgers was almost throwing in the towel, saying in a clear message to Leicester’s board: “With the greatest respect, we have not had the help in the market this team needed.”

Rodgers had a point. In a transfer window featuring record spending by England’s top-flight clubs totalling about $2.2 billion, Leicester actually made a profit of about $65 million. Its only signings were a third-choice goalkeeper on a free transfer and an unheralded defender, Wout Faes from French club Reims, for $17 million on the deadline day. Faes was essentially a replacement for Wesley Fofana, sold a couple of days earlier to Chelsea for around $80 million.

Leicester chairman Aiyawatt Srivaddhanaprabha explained that the board’s lack of activity in the transfer market was down to a need for “compliance with the game’s sustainability regulations” after an increase in net spend in recent seasons. There are also plans to expand King Power Stadium and the surrounding site.

“Building the club to a level where we are less reliant on player trading takes good management; strategic, sustainable investment; success on the pitch; and time,” Aiyawatt wrote in a letter to Leicester’s fans in a matchday program.

The big question is, will Rodgers be given time?

Leicester’s most recent match was a humiliating 5-2 loss at Brighton that prompted more questions about Rodgers’ future.

“I am not daft, I understand football,” said Rodgers, who insisted he would not be walking away.

And why would he, given he has a contract at Leicester until 2025 and would be entitled to a big payoff if he was fired.

Leicester, it appears, cannot afford to fire him so the situation is delicate heading into a trip to Tottenham on Saturday, one of seven matches taking place in the upcoming round of the Premier League. Three games are off because of logistical issues following the death of Queen Elizabeth II last week and the buildup to her funeral on Monday.

If Rodgers is to stay, he has to make Leicester harder to beat. The team has conceded 16 goals in six games — only Bournemouth has allowed more — with newly installed goalkeeper Danny Ward proving an ineffective shot-stopper and a huge downgrade from Kasper Schmeichel, who was Leicester’s captain and locker-room leader before opting to join Nice in the offseason.

Rodgers has dropped Wilfred Ndidi back into central defense, which has in turn weakened the midfield. Faes might be handed a debut against Tottenham, thereby restoring Ndidi into his rightful place.

Then there’s the question marks over Jamie Vardy, the only survivor from Leicester’s title-winning team. The striker recently signed a new deal through 2024, but is now 35 and has been ineffective this season.

Vardy was rested by Rodgers against Brighton and the two strikers who started, Kelechi Iheanacho and Patson Daka, both scored.

Most would say Leicester’s squad is too good to go down and there are good fixtures to come, with promoted teams Nottingham Forest and Bournemouth following Tottenham.

But there’s no doubt things have gone stale at the club and there has to be uncertainty over whether Rodgers has the desire to build another team, with Vardy and defensive lynchpin Jonny Evans in the twilight of their careers, Belgium midfielder Youri Tielemans in the last year of his contract, and star playmaker James Maddison likely wanting to play at a higher level in the next seasons.

That’s a big rebuilding job for Rodgers and there’s no money to underpin it.

Those league and cup titles suddenly seem a distant memory.

Denial of responsibility! NewsConcerns is an automatic aggregator of the all world’s media. In each content, the hyperlink to the primary source is specified. All trademarks belong to their rightful owners, all materials to their authors. If you are the owner of the content and do not want us to publish your materials, please contact us by email – admin@newsconcerns.com. The content will be deleted within 24 hours.
Athlete contractsBrendan RodgersDanny WardJames MaddisonJonny EvansKasper SchmeichelMen's soccerMen's sports
0
Share

Some Archaea found to have integrons, allowing cross-domain gene transfer

When Mark Cuban bought the Dallas Mavericks, he refused an office or big desk—here’s why