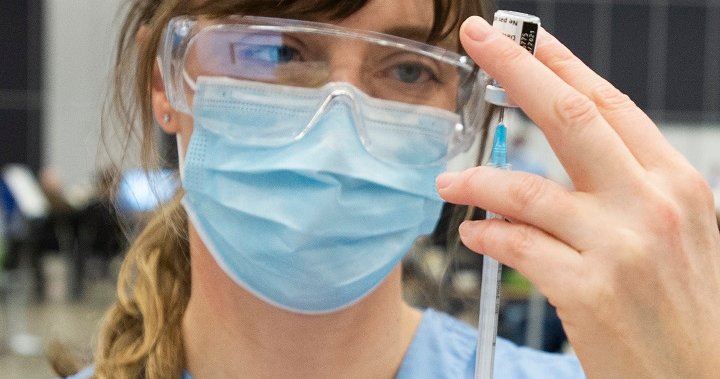 In a series of radio interviews, Legault said staff shortages could necessitate putting off the deadline again after an initial Oct. 15 date was pushed back by a month for the same reason.

The province had said workers not fully vaccinated by the October date would face suspension without pay, but Health Minister Christian Dubé backed down a few days before the deadline. He said the health system was facing the loss of about unvaccinated 22,000 workers, which would have put too much strain on an already taxed system.

The latest update suggests 19,634 workers in the health sector are still not fully vaccinated and 13,714 haven’t received a first dose.

Legault told Montreal’s 98.5 FM that compulsory vaccination could be imposed in certain fields rather than across the entire network.

Legault noted that only three per cent of nurses are unvaccinated but added that they are all needed, because the system is already short 4,000 nurses.

In numbers released last week, Dubé said 1,756 people had accepted the offer, including 58 nurses coming out of retirement. Of the rest, 351 were shifting from private agencies and 1,347 were part-time workers who switched to full time.

Meanwhile, Quebec reported 324 new COVID-19 cases on Monday and five more deaths attributed to the novel coronavirus. After six consecutive days of declining hospitalizations, the Health Department reported an increase in hospitalizations by nine patients to 259. There were 69 patients in intensive care, an increase of four.

The province administered 4,178 vaccine doses on Sunday, including 1,389 first doses. The province’s public health institute said 90.5 per cent of Quebecers aged 12 and older have received at least one dose of a vaccine, while 87.6 per cent are considered adequately vaccinated.

Denial of responsibility! NewsConcerns is an automatic aggregator of the all world’s media. In each content, the hyperlink to the primary source is specified. All trademarks belong to their rightful owners, all materials to their authors. If you are the owner of the content and do not want us to publish your materials, please contact us by email – [email protected]. The content will be deleted within 24 hours.
Canada CoronavirusCoronavirusCoronavirus In Canadacoronavirus newscoronavirus updateCOVIDcovid 19 canadaCOVID-19
0
Share

Whitegoods and electronics being sold from just $1 at online auction