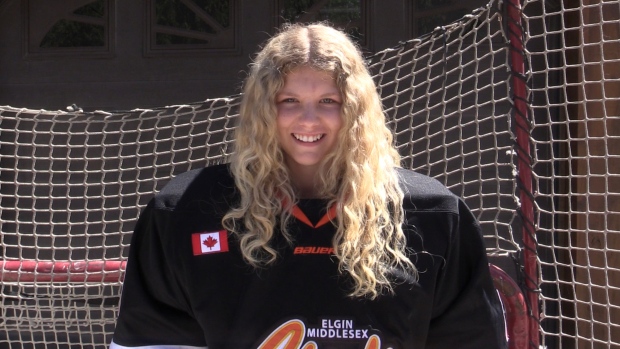 LONDON, ONT. —
Taya Currie made Ontario hockey history Saturday afternoon when she became the first female ever picked in the OHL Priority Selection.

The Sarnia Sting chose Currie with the 267th overall pick in the 14th round.

The Elgin-Middlesex Chiefs AAA goaltender was touted as one of the top keepers in Alliance Hockey.

“It was the athletic ability, great hands and the way she challenges the puck that drew us to her game,” Sting GM Dylan Seca told CTV news earlier this week.

Shannon Szabados, who played in the Western Hockey League, tweeted moments after the pick.

“Congrats Taya! Watched this live. Can’t wait to watch you on the world stage one day.”

Seca was excited at the thought of Currie breaking barriers in the league, but was also excited about her talent.

“I’m a father of two girls both who play girls’ hockey and I’ve coached both of them,” says Seca, who had discussions with his goalie coach this week about her size (5’7) and wasn’t worried that would be a hindrance in the OHL.

“I’ve always thought the day is coming when one of the girls is good enough to play in our league. Whether it’s this year or another year, I am excited that we’re even having the conversation.”

Currie has NCAA aspirations in the women’s game, but told CTV earlier this week she’d have to decide what her future holds if she got picked.

The new summer of love: ‘People are desperate to have sex – it’s been a long year’ | Sex