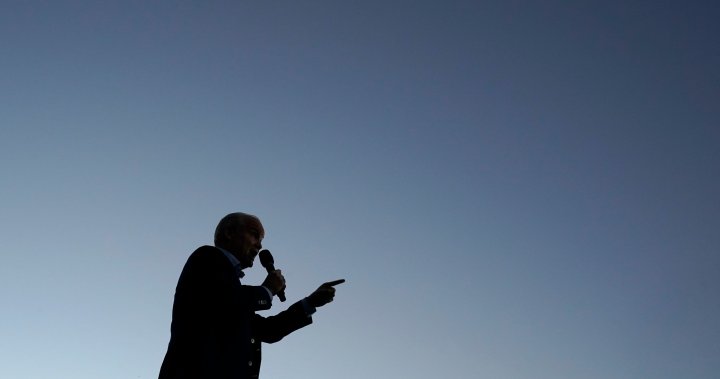 Conservative Leader Erin O’Toole delivered his starkest plea yet for people not to split the vote on the right by picking the People’s Party of Canada Sunday, on what was his last day before polls open.

Conservatives have been ramping up their warnings in recent days against voters going over to Maxime Bernier’s more populist party, in a campaign marked by a close race between the Tories and Liberals.

In polls and on the ground, the PPC, which finished a far from winning any seat in the 2019 election, appears to be gaining steam over its fiery opposition to mandatory vaccinations, provincial vaccine passports and Liberal Leader Justin Trudeau, in general.

The first two issues prove to be a delicate balance for the Conservatives, as the party believes in protecting personal freedoms, but also encourages people to get vaccinated.

A Leger poll released last week in collaboration with The Canadian Press showed the Liberals and Conservatives tied with the support of 32 per cent of decided voters, with the PPC at at five per cent.

O’Toole had been reluctant to say the party’s name and in earlier messages only cautioned voters against turning to “smaller parties,” saying he didn’t want to provide them with free advertising.

But that changed Sunday evening as he rallied supporters in Toronto after a day spent campaigning in the 905 region, one of his most critical paths to victory.

6:24
Election Day: What You Need to Know Before Heading to the Polls

Election Day: What You Need to Know Before Heading to the Polls

“Justin Trudeau wants you to split the vote by voting PPC,” he told the crowd of his last in-person rally.

Earlier on Sunday, he stopped in at different campaigns, urging volunteers to pound the pavement and get out the vote because results were going to come down to ground game.

“In this final stretch, talk to your neighbours, go to the Tim Hortons, talk to the person in line with you, distanced of course,” he told the crowd of about 30 supporters and volunteers in Oakville, Ont.

“Talk to everyone about our positive vision, Canada’s Recovery Plan. Canada’s Conservatives — we’re not your grandfather’s Conservative Party anymore. We’re reaching out to everyone, we’re a big, blue, positive tent that believes in this great country.”

O’Toole has campaigned in a style that is anything but normal, often trading face-to-face interactions with Canadians for a virtual format that relies on people picking up the phone and tuning into online townhalls.

It’s a strategy the party hopes delivers them new voters on Monday.

The same goes for his efforts to put a more moderate stamp on the party, which he says needs to grow if hopes to form government and in the past has done a lousy job of convincing people it stands for environmental protection and social issues, including LGBT rights and abortion services.

Even on his last full afternoon on the hustings, O’Toole chose to keep his events restricted to campaign spaces with a small group of volunteers, rather than open himself to inviting crowds of locals.

He made one of his last pitches for Canadians to vote Conservative in a Facebook video from the Toronto suburb of North York, asking residents not to reward Liberal Leader Justin Trudeau for plunging the country into an election during a fourth wave of the COVID-19 pandemic. He also released a mini television documentary the same day in hopes those who still don’t know who he is to find out.

O’Toole has refused to say whether he knows how many of his candidates are not double vaccinated, nor will he say if all new MPs would need to get both COVID-19 shots.

O’Toole ducked out without taking questions Sunday, but Kerry Colborne, who’s running against Liberal candidate and the minister responsible for vaccine procurement Anita Anand in Oakville, Ont., told reporters she is double-vaccinated and believes it’s important to be, but says she can’t speak for whether other candidates decide to say whether they are, too.

At another event, Joel Yakov Etienne, the party’s candidate for York Centre sported a Conservative Party button that said: “I am double vaxxed.”

“It speaks volumes for my current situation,” he said.

Questions about the vaccination status of Conservative candidates have followed O’Toole throughout the campaign, in part because he’s the only major party leader to not require full immunization. The stance reflects the party’s position to respect personal choice.

The Liberals have hammered on the issue in an effort to set themselves apart from the Conservatives. The frequent Liberal broadsides have led O’Toole to say the party leader is dividing Canadians, while Trudeau has countered by comparing O’Toole’s leadership to that of premiers in Western Canada, where COVID-19 cases have been spiking.

From Oakville, O’Toole travelled to Markham, Ont., where the party hopes to defeat Liberal candidate and trade minister Mary Ng. He brought a small group of volunteers coffee and doughnuts, and told them Conservatives will fight for more economic opportunities in the region.

The Conservative leader ignored a man holding a sign, who was protesting about the need for public health care to cover autism services.

O’Toole’s fate as party leader will be determined by the election outcome and members’ thoughts on his campaign. Former prime minister Stephen Harper stepped down after his election defeat in 2015, and Andrew Scheer resigned following the party’s 2019 loss, despite trying to hold on.

Asked whether he will stay on as party leader if Conservatives lose Monday’s vote, O’Toole simply said in French that “We will win.”

Denial of responsibility! NewsConcerns is an automatic aggregator of the all world’s media. In each content, the hyperlink to the primary source is specified. All trademarks belong to their rightful owners, all materials to their authors. If you are the owner of the content and do not want us to publish your materials, please contact us by email – admin@newsconcerns.com. The content will be deleted within 24 hours.
2021 canada electionCanadacanada electionconservative vote splittingErin O'TooleFederal ElectionMaxime Berniero'toole don't vote ppc
0
Share

‘And Just Like That’ Trailer Gives Clue About Carrie And Mr. Big’s Relationship