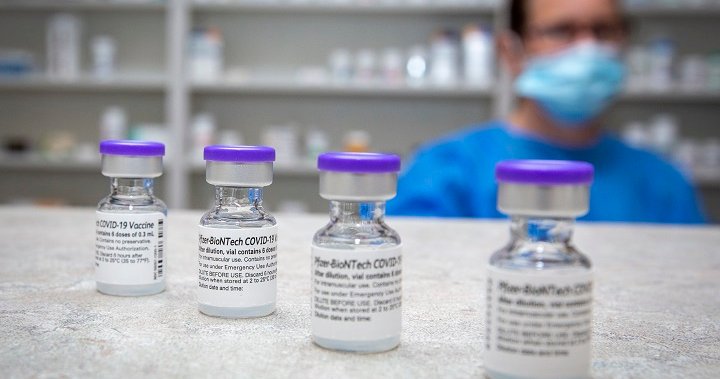 The Ontario government is issuing a preferential recommendation on Wednesday for those aged 18 to 24 to receive the Pfizer COVID-19 vaccine over Moderna due to a very low incidence of cardio issues in some younger people.

The recommendation was made based on the advice of Ontario’s Children COVID-19 Vaccine Table, Ontario Vaccine Clinical Advisory Group and Public Health Ontario.

“This is due to an observed increase in Ontario of the very rare heart condition called pericarditis/myocarditis following vaccination with Moderna compared to Pfizer in the 18 to 24 year old age group, particularly among males,” the government said on Wednesday.

In comparison, health officials said the risk was 1 in 28,000 after the second dose of Pfizer.

Health officials emphasized, however, that it is a rare event and the chance of getting COVID-19 is much more likely and the vaccine is the best defense against that.

The majority of the reported cases of the condition have been mild, “with individuals recovering quickly, normally with anti-inflammatory medication,” the government continued, adding symptoms typically began to appear a week after vaccination — more commonly after the second dose.

Symptoms can include chest pain, shortness of breath, irregular heart beat or palpitations or fatigue or general feeling of malaise or feeling unwell.

For those in the age cohort who received Moderna for their first dose, they can safely take Pfizer for their second dose. If an individual between 18 to 24 wants to still take Moderna, health officials said they can do so but with informed consent.

The province is currently only using Pfizer for those aged 12 to 17, despite Health Canada approving both Pfizer and Moderna.

Meanwhile, the province said earlier in the week it was preparing to vaccinate children aged 5 to 11. Health Canada still has yet to approve a vaccine for children of the age group, however, Pfizer began the process of seeking authorization for the cohort from U.S. officials.

Several public health units, including Toronto and Waterloo have said they are creating plans for when the approval comes through.

There are more than 10.5 million people fully immunized with two doses, which is 80.7 per cent of the eligible (12 and older) population. First dose coverage stands at 86.1 per cent.

Denial of responsibility! NewsConcerns is an automatic aggregator of the all world’s media. In each content, the hyperlink to the primary source is specified. All trademarks belong to their rightful owners, all materials to their authors. If you are the owner of the content and do not want us to publish your materials, please contact us by email – admin@newsconcerns.com. The content will be deleted within 24 hours.
CoronavirusCoronavirus Casescoronavirus newscoronavirus updateCOVIDCOVID-19covid-19 newsHealth
0
Share

The 2022 Jeep Grand Cherokee Gets A Hybrid Powertrain