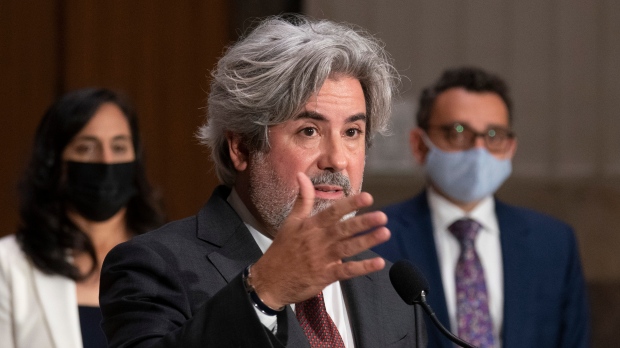 OTTAWA —
Returning to the job as Canada’s minister of heritage, Pablo Rodriguez is already facing questions about how he is going to stickhandle proposed sweeping new legislative and regulatory changes aimed at tamping down hate speech online, with the clock ticking on a self-imposed deadline and a barrage of stakeholders calling for the government to go back to the drawing board.

The proposed changes would force social media companies to be more accountable for, and transparent about, how they handle five kinds of harmful content on their platforms: hate speech, child exploitation, the sharing of non-consensual images, incitements to violence, and terrorism.

From accusations from the Official Opposition that the online harms bill will be “worse than Bill C-10” — the Liberals’ contentious changes to the Broadcasting Act aimed at web giants and regulating Canadian content — to stakeholders raising red flags about the consultation process undertaken this summer, the minister has a lot to contend with, and a short time to do so.

In the party’s campaign platform, the Liberals committed to bring forward the legislation “within its first 100 days,” stating that the changes “would make sure that social media platforms and other online services are held accountable for the content that they host.”

Asked on Tuesday after being sworn in as the Canadian heritage minister—a title he previously held between July 2018 and November 2019— Rodriguez was asked about the criticisms of the government’s proposal and whether he’s prepared to rework the approach before legislation is tabled.

“I’ll be consulting, that’s for sure,” he said.

WHAT THE LIBERALS PROPOSED

Two weeks before Prime Minister Justin Trudeau called the 2021 federal election, the government presented a “technical discussion paper” and rolled out a summer-long consultation process on a proposed legislative framework, promising that the responses received would inform the new laws and regulations.

Their proposal includes implementing a 24-hour takedown requirement for content deemed harmful, as well as creating federal powers to block online platforms that repeatedly refuse to take down harmful content.

In addition to new takedown and blocking powers, the proposal outlines potential new ways for CSIS and RCMP to play a role when it comes to combating online threats to national security and child exploitation content.

The sites may also be obliged, in certain circumstances, to preserve content and identifying information for potential future legal action. They could also have new options to alert authorities to potentially illegal content and content of national security concern if an imminent risk of harm is suspected.

The proposal would also compel platforms to provide data on their algorithms and other systems that scour for and flag potentially harmful content, provide a rationale for when action is taken on flagged posts, and would install a new system for Canadians to appeal platform’s decisions around content moderation.

The new regime comes with a series of proposed and severe new sanctions for companies deemed to be repeatedly non-compliant. These consequences would include fines of up to five per cent of the company’s annual global revenue or $25 million, whichever is higher.

In order to operate and adjudicate this new system, the government is looking to create a new “Digital Safety Commission of Canada” that would be able to issue binding decisions for platforms to remove harmful content, ordering them to remove content when they “get it wrong.”

When the summer consultation period ended on Sept. 25, stakeholders came forward with a range of concerns about the proposal, and the consultation process itself.

While the government has not made public the submissions received, Michael Geist, a University of Ottawa law professor and the Canada Research Chair in internet and e-commerce law, has posted a series of entries offered by a range of interest groups, including the Canadian Civil Liberties Association, Open Media, and the Canadian Coalition for the Rights of Children.

In his own submission, Geist highlighted several “serious concerns,” including that the proposed approach “does not strike an appropriate balance between addressing online harms and safeguarding freedom of expression,” and questioned why the range of harms from hate speech to child sexual exploitation material are being treated as equivalent rather than having nuanced applications for each issue.

As well, he questioned the government pointing to other country’s approaches like those in France, Germany, and Australia that have been met with similar pushback internationally, and said the investigative powers proposed are “enormously problematic.”

Authors of The Women’s Legal Education and Action Fund (LEAF) submission Moira Aikenhead, Suzie Dunn, and Rosel Kim wrote that while they would be supportive of a framework to address technology-facilitated gender based violence, but it cannot support this online harms proposal as drafted. That’s because, in their view, it “poses serious concerns from a substantive equality and human rights perspective and risks exacerbating existing inequalities.”

In its submission, Citizen Lab at the Munk School of Global Affairs also flagged a series of concerns, including with the proposal to grant CSIS new warranting power, saying the implications of this could be “extremely problematic.”

Ultimately, the group concluded the government needs to go back to the drawing board as the consultation was “massively inadequate.”

“I don’t think it’s possible within 100 days to achieve the kinds of objectives that the government seems to have set out for itself in these consultation documents,” said Lex Gill, one of the authors of the Citizen Lab submission in an interview with CTVNews.ca.

“An online harm is not a legal thing… That’s a concept that the government has come up with, to justify bundling all of these different issues together,” she said.

Gill said that if the government’s aim is to protect vulnerable groups online, the government’s proposals “radically fail to achieve that objective,” in part because the kind of algorithmic or machine-learning technology that is used to filter for harmful online content have been found to have disproportionate impacts on marginalized groups.

“We can’t have a meaningful, thoughtful, constructive public conversation when the thing that unites all of these different kinds of content is just the remedy of removal, and not the nature of the harm itself… Reasonable people are going to disagree from one type of content to the other,” Gill said.

She said that while it’s one thing to have advocates and “constitutional nerds” raising alarms: “If and when ordinary people in Canada become aware of the full scope of what the government is proposing… I think the government is going to really have a hard time holding position out as legitimate or democratically justifiable.”

Ahead of the swearing-in of the new cabinet, Department of Canadian Heritage spokesperson Daniel Savoie told CTVNews.ca in a statement that the department was “reviewing submissions” and that it will be “up to the government to determine next steps.”

WHAT HAPPENS TO BROADCASTING BILL?

Already the Official Opposition are laying the groundwork for a fight on this new bill, telling supporters recently in a fundraising email that the new “censorship bill is worse than Bill C-10.” They are framing the yet-to-be-tabled legislation as a “more extreme and far-reaching” attempt to “censor the internet and restrict your free speech.”

Throughout the legislative fight over the Broadcasting Act updates labelled in the last session as Bill C-10, the Liberals, and at times other parties, pushed back on the Conservatives’ framing of the bill as an issue of free speech as oversimplified and disingenuous.

Could Parliament be in for round two?

While the legislation stalled out in the Senate at the end of the last session, with Senators refusing to fast-track it given the concerns raised, the Liberal Party also promised in its platform to revive this bill within 100 days.

In the last Parliament the legislation faced considerable public backlash stemming in part from then-minister Steven Guilbeault’ s mixed messaging when it comes to regulating user-generated content. Should the Liberals re-table the bill, it’s possible it could come with amendments to address some of the lingering concerns.

As it was drafted, the government was seeking to make changes aimed at ensuring major social media platforms and streaming services such as Netflix, Instagram, TikTok, YouTube, and Spotify promote and pay their fair share towards Canadian artists and are held to similar standards as regular broadcasters.

Asked this week whether a re-work of C-10 is also on his agenda, Rodriguez said he’s looking into it but made no commitment one way or the other.

“We promised to bring some bills very quickly. C-10 is one of them. Why? Because it’s fundamental,” Rodriguez said, going on to speak about his past work on the file and in his view, good relations with stakeholders.

“I’m going to be consulting but the basis for the bill has to be to make sure that those web giants–they contribute to our culture like our own companies do and that’s fundamental—but at the same time, as I said before, freedom of speech is fundamental too.”

Denial of responsibility! NewsConcerns is an automatic aggregator of the all world’s media. In each content, the hyperlink to the primary source is specified. All trademarks belong to their rightful owners, all materials to their authors. If you are the owner of the content and do not want us to publish your materials, please contact us by email – admin@newsconcerns.com. The content will be deleted within 24 hours.
Don MartinEvan SolomonottawaPolitics
0
Share