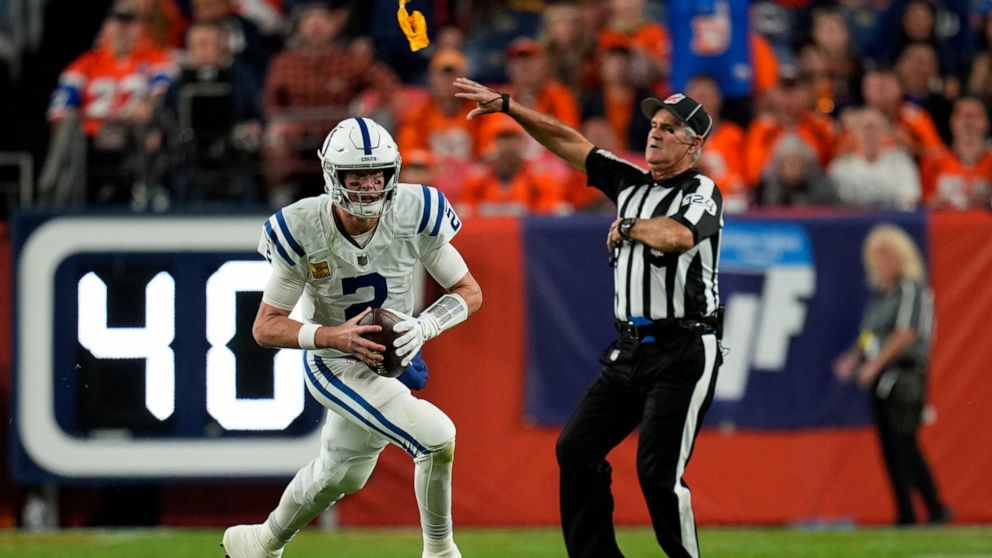 Last year, the Patriots, Steelers and Eagles rebounded from a 1-3 start to earn a postseason berth. The Chiefs and 49ers both opened 2-3 and still reached their conference championship games.

Odds are at least one of those nine teams will bounce back and get to the postseason.

The Indianapolis Colts took a first step, rallying to beat Denver in overtime Thursday night to even their record at 2-2-1. The AFC South is among four divisions with no club with a winning record.

“We’re not happy about 2-2-1, but we’re right there,” Colts coach Frank Reich said. “That’s what we’ve been saying. It’s a better start than some of the other years that we’ve had here. We’ve got to get better. … There’s a closeness to this team that I think is going to work well for us as we continue to go. We just need to continue to find ways to get better.”

The Colts started 1-5 in Reich’s first season as their coach in 2018. They ended up 10-6 and advanced to the divisional round of the playoffs. That was with Andrew Luck as their quarterback. They opened 1-4 last year with Carson Wentz and finished 9-8, missing the playoffs by one game.

Matt Ryan has struggled through the first five games with seven interceptions and 11 fumbles but he was clutch in the final two drives against Denver.

“I’m not going to flinch in those situations,” Ryan said. “I’m not going to get uptight. There is no reason to. You just keep on playing and you find a way. I have believed in that way throughout my career.”

Russell Wilson and the Broncos (2-3) have a long way to go to compete in the tough AFC West. They missed an opportunity to close out a win over the Colts when Wilson threw a pick late in the fourth quarter. Wilson then didn’t see an open receiver on a fourth-down pass in overtime that could’ve been a winning touchdown but instead fell incomplete.

Teams with losing records going into the weekend:

Raiders: (1-3): After winning 10 games and reaching the playoffs last season, the Raiders started 0-3 under new coach Josh McDaniels. They beat Denver for their first win but now face the Chiefs (3-1) on Monday night.

Steelers (1-3): The Steelers did it last year with Ben Roethlisberger, overcoming a 1-3 start to make the playoffs. Now, it’s on rookie QB Kenny Pickett.

Patriots (1-3): Like Pittsburgh last year, the Patriots also made the playoffs after opening 1-3. With a banged-up Mac Jones, it’ll be tougher to do the same this season.

Saints (1-3): The Saints have to stop turning the ball over, and they need Jameis Winston, Alvin Kamara and Michael Thomas healthy.

Panthers (1-3): Baker Mayfield isn’t doing anything to prove the Browns were wrong to dump him.

Lions (1-3): Jared Goff has led the league’s highest-scoring offense. But the problem is the defense is giving up even more points.

Texans (0-3-1): The Texans have had chances to win games but make too many mistakes and can’t finish.

Denial of responsibility! NewsConcerns is an automatic aggregator of the all world’s media. In each content, the hyperlink to the primary source is specified. All trademarks belong to their rightful owners, all materials to their authors. If you are the owner of the content and do not want us to publish your materials, please contact us by email – admin@newsconcerns.com. The content will be deleted within 24 hours.
Alvin KamaraAndrew LuckBaker MayfieldBen RoethlisbergerCarson WentzFootballFranJameis Winston
0
Share