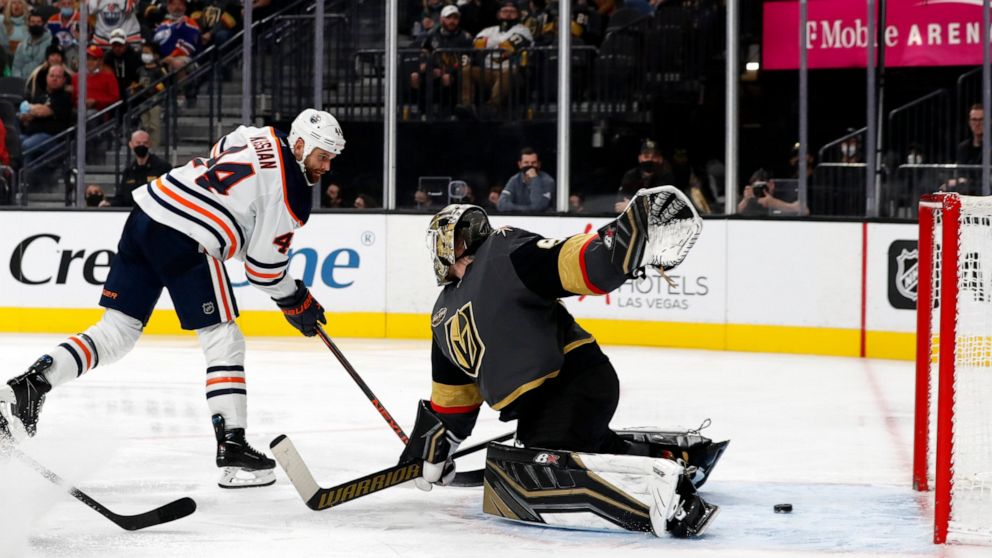 LAS VEGAS — The Edmonton Oilers are off to the second-best start in franchise history and don’t appear to be slowing down.

Zack Kassian scored a tiebreaking goal in the third period and the Oilers beat the Vegas Golden Knights 5-3 on Friday night.

Edmonton stretched its season-opening win streak to five games, tying the 1985-86 and 2019-20 teams. In 1983, the Oilers opened their campaign with seven straight wins.

“The work we’ve put in so far in training camp and the first four games, leading into a game against Vegas on a back-to-back — which you know their season hasn’t gone as much as they’ve liked so far, they were going to be hungry — it was going to be a real test for our team,” Edmonton coach Dave Tippett said. “They tested us hard. We bent a little bit, but didn’t break.”

Hardly, as the Oilers answered after trailing twice, and again when Vegas tied the game early in the third period.

Kassian took advantage of a turnover in the neutral zone and then froze Lehner in the crease before slipping the puck through the goalie’s pads to put Edmonton ahead to stay.

“We knew they were going to start hard, and that’s exactly what happened,” said Oilers goalie Mikko Koskinen, who made 36 saves. “They scored a goal early in every period. We couldn’t manage that the way we wanted, but we responded well and that’s all that matters in the end

Zach Hyman and Leon Draisaitl each scored twice for the Oilers.

Edmonton, which was playing the second of back-to-back games and for the third time in four nights, has outscored its opponents, 24-13. The Oilers’ plus-11 goal differential is tied with Florida for best in the league.

“Overall it’s been a fun 24 hours,” Koskinen said. “We got four points and showed a lot of character tonight. It wasn’t an easy game for us but we got a big win.”

It wasn’t as if the Golden Knights didn’t have ample opportunities, as they finished 0 for 3 on the power play, including a 5-on-3 early in the first period. Vegas is now 0 for 9 this season with a man advantage. Vegas is in an 0-for-26 power-play drought, dating to June 6, which was Game 4 of the second round of last year’s playoffs.

“We’re early in the season, we’ve got four of our power-play players on IR right now, so we’re working some guys in, in different units and different looks,” Vegas coach Peter DeBoer said. “It can be frustrating, but if you go down that road and jump on that train it’s a long season. We’ve got time here to get it right and get it figured out.”

Vegas, missing top-line forwards Mark Stone and Max Pacioretty, struck first when Roy got his stick on defenseman Zach Whitecloud’s shot from the point, redirecting it past Koskinen.

Edmonton tied it five minutes later on a power play when Connor McDavid took a pass, skated through the slot and drew Lehner out of the crease to his right. After McDavid tried shuffling the puck through heavy traffic, it deflected off Hyman’s right skate and just over the goal line to make it 1-1.

Patrick got his first goal as a Golden Knight when he redirected Dylan Coghlan’s shot from the blue line, putting Vegas back on top, but Hyman’s one-timer off a pass from McDavid tied the game again.

Moments later, Draisaitl notched his third goal of the season when he sent a pass from Ryan Nugent-Hopkins past Lehner, giving Edmonton its first lead of the game.

Hague tied the game for Vegas when his blast from the blue line got through traffic and past Koskinen into the lower corner.

NOTES: Top pair D Alec Martinez was scratched from the Golden Knights lineup with a lower-body injury. … Shortly before puck drop, per the NHL’s media site, the Golden Knights placed captain Mark Stone on injured reserve. … Referee Steve Kozari officiated his 1,000th career game and was presented with signed jerseys from both teams. … Edmonton D Kris Russell registered his 200th career assist with his helper on Draisaitl’s goal. … Whitecloud went to the locker room with what appeared to be an upper-body injury in the second period and didn’t return. DeBoer said Whitecloud is “going for evaluation, but that wasn’t good.”

Denial of responsibility! NewsConcerns is an automatic aggregator of the all world’s media. In each content, the hyperlink to the primary source is specified. All trademarks belong to their rightful owners, all materials to their authors. If you are the owner of the content and do not want us to publish your materials, please contact us by email – admin@newsconcerns.com. The content will be deleted within 24 hours.
Connor McDavidDylan CoHockeyLeon DraisaitlMark StoneMax PaciorettyMen's hockeyMen's sports
0
Share