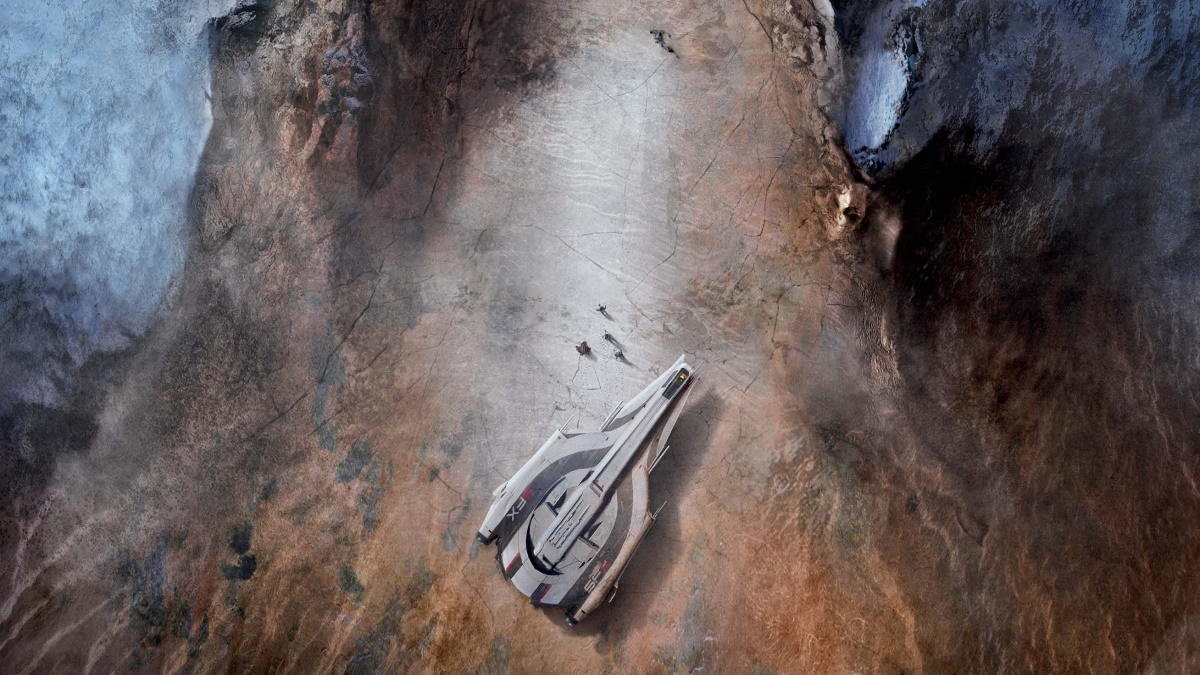 Developer BioWare has released a new poster for the next Mass Effect video game in celebration of N7 Day that teases a whole host of possibilities for the still-mysterious title. The company revealed in December of last year that it had already begun pre-production on the next Mass Effect title and released a brief teaser that seemed to indicate the return of some popular characters from the franchise’s original trilogy. The new poster is admittedly much lighter on explicit teases, but it does seem to imply the return of the Geth, an often-antagonistic species of robotic AI.

The poster essentially shows a group of space explorers heading for an impact crater of some sort. While it is difficult to make out details, it sure looks like there’s a Krogan among the group based on size and shape. But it’s really the impact crater that is notable here as the outline of it on the poster creates the impression of looking head-on at one of the Geth, complete with the horizontal line of light around its ocular interface. You can check out the poster for yourself below:

We have another #N7Day surprise for you from the team working on the next Mass Effect. ????

Thank you all for being the best fans in the world! pic.twitter.com/kUwASGJhcx

“Another team within BioWare has already begun pre-production on the next chapter in the Mass Effect universe,” BioWare stated alongside the release of the initial teaser late last year. “We’ve got a lot more in store for the Mass Effect universe and while we’ve got a long runway ahead of us before we’ll be ready to show you more, we hope the teaser set the tone for where we’re headed next. The teaser is full of hints about what we are planning, and we hope you have fun finding them all!”

As noted above, there is no telling when the new Mass Effect title will release or for what platforms. Or, for that matter, what its actual name even is. The most recent Mass Effect release was Mass Effect Legendary Edition, a compilation of the original Mass Effect trilogy for new consoles and PC, while the last truly new Mass Effect game was 2017’s Mass Effect: Andromeda. You can check out all of our previous coverage of the Mass Effect franchise right here.

What do you think of the new poster for the next Mass Effect video game? Are you excited to learn more about whatever BioWare has been cooking up? Let us know in the comments, or feel free to reach out and hit me up directly over on Twitter at @rollinbishop to talk about all things gaming!

Denial of responsibility! NewsConcerns is an automatic aggregator of the all world’s media. In each content, the hyperlink to the primary source is specified. All trademarks belong to their rightful owners, all materials to their authors. If you are the owner of the content and do not want us to publish your materials, please contact us by email – admin@newsconcerns.com. The content will be deleted within 24 hours.
BioWareElectronic ArtsgethkroganMass Effectmass effect 5mass effect postern7 day
0
Share

US Travel Rules: How US rules on international travel are changing

NHTSA Is Looking at 1.9 Million Ford Explorers for Windshield Trim That Comes Flying Off