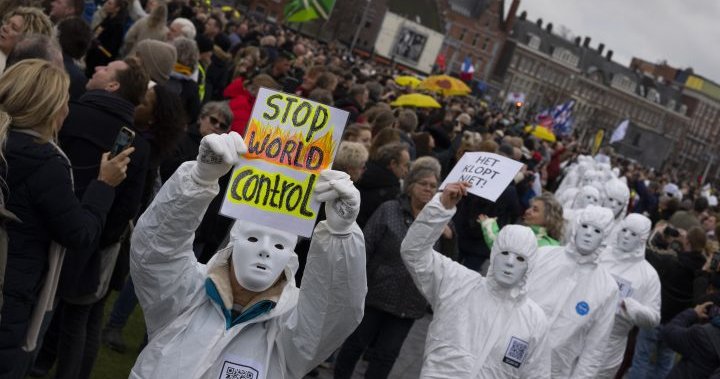 Thousands of people in the Netherlands defied a ban on assembling and demonstrated Sunday against the Dutch government’s coronavirus lockdown measures, gathering on a central square before marching toward a park in Amsterdam.

A small group of demonstrators briefly clashed with riot police as officers worked to clear the crowd from Museum Square based on an order from Amsterdam Mayor Femke Halsema. Reporters at the scene saw at least one person being detained.

The local government had outlawed the protest, saying police had indications some demonstrators might be planning to attend “prepared for violence.” The municipality later issued an emergency order for people to leave the square, and riot police marched across the grass to clear the area, sending the demonstrators into nearby streets.

Before officers moved in, some participants unfurled a banner that read, “Less repression, more care” near the Van Gogh Museum. A group of people in white overalls and white masks held up signs, including one that said: “It’s not about a virus, it’s about control” on one side and “Freedom” on the other. One person walked through the crowd carrying a “Trump 2024” flag.

There was a heavy police presence on the square and in nearby streets. The municipality designated the area as a security risk region, giving police the authority to frisk people preventatively.

After marching through the city, demonstrators began gathering at a western Amsterdam park for a rally of the populist Forum for Democracy party.

The demonstration came on the same day Dutch police said they would take action to protest the increasing demands of their work. Union representatives have said riot police would continue to work, if necessary.

Coronavirus infection rates have been gradually decreasing for weeks in the Netherlands, which re-introduced lockdown measures in November and tightened them further during the holiday season.

The 7-day rolling average of new daily cases edged slightly lower over the past week to 85.55 new cases per 100,000 people even as the omicron mutation became the nation’s dominant variant.

Under the lockdown, all non-essential shops are closed along with bars, restaurants and venues such as museums, theaters and cinemas.

In November, a coronavirus demonstration erupted into violent rioting in Rotterdam and demonstrations on Museum Square have ended in confrontations between police and protesters who ignored orders to leave the area.

Denial of responsibility! NewsConcerns is an automatic aggregator of the all world’s media. In each content, the hyperlink to the primary source is specified. All trademarks belong to their rightful owners, all materials to their authors. If you are the owner of the content and do not want us to publish your materials, please contact us by email – admin@newsconcerns.com. The content will be deleted within 24 hours.
AmsterdamCOVIDcovid-19 lockdownDutch COVID lockdownHealthNetherlandsNetherlands COVID updateNetherlands covid-19 lockdown
0
Share

Covid: Updates on cases, restrictions and testing today in UK

I Want What They Have: Megan Rapinoe and Sue Bird