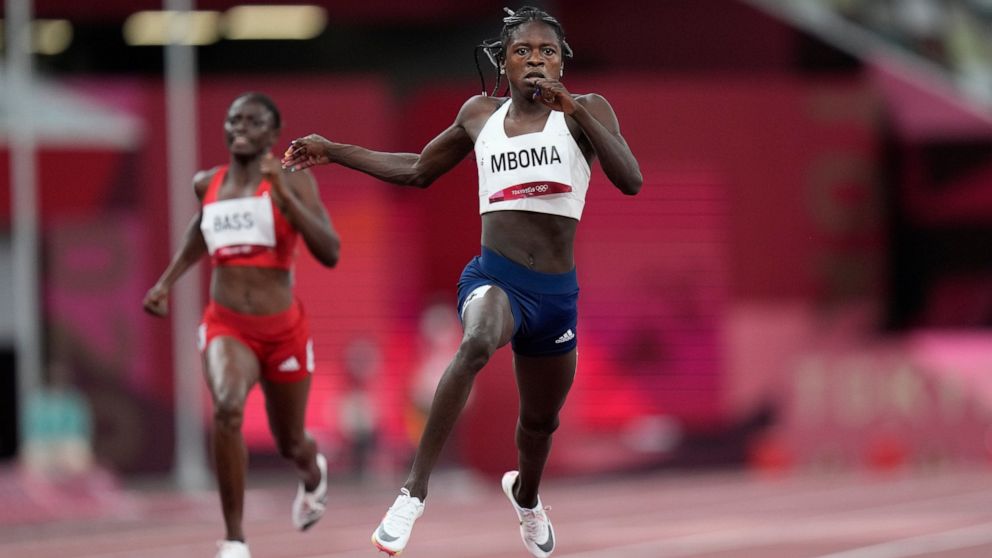 TOKYO — Two 18-year-old Namibian runners threw track and field’s contentious testosterone issue back into the Olympic spotlight Monday when they blazed into the women’s 200-meter final in Tokyo just weeks after being barred from the 400-meter race.

One of them, Christine Mboma, broke the world under-20 record twice in the space of about eight hours at the Olympic Stadium on the way to the 200 final.

She also charged past American Gabby Thomas, who earlier this year became the second-fastest woman ever in the 200, down the home stretch of their semifinal to finish second behind Elaine Thompson-Herah, the defending Olympic champion.

Mboma and teammate Beatrice Masilingi aren’t allowed to run in the 400 — their favored event — after tests ordered by the World Athletics found they had high natural testosterone. That meant they fell under the same regulations that have sidelined double Olympic champion Caster Semenya of South Africa in the 800 meters.

But the testosterone rules apply only to races between 400 and the mile, allowing Mboma and Masilingi a chance at the 200 in Tokyo.

“I’m happy with my time, breaking the junior record,” Mboma said. “I broke it in the morning and broke it here again. I’m really happy. It’s crazy.”

Asked about her ban from the 400, Mboma responded: “I have no comment for that.”

Relative unknowns on the international track circuit before this year, Mboma and Masilingi will now be part of a star-studded lineup in Tuesday’s final. It will include Thompson-Herah and another Jamaican, Shelly-Ann Fraser-Pryce, who are coming off a gold-silver finish in the 100 meters. Shaunae Miller-Uibo will be there, trying to add the 200 title to the 400 she won in Rio. And Thomas qualified too, though she had to wait for one of the wild-card spots after Mboma powered past her in their semi and put her back in third.

Mboma said she never expected to make that final.

“This is my first Olympics. I came here to get more experience,” she said. “I didn’t expect to run a good time or get a medal. I don’t know. I’ll see what I do. I just try my best. I just do my best.”

Masilingi qualified a few minutes before her teammate, making it through the first semifinal with a time of 22.40 seconds. Masilingi’s time was her second personal best of the day. She had already posted a PB of 22.63 seconds in the opening round.

“It was good, it was good. I’m happy. I’m through,” Masilingi said. “I felt that for me making it to the semifinals was the goal that I set. I crossed it and really happy with myself.”

The two Namibians announced themselves this season with some blistering fast times in the 400 meters, but those performances prompted World Athletics to order testosterone tests at their training base in Italy, the Namibian Olympic committee said. The tests revealed their natural testosterone levels were higher than a limit set by the sport’s world governing body, prompting their ban. The Namibian Olympic committee said the two runners were not aware they had high natural testosterone before the tests.

Athletes affected by the rules have an option to compete in restricted races if they lower their testosterone levels for at least six months before a competition. They have three options to do that: Taking a daily birth control pill, having hormone-blocking injections or having surgery.

The testosterone rules, which were introduced in 2018, affect female athletes with conditions referred to as differences of sex development, or DSDs. Those athletes have testosterone levels that are higher than the typical range for females, World Athletics said, and that are deemed to give them an unfair advantage over other female athletes.

One of the many criticisms of the rule is that they’re inconsistent because they only apply to certain races. World Athletics scientists have not been able to determine whether increased testosterone has a meaningful impact in distances outside the 400-meter to 1-mile range.

The issue was a major controversy at the 2016 Olympics in Rio de Janeiro, when all three medalists in the women’s 800 meters — Semenya, Francine Niyonsaba and Margaret Wambui — were later barred from that event because of high natural testosterone levels.

Denial of responsibility! NewsConcerns is an automatic aggregator of the all world’s media. In each content, the hyperlink to the primary source is specified. All trademarks belong to their rightful owners, all materials to their authors. If you are the owner of the content and do not want us to publish your materials, please contact us by email – admin@newsconcerns.com. The content will be deleted within 24 hours.
Caster SemenyaEast AElaine ThompsonFrancine NiyonsabaJamaica Olympic TeamjapanNamibia Olympic TeamOlympic games
0
Share

Iran Warns Against Any Action Over Deadly Tanker Attack

How to make up your mind when the glass seems half empty? — ScienceDaily