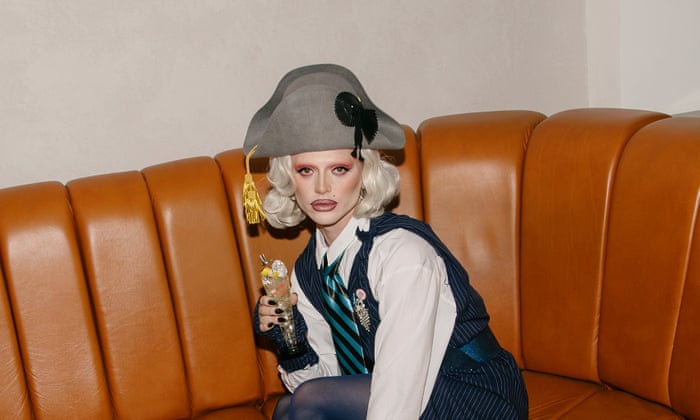 The most important lesson Bimini Bon Boulash has learned is that life is yours to define how you wish: “As long as you’re not hurting anyone, I think we should be able to exist as ourselves,” they tell me over the phone from their flat in London. “When it comes to how you want to be and how you want to express yourself, know that there are no rules. I feel like my personal style one day could be me getting vaccinated in a football kit and the next day I’m wearing Valentino. One day I’m relaxing with a cup of tea, the next I’m full glam with a martini cocktail in hand. There are no rules that I follow or boxes that I tick.”

Rejecting norms is fundamental to Bimini’s art, and since appearing on the second series of RuPaul’s Drag Race UK their non-conformist attitude has endeared them not just to queer people worldwide but to fans from all walks of life. In the UK, disrupting the “cis-tem” with a genderless approach to life and fashion, releasing a self-help book A Drag Queen’s Guide to Life, and advocating for the LGBTQ+ community – especially trans people – with true passion, has cemented their status as a queer national treasure.

It’s sometimes hard to believe, given their international success since being a finalist in Drag Race UK, that Bimini was initially underestimated in the competition. “I almost get off on that,” Bimini says. “I messed up during the first episode of Drag Race and in the second it didn’t go so great, either. But I worked my arse off to get to that final and I really proved people wrong.”

That they did: while their camp take on the Norwich City football kit during the first week’s challenge was a little rough around the edges, Bimini soon proved themselves as a singular artistic force, one whose left-field approach to creativity resulted in jaw-dropping moments, as demonstrated by their “prehistoric” amoeba look.

This sense of individuality is something that they have exhibited throughout their life. As a teenager growing up in Great Yarmouth, Norfolk, they started buying their clothes at charity shops, which is how they began to develop their own sense of style. “A lot of my outfits smelled because they had come straight from the charity shop,” they laugh, “but that’s when I realised that I didn’t have to conform to the high street any more.”

Bimini says their love of fashion comes from their mum, who “would always be dressed quite extravagantly and flamboyantly”, so much so that she picked up the nickname Eddie after Edina Monsoon from Absolutely Fabulous. Their mum owns a hair salon in Great Yarmouth, where Bimini would flip through magazines and admire the supermodels. They were obsessed with Vivienne Westwood’s playful yet socially conscious approach to fashion, and were drawn to the glamour of people like Kate Moss, who they used to emulate by wearing fishnet tights and fur coats, moth-eaten in their case; they even have the same anchor tattoo as Moss.

“There’s just something about Kate,” they gush. “I remember growing up and seeing everything that happened to her in the media. It just highlighted how toxic the media can be when bringing down strong women. But she was able to come back from that and she’s still thriving today and I’m hugely inspired by that. Everyone messes up and everyone can make mistakes, but I think Kate came back in such a powerful way.”

Bimini’s own approach to style developed when they moved to London at 18. Inspired by the buzzing party scene, and the flamboyance of many nightclubbers, as well as subcultures such as punk and new romantic, they experimented with their outfits and their gender presentation. “I think that’s why I was so drawn to Sink the Pink [the drag troupe and club collective], because they were the only ones who were doing anything on that level,” they say. “When we look back on this era, Sink the Pink are going to be one the most important subcultural groups for this trend – where people don’t care what anyone was wearing.”

During this time, Bimini had been flirting with drag, but it wasn’t until they returned to London after a brief period travelling in 2017 that they threw themselves into the artform, entering drag queen competitions such as The Glory’s Lipsync1000. More than anything, though, drag provided them space to play around with gender.

“People say that there isn’t a lot of difference between Tommy [their name out of drag] and Bimini, and I kind of agree,” they say. “Drag allows me to do what I felt like Tommy wasn’t able to do when it comes to gender. It’s about defying expectations of gender. I’ve been able to do that and, by playing around with the external, it’s really helped me know who I am internally.”

They cite their friends and collaborators, artist and designer Ella Lynch, makeup artist Byron London, and flatmate Barbs, for helping elevate Bimini Bon Boulash. Without them, Bimini would not be the fashion darling they have become since Drag Race, appearing everywhere from Italian Vogue to Interview magazine. They even walked in London fashion week for rising British designer Richard Quinn. “Kate Moss was sitting in the front row,” Bimini says. “I was shitting myself!”

For the most part, Bimini’s creative journey has taught them to reject conventions and labels. “My personal style is that I have no style because it’s always changing.” It’s the same with their approach to gender: “How I feel about my gender might change in five years’ time. I don’t have all the answers and I think that’s OK. For me, there is no end goal. The end goal doesn’t exist. I just want to keep growing and learning forever.”

Inspired by Bimini Bon Boulash’s out-there style, this long martini is all about subverting stereotypical ideas of the traditional martini cocktail. Long and light, it’s anything but stuffy – and is garnished with a kiss.

Add all the ingredients to a tall cocktail glass with ice.

Garnish with a lemon wedge, and serve.

For a drier option, replace ginger ale with soda.