Mrs Brown’s Boys: Why the feck is Brendan O’Carroll’s BBC comedy so popular? | The Independent 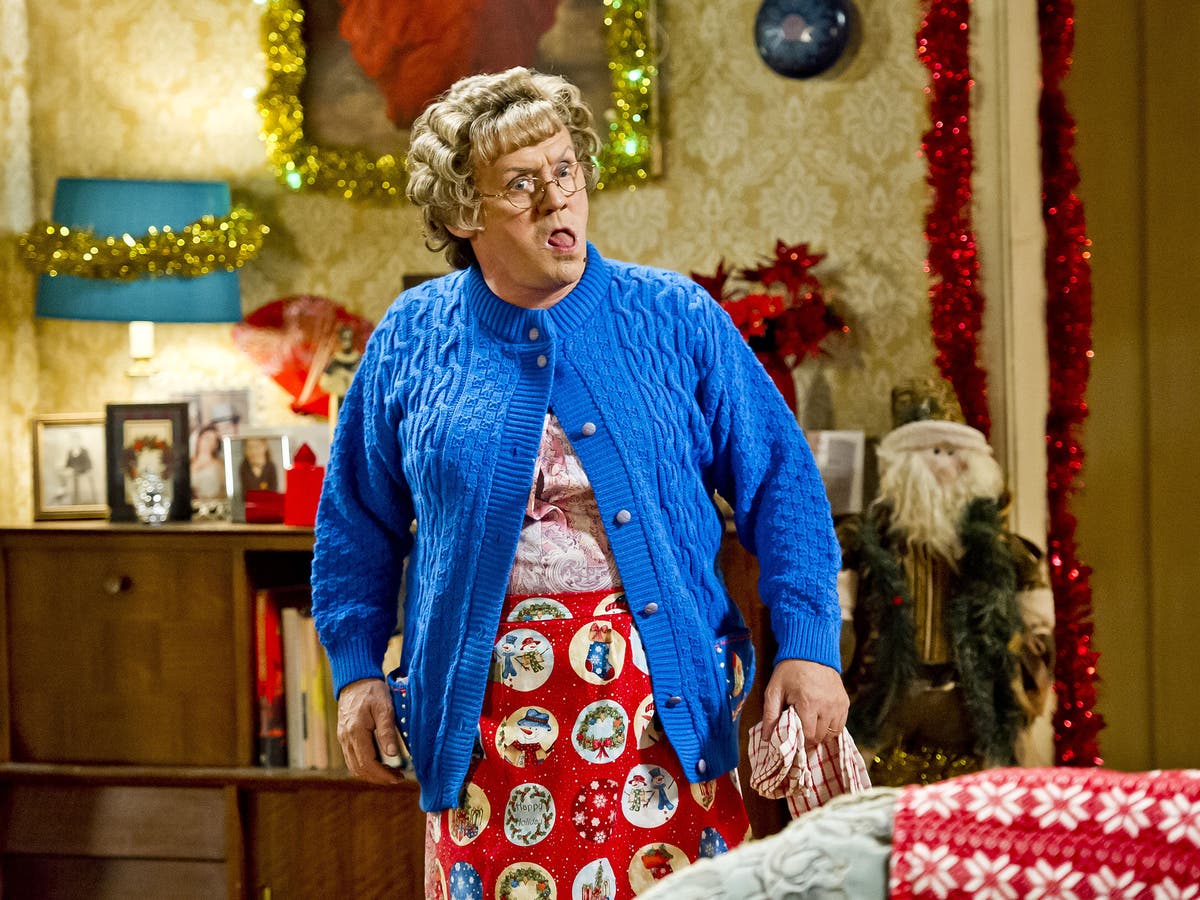 Four years ago, Mrs Brown’s Boys, the BBC sitcom described by one critic as “infantile, talent-deficient and entirely unfunny”, and another as “lazy, end-of-pier trash rooted in the 1970s”, was voted the best British sitcom of the 21st century in a public poll.

It’s hardly the first time there’s been a considerable gap in opinion between critics and viewers – think The Big Bang Theory, Citizen Khan or My Family – but when it comes to Brendan O’Carroll’s bulletproof slapstick comedy, whose double-bill Christmas special will air on Christmas Day and New Year’s Day, that gap is an unassailable gulf.

Based largely on O’Carroll’s mother, who raised 11 children on little income, Mrs Brown’s Boys stars the Irish comedian, in drag, as Agnes Brown – a bawdy, foul-mouthed Irish “mammy”. It’s set around the Brown family home and constantly breaks the fourth wall; not only does its matriarch speak directly to camera, but line flubbing, set breaking and retakes are left in for comedy value.

It’s the crude, sweary set pieces, though, that really have the studio audiences – and presumably the show’s millions of viewers – howling with laughter. In the pilot episode, 92-year-old granddad Brown falls ill. “I’m afraid I’ll have to do a rectal reading,” says the doctor. “Will you help, Mrs Brown?” “With feckin’ pleasure,” she says, gleefully slipping a washing up glove onto her hand. The audience roars. It is a strange, crass pantomime for grown-ups – so it’s no surprise that it was a stage show before it hit our screens.

O’Carroll, who left school at 11 and worked as a waiter, milkman and DJ before turning to standup comedy, first invented Mrs Brown as part of a radio soap opera. When the actress booked to play her fell ill, he took on the role himself, and never looked back. The show was an instant hit, but it wasn’t until O’Carroll lost millions of pounds – on a self-funded, never-released movie called Sparrow’s Trap – that he decided to earn some cash by bringing his alter ego to the stage.

In the audience one night was BBC producer Stephen McCrum. “It was very, very funny,” he told The Guardian in 2013. “I don’t believe in God, but I nearly did that night. The audience was full of 200 old women laughing, alongside ushers who were about 16 or 17 and also pissing themselves. It was immediately clear: there’s something happening here.”

Though many people surely wish McCrum had stayed home that night, his instinct was right. When Mrs Brown’s Boys premiered on BBC1 in 2011, critics suggested it might be axed before the end of the series. But by its third episode, 2.9 million viewers had tuned in. The Christmas special later that year was watched by 6.6 million people. Since then, its success has only escalated.

So what’s the secret to Mrs Brown’s Boys’ immunity to critical vituperation? “I don’t have a f***ing clue,” said O’Carroll in 2013 – but by the time the show was voted the best sitcom of the century by 14,000 Radio Times readers, he had a theory. “There is an audience out there that comedy forgot,” he said. “Somebody at the BBC read in a magazine that comedy is the new rock’n’roll, and they actually believed that, and started pitching it only to the 18 to 25-year-old market. That Are You Being Served? audience has been left behind. Us winning this award proves that.”

He had a point. The audience appreciation score for Mrs Brown’s Boys, according to former BBC Director Danny Cohen, “is the highest we’ve had in comedy for many, many years” – in large part because it tapped into an audience that had started to feel ignored. Post-2000, offbeat series like The Thick of It, The Office, Green Wing, Spaced and Peep Show began to dominate. Of the few mainstream sitcoms that made it through, most of them – Outnumbered, Miranda, My Family – revolved around decidedly middle class, usually London-based characters.

Mrs Brown’s Boys is a show about a working-class Irish family. In one episode a few years ago, Mrs Brown realised her new virtual assistant Maggie, an Alexa-type contraption shaped like a shamrock, was stuck on the “posh setting”. When she switched the setting, Maggie’s polite English accent transformed to an Irish one devoid of airs and graces.

That the show is created by, and stars, an actual working-class family lends an important air of authenticity to a knowingly artificial show. Family friend and fan favourite Buster is played by O’Carroll’s real-life son Danny; Mrs Brown’s daughter Cathy is played by O’Carroll’s wife Jennifer Gibney, and her best friend Winnie is played by his sister, Eilish. At a preview screening of 2019’s Christmas episodes, O’Carroll revealed that almost every cast member had, at some point, also worked behind the scenes. “It’s important for us that everyone who stands on stage,” he said, “understands what it takes to be behind it.”

He also recalled defending the show’s frequent cursing to a “very Etonian” person at the BBC, who claimed he couldn’t be a big star if he didn’t tone down the frequent “fecks”. “First of all, I don’t wanna be a big star,” he told them. “Secondly, the show is the show.” Gibney agreed. “In Ireland, if someone says f***, or feck, it’s a comma, or a question mark. It’s the way we speak.”

According to a YouGov poll, although the show’s fans are split fairly evenly between the classes, its detractors are overwhelmingly middle class. Intriguingly, 62 per cent of its fans also voted for Brexit. In a world which many see as elitist pro-Remainers pitted against working-class Brexiteers keen to regain national sovereignty, it’s tempting to conclude that everyone who holds Mrs Brown’s Boys close to their heart falls into the latter camp.

Labour MP Stella Creasy seemed to back this idea in a blog post for The Huffington Post, in which she cited the Mrs Brown’s Boys debate as evidence of a growing split between the public and the elite. “This fatal flaw in our collective identity has made us presume we know what other people want and need,” she wrote. But perhaps this reading of the situation calls for a little more nuance. The fact that the middle classes are just as likely to tune in, but less likely to admit it in public, probably says much more about virtue-signalling as middle-class cultural currency than it does about working-class insularity.

It’s not just that. John Fagan, the director of Media Production at Dublin’s Liberties College, believes the show, given the comic randiness of its protagonist, “gives vent to normally unacknowledged desires” – widows and older women wanting sex. “Traditional sitcoms of the Seventies and Eighties,” he says, “saw female desire as essentially voracious and unsettling; presenting as either the busty blonde male fantasy (Barbara Windsor in any Carry On film) or as unattractive post-sexual spinsters or frustrated married women (Al Bundy’s wife Peg in US sitcom Married with Children). Mrs Brown’s Boys, however, reclaims female desire from this most un-PC of comic DNA, giving a joyous voice to middle-aged women.”

Whatever the reason for its success, Mrs Brown’s Boys shows no signs of slowing down. “I trained from 14 to 17 to wait tables,” said O’Carroll. “Every day I wake up, I’m pretty glad of my second chance.”