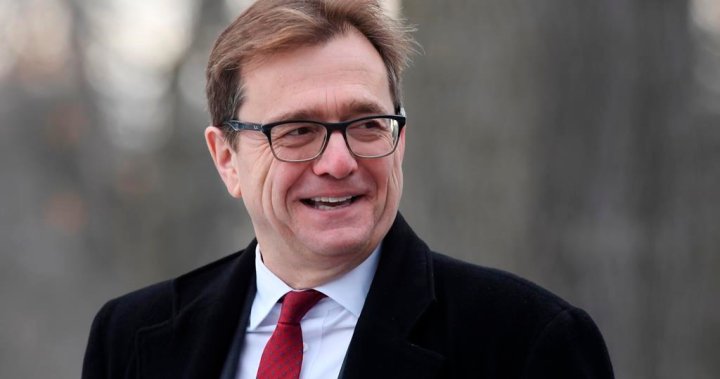 Canada’s environment minister says he’s “cautiously optimistic” that he, and his German counterpart, will be able to convince enough countries to help fund a $100-billion climate change pledge ahead of the rapidly approaching U.N. climate talks in Scotland next month.

Speaking with The West Block’s Mercedes Stephenson, Jonathan Wilkinson said that the fund, which is specifically earmarked to help developing countries fight climate change, was a “critical piece” in the Paris Accords’ architecture.

Read more:
Climate change might be spiraling out of control. What does that mean for Canada?

According to Wilkinson, both Canada and Germany agreed to help corral the money in advance of the 2021 United Nations climate conference, also known as COP26, after funding for the program had slowed.

“We have been spending a lot of time over the last couple of months doing that, and certainly the last couple of days were meeting with a lot of countries to twist their arms about being more ambitious with respect to climate finance,” said Wilkinson, who at the time had spent several days in Milan for the conference’s final set-up in agenda.

“I would say that I am cautiously optimistic that we are going to be able to deliver on that when we get to COP. But of course, there’s still a bit more work for us to do over the coming days.”

On Friday, Wilkinson said that both Canada and Germany were making “a lot of progress” in their efforts and that he had spent the last two days in Milan in a series of bilateral meetings with some of the world’s most powerful and richest countries.

More than 10 years ago, those same nations had collectively agreed to raise $100-billion in climate financing a year by 2020 in order to help fund the developing worlds’ efforts to adapt and mitigate against climate change.

Read more:
‘Climate migrants’: Report warns 200 million could be pushed out of homes by 2050

Last month, the OECD revealed that those developed countries were US$20 billion short of that $100-billion goal — and with those wealthy nations producing a majority of the emissions responsible for destabilizing the planet’s climate and warming it at an increasingly rapid rate — Wilkinson and Germany’s environment state secretary Jochen Flasbarth both agreed to help get them to cough up the cash.

“I would say that we have made a lot of progress and certainly Germany and Canada are working very hard to ensure that we can and we will deliver on the $100-billion commitment,” said Wilkinson on Friday during a telephone news conference from Milan.

While he confirmed that no new promises of the cash had been announced by other countries yet, he said that he was given assurances by a number of them about incoming funding commitments.

Luckily for Wilkinson and Flasbarth, some of that gap had been bridged before taking up their efforts in July to round up the money in July.

Canada promised to double its funding to $1 billion a year over the next five years and Germany committed to at least US$7 billion by 2025.

2:15
“Eyes of the world” will be on Scotland for climate summit, Queen Elizabeth says

“Eyes of the world” will be on Scotland for climate summit, Queen Elizabeth says

Biden however said he’d double the U.S. contribution to the fund by 2024, earning praise from Wilkinson who added that the financial commitment was “critical” for them to hit that $100-billion goal.

A report documenting what has been promised so far and how Wilkinson and Flasbarth intended to get the rest is expected to be published later in October.

“But at the end of the day, we are facing an existential threat,” said Wilkinson.

“It’s not a question of whether we reduce greenhouse gas emissions. It’s about how we do it.”

Denial of responsibility! NewsConcerns is an automatic aggregator of the all world’s media. In each content, the hyperlink to the primary source is specified. All trademarks belong to their rightful owners, all materials to their authors. If you are the owner of the content and do not want us to publish your materials, please contact us by email – admin@newsconcerns.com. The content will be deleted within 24 hours.
CanadaClimateclimate changeClimate Change CanadaClimate change conferenceClimate Crisisclimate talkscop26
0
Share

Plane crashes into office building in Milan, killing all eight onboard