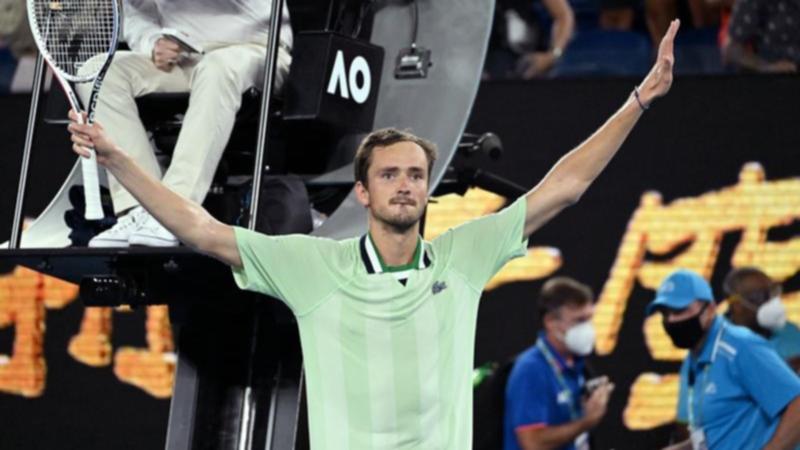 Daniil Medvedev’s bid for a second grand slam title is alive after he saved a match point and became the first player to win a match from two sets down at this year’s Australian Open.

The Russian star saved his match point in the fourth set to push the match into a decider, eventually overcoming the ninth seed in a marathon four hours and 42 minutes.

It was sweet relief for the 25-year-old, who assumed clear favouritism for the Open when nine-time winner Novak Djokovic was deported to Serbia on the eve of the tournament.

Medvedev moves into the semi-finals at Melbourne Park for the second-straight year after losing to Djokovic in the 2021 decider.

“I was not playing my best and Felix was playing unbelievable,” Medvedev said.

“He was all over me.

“I did not really know what to do so I was like…what Novak would do?

“You know that came to my mind because he is one of the greatest…and has won so many matches like this.”

But Medvedev will have to defy recent history to go all the way, with no men’s player having won the Australian Open after saving a match point since Marat Safin in 2005.

Medvedev broke through for his maiden grand slam title win when he upset Djokovic at last year’s US Open.

Auger-Aliassime, the world No.9, will be shattered with the result, but is a clear star of the future, aged just 21.

The athletic right-hander has reached at least the quarter-final stage of the last three majors dating back to Wimbledon.

Medvedev will face-off against Stefanos Tsitsipas in the semis at the Open for the second-straight year after the Greek star demolished young Italian sensation Jannik Sinner 6-3 6-4 6-2.

After looking shaky in his fourth-round match against Taylor Fritz, when the American pushed him to five sets, Tsitsipas looked at home on Wednesday.

The world No.4 needed a little more than two hours to overcome Sinner.

It was a major warning shot to the rest of the Open field, as Tsitsipas appears to be peaking at the right end of the tournament.

After undergoing elbow surgery in November, Tsitsipas was unsure if he would even play in Melbourne, but is now within reach of a breakthrough major title.

“My doctor didn’t expect for me to participate at the Australian Open. It was not part of our plan to be playing in Australia, but I’ve proved him wrong,” Tsitsipas said.

Spanish legend Rafael Nadal is up in the other semi-final against Italian seventh seed Matteo Berrettini on Friday.

Denial of responsibility! NewsConcerns is an automatic aggregator of the all world’s media. In each content, the hyperlink to the primary source is specified. All trademarks belong to their rightful owners, all materials to their authors. If you are the owner of the content and do not want us to publish your materials, please contact us by email – [email protected]. The content will be deleted within 24 hours.
SportTennis
0
Share

Catalonia expected to pardon up to 1,000 people accused of witchcraft | Catalonia