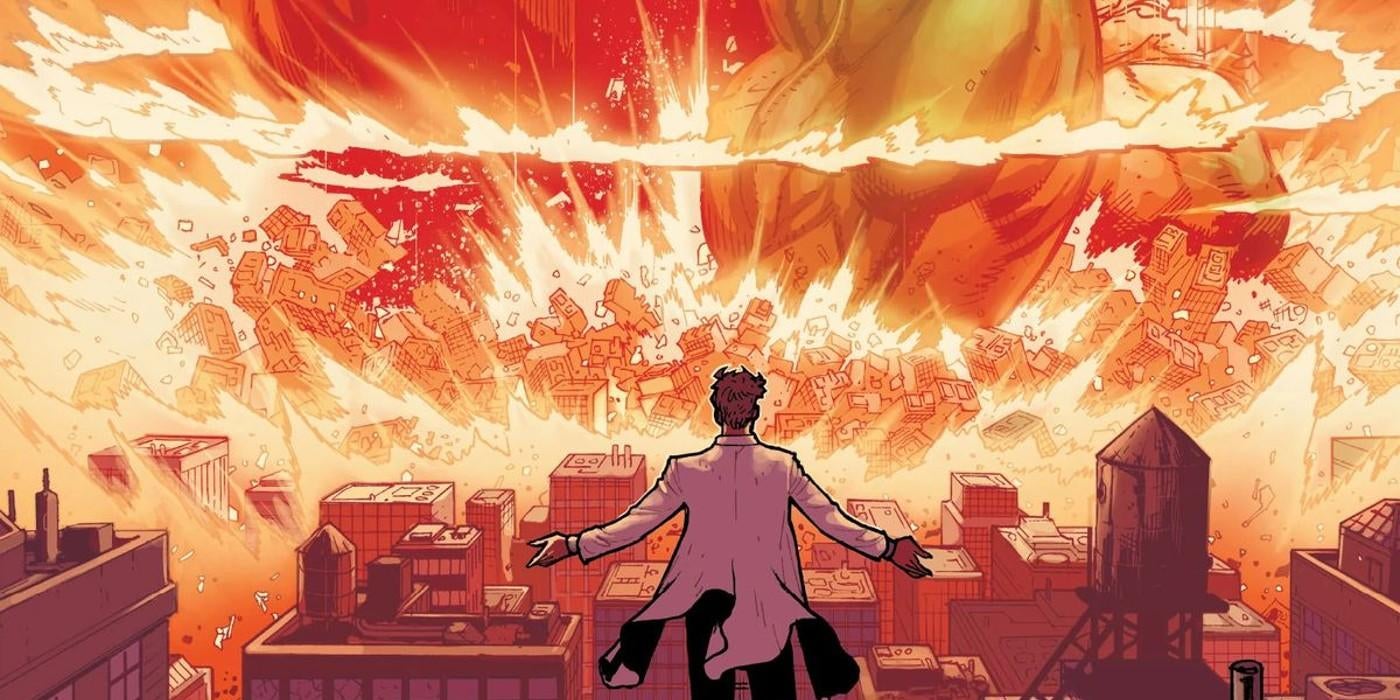 Bruce Banner has found himself at odds with many of his allies in the Marvel Universe at various points in his life. The newest volume of Hulk by writer Donny Cates and artist Ryan Ottley looks to make another change to the Bruce Banner/Hulk dynamic by positioning Bruce farther away from a clear-cut hero; though if you were to ask Bruce, he would still see himself as the hero in his own twisted story. Of course, the way Bruce behaves in Hulk #1, it would appear that he really doesn’t care what anyone else thinks of his actions and motivations.

WARNING: Spoilers for Hulk #1 below. If you were a reader of Al Ewing and Joe Bennett’s Immortal Hulk, then this new iteration of the title will come across as a drastic departure. The horror themes have been replaced with sci-fi bombastic flare, and it’s all due to Bruce Banner’s machinations. An unspecified event in El Paso, TX sends Bruce on the run, and he’s taken control of his gamma-powered alter ego in the most unexpected way possible. Bruce has caged the Hulk’s rage from the inside and is using it as an engine to power what Cates refers to as “Starship Hulk.” Bruce sits at the command center of this techno-Hulk, overpowering Tony Stark in one of his classic Hulkbuster armors.

The Avengers, Spider-Man, Doctor Strange, and the Fantastic Four are gathered together to discuss their latest Hulk problem. As Doctor Strange explains, the events in El Paso have broken Bruce’s mind. He’s attempting to run away from his problems, and part of that running involves using Iron Man’s Celestial ark to teleport to a pocket dimension, never to be bothered or hunted again. The rage-fueled Starship Hulk makes easy work of the Hulkbuster, enters the wormhole, and disappears. Bruce leaves behind a message warning that his friends aren’t dealing with the Hulk anymore… they’re dealing with Bruce Banner.

Cates addressed Bruce Banner’s hero status in an interview with ComicBook.com, stating that he doesn’t see the character as an antagonist. “No, I don’t. I don’t see him like that at all. I think that he’s a deeply troubled and flawed man, just like all of us,” Cate explained. “And he’s at a point in his life where he’s trying to regain some control and some autonomy, and sometimes that can be very self destructive. And so, I think that the only victim right now is himself. And you see that with the vision of Betty who’s acting as his subconscious moral center. Obviously, she’s not real, right? But if you look at her actually, Ryan Ottley put her in her exact outfit that she looks like in her first appearance. Because that’s how Bruce sees her in his mind as this girl that he hasn’t ruined her life yet.”

Bruce Banner finds himself more as an antihero now than a full-fledged villain. Even though it seems he cost some people their lives in El Paso, he’s not plotting on world domination or anything of that nature. Of course, readers will have to stay tuned to see that this doesn’t change as Hulk continues.

What did you think of Cates and Ottley’s Hulk, and their take on Bruce Banner? Let us know down in the comments.

Denial of responsibility! NewsConcerns is an automatic aggregator of the all world’s media. In each content, the hyperlink to the primary source is specified. All trademarks belong to their rightful owners, all materials to their authors. If you are the owner of the content and do not want us to publish your materials, please contact us by email – [email protected]. The content will be deleted within 24 hours.
Bruce Banner / HulkDonny CatesHulkRyan Ottley
0
Share