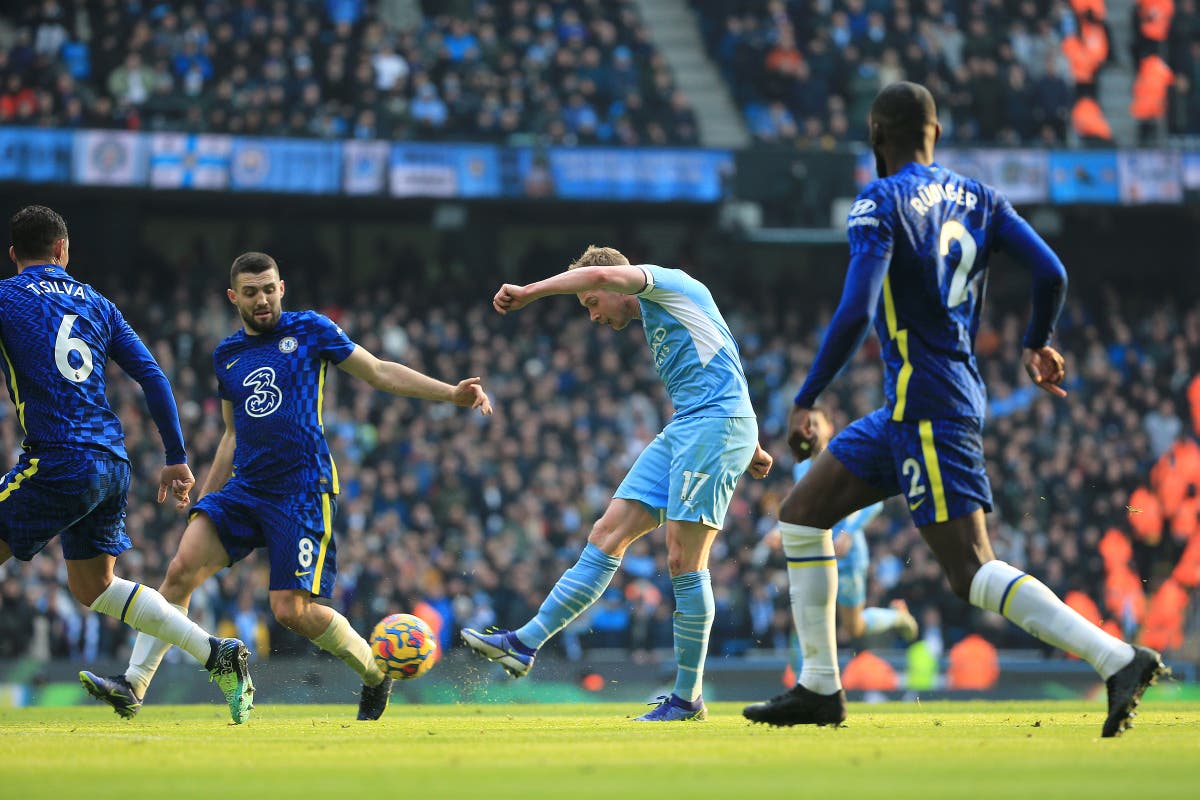 Chelsea head to Manchester City for Saturday’s early Premier League kick-off, knowing they realistically need a victory to blow the title race back wide open. Pep Guardiola’s side have been relentless in the league of late and opened up a 10-point lead between themselves and the Blues, so there’s very little pressure on City to go all-out for the win.

That said, they could really exert their dominance and make a point over last year’s Champions League final being a one-off if they took the game to Thomas Tuchel’s team and triumphed to further increase their lead at the top.

In midweek it was Chelsea who triumphed, in the Carabao Cup semi-finals against Tottenham, to book themselves a spot at Wembley and await either Liverpool or Arsenal. City, by contrast, have had over a week to recover since their FA Cup third-round win over Swindon. They have won seven in a row in all competitions and 14 of the last 15, a phenomenal run of form which has them looking at yet another league title. Follow all the updates from Man City vs Chelsea below:

City are trying to manage the remaining time but Mount gets the ball into space on the right and swings a cross over to Lukaku. John Stones gets to the ball before the Chelsea striker and boots it clear.

84 mins: Chance! Phil Foden has the chance to secure the points for Manchester City. Raheem Sterling brings the ball in from the right and lays it off to Foden. He lets the ball run across his body and hits one with his left foot. He doesn’t catch it quite right though and lifts the effort over the crossbar.

81 mins: Chelsea win a free kick over on the left wing, deep in Man City’s half. It’s a good chance to work the ball into the box but it’s wasted by Callum Hudson-Odoi who knocks a flat cross into the penalty area that is easily cleared by Kevin De Bruyne.

Mason Mount is the final Chelsea change coming on to replace Marcos Alonso. Can he swing this match back in Chelsea’s favour? He’s only got about 10 minutes to make an impact.

78 mins: Chance! Much better from Chelsea who move the ball quickly up the Kante. He plays it in behind for Azpilicueta on the overlap and and Chelsea’s captain slots a teasing ball into the six-yard area, Timo Werner lunges himself at the pass but it just evades him and Ederson scoops it up.

75 mins: Chelsea have to open themselves up now as they go in search of an equaliser. That’s leaving space in the back line for Foden to exploit. Cancelo fires a diagonal ball up to Foden who’s positioned in the middle of Malang Sarr and Thiago Silva. As the ball drops Sarr wins the header and knocks it back to Kepa Arrizabalaga to end the attack.

72 mins: Callum Hudson-Odoi and Timo Werner are on for Chelsea. They were brought on just before Manchester City’s opener replacing Hakim Ziyech and Christian Pulisic.

Chelsea have to go after City now. If they want to keep their title hopes alive they can’t lose this game.

70 mins: What a goal! A long ball from Chelsea is won by City and the ball is knocked to Joao Cancelo. He feeds it up to Kevin De Bruyne who shakes off a tackle and goes on a run down the inside left channel. He cuts inside and brings the ball to the edge of the ‘D’ before curling a low shot into the bottom right-hand corner. Kepa Arrizabalaga leaps across but can’t reach it and the ball finishes in the back of the net! What a finish from Kevin De Bruyne.

66 mins: Callum Hudson-Odoi and Timo Werner are warming up for Chelsea. N’Golo Kante flicks the ball up to Romelu Lukaku in the middle of the pitch. He turns it towards goal but is clipped by Rodri and goes down. The referee lets play go on and City quickly feed it over to Sterling on the right. He drives into the box and shoots. His effort goes through the legs of Sarr and narrowly wide of the back post! Good chance for City.

63 mins: Save! A fine run from Grealish sees the forward brought down just outside the Chelsea penalty area. The City players try to convince the referee that the foul was made in the box but he’s not swayed and awards a free kick.

Kevin De Bruyne takes it and whips a shot towards the near post but Kepa Arrizabalaga is across nicely and palms the ball wide of goal.

60 mins: Man City have injected a touch more pace into their attacking play with Foden playing Sterling into the box. He gets tackled by Sarr but the loose ball comes to Bernardo who follows Sterling into the area. He drives towards the byline and squares a pass into the six-yard area but Kepa safely scoops up the ball.

COVID-19: Ontario’s top doctor ‘starting to have much more hope’