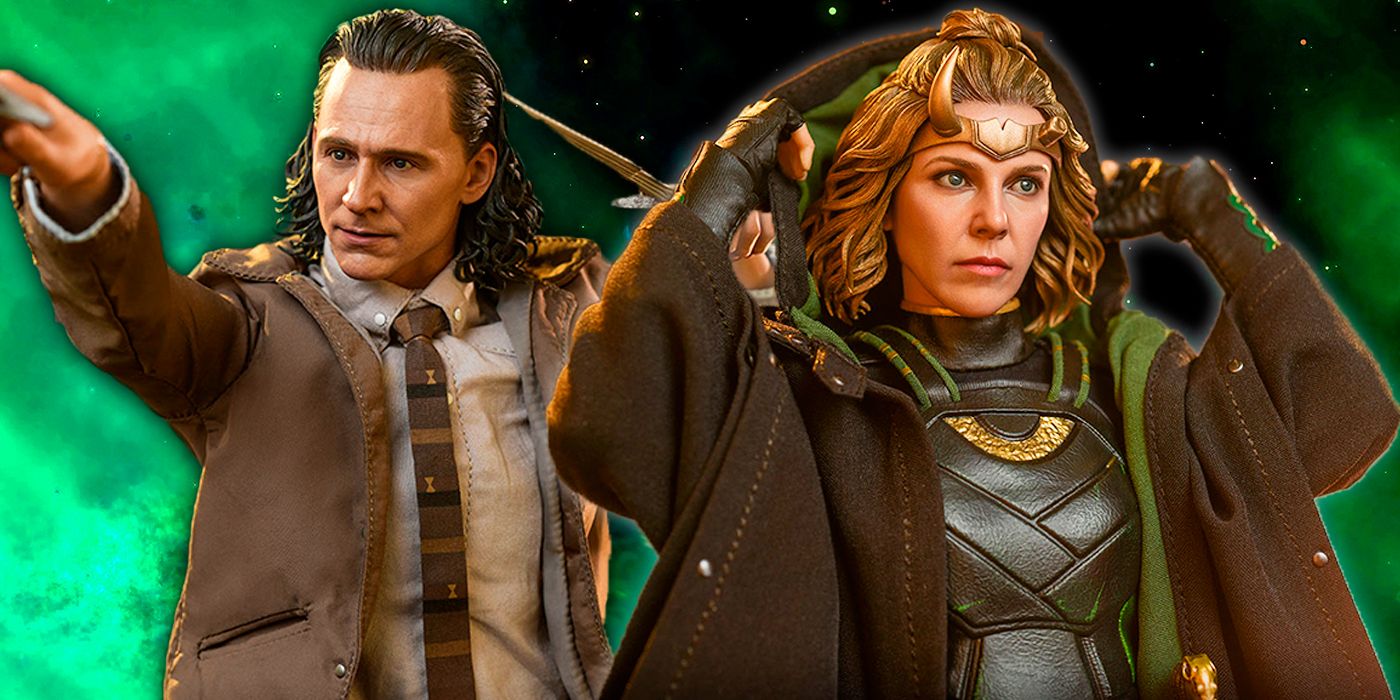 Fans of Loki’s hit Disney+ series can now pre-order Hot Toys figures of the enchanting duo, Loki and Sylvie, thanks to Sideshow Collectibles.

Fans of the Disney+ series Loki can now purchase a miniature version of Tom Hiddleston’s trickster.

Hot Toys has unveiled its official figures for both Loki and Sylvie from the Loki series. Both can now be pre-ordered through Sideshow Collectibles, with Loki priced at $275 and Sylvie priced at $270. The figures feature the characters with their iconic looks from the series, as well as plenty of interchangeable pieces, including a hand with the green strands of magic both variants are known to use. However, neither figure will be released until 2023 at the earliest, with shipping dates currently estimated to be between Jan. 2023-Mar. 2023.

The Loki sixth scale figure by Hot Toys captures the Marvel Cinematic Universe’s Loki, with the character’s trademark slicked-back hair and expressive eyes on display. He wears his iconic TVA suit from the series and stands at 12.2 cm. Included with the figure are signature weapons, and highly detailed accessories including a sword, a sword with fire effects, a pair of daggers, a computer, a tempad, a collar, a reset charge device with effect, a Time Door backdrop and a themed figure stand. He even comes with Miss Minutes, who has her own different expressions.

As with Loki, the Sylvie figure perfectly captures actor Sophia Di Martino’s likeness. This one stands at 11.02 cm and features Sylvie in her onscreen costume with her blonde locks tucked beneath her horned crown. While she doesn’t come with a Miss Minutes figure, the Sylvie statue still includes plenty of goodies to excite fans, including a highly detailed weapon and accessories including Sylvie’s blade, a prune stick with interchangeable ends, tempad, reset charge device and effect, Time Door backdrop and a themed figure stand.

Loki ended its first season with a bang as Sylvie helped to send the universe into a state of chaos, ultimately unleashing the multiverse that has been teased by other MCU projects. While the series is the first of the Marvel shows on Disney+ to have a second season confirmed, details for the forthcoming season remain sparse. A rumor, however, does suggest both Loki and Sylvie will make an appearance in Doctor Strange in the Multiverse of Madness.

The first season of Loki is currently streaming on Disney+.

Why That ’70s Show’s Forgotten First Spinoff Failed So Miserably

Nicole Sobon is a freelance writer for CBR and has been with the site since January 2017. She currently covers news and writes features and dabbles in writing lists from time-to-time. Prior to her work at CBR, Nicole served as the Editor in Chief for MCU Exchange for nearly two years, helping to establish the site as one of the go-to sources for news regarding the Marvel Cinematic Universe. Before that, she ran a book review site for approximately two years, where she shared her views on forthcoming releases while also helping readers connect with writers. When she’s not writing about comics and movies, she spends her time writing Young Adult books, including the Emile Reed series. You can reach her on Twitter at @NicoleSobon.

In Japanese court, five ask N. Korea to pay for their suffering