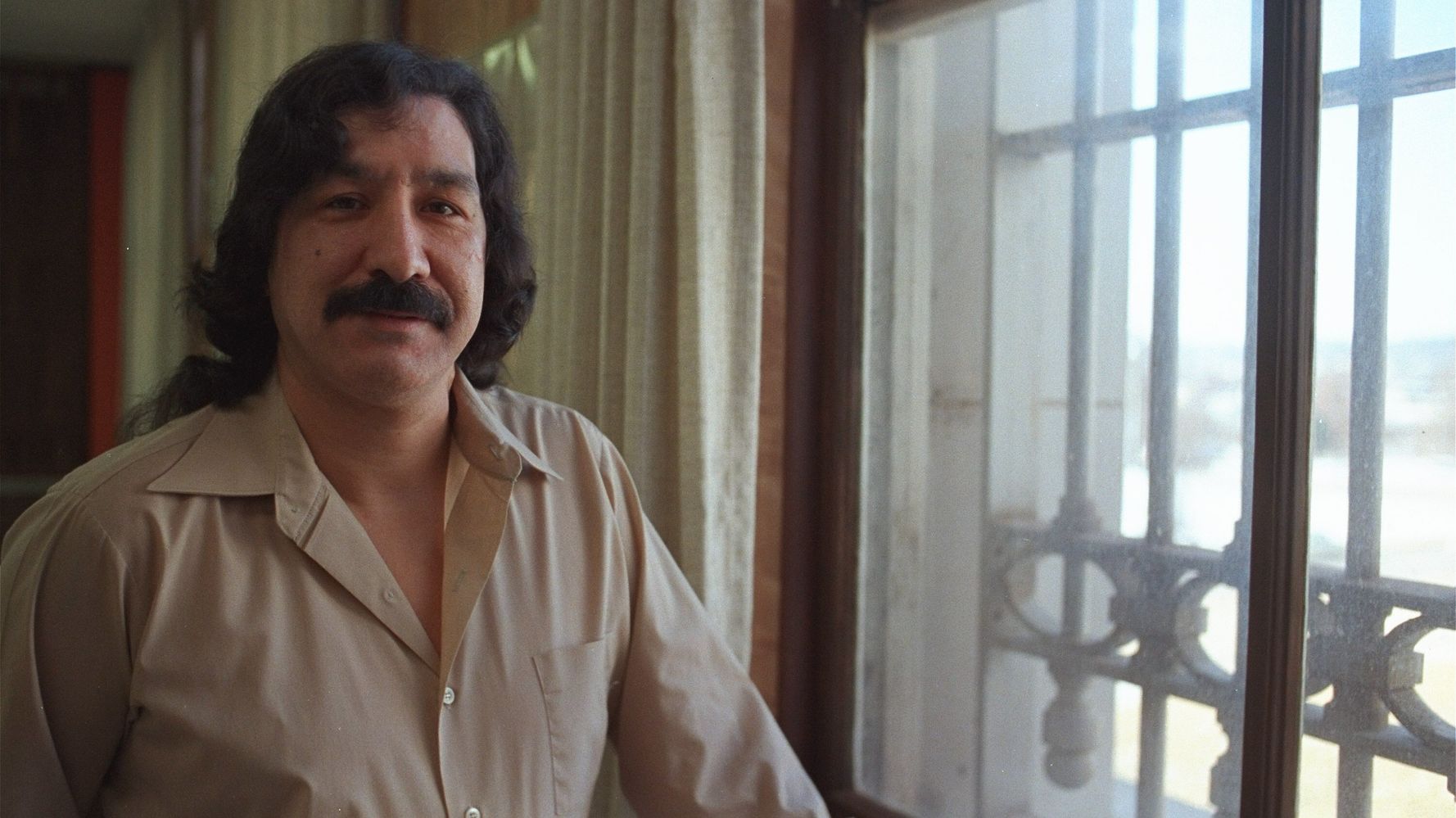 Never mind that he shouldn’t be in a federal prison at all.

Leonard Peltier, the Native American rights activist whom the FBI put behind bars decades ago without any evidence that he committed a crime, tells HuffPost that his facility’s prolonged COVID-19 lockdowns and failure to provide at least some inmates with booster shots has left him ― and likely others ― unbearably isolated and preparing for death.

“I’m in hell,” Peltier said in a Friday statement, “and there is no way to deal with it but to take it as long as you can.”

Peltier, who is 77 and has serious health problems including diabetes and an abdominal aortic aneurysm, said “fear and stress” from the prison’s intense coronavirus lockdowns are taking a toll on everyone, including staff. He described conditions like having next to no human contact or access to phones sometimes for weeks, no access to regular showers or substantial food, and not even the ability to look out a window or have fresh air.

“Left alone and without attention is like a torture chamber for the sick and old,” he said.

Peltier’s facility, a high-security penitentiary in Florida called USP Coleman I, is currently one of 98 federal prisons at a Level 3 COVID-19 operational level, which means its COVID medical isolation rate is at the highest level. For the facility’s 1,335 inmates, this translates to no contact with other people within the facility and no visitation from anyone externally.

The Coleman facility has been in its latest COVID lockdown since Jan. 11, according to Peltier’s attorney, Kevin Sharp. It’s been imposing dayslong and sometimes weekslong COVID lockdowns dating back to March 2021. Some of the longer stretches were March 6-15, June 14-30, and Dec. 12-Jan. 4, said Sharp.

Peltier says it’s not just mentally excruciating to endure constant lockdowns. He said he and others on his cellblock still haven’t gotten their COVID booster shots. They should have been offered them by now; all people incarcerated in federal prisons gained access to the initial round of vaccines last May, which means it’s well past the six-month window for getting boosted to stave off potential serious illness or death.

In Peltier’s case, he got his first COVID-19 vaccination shot in January 2021 and his second in May 2021, according to Sharp, which means he was due for his booster in November. Peltier asks the prison’s medical staff “every chance he gets” when he and others in his cellblock will get their booster shots, said Sharp, and they always say they don’t know.

People living in prisons are at a higher risk of contracting COVID-19 because of factors like being in close quarters, poor ventilation in old facilities and the fact that some prison staff aren’t getting vaccinated. But when lockdowns mean being denied human contact for weeks at a time and no details on when a COVID-19 vaccine booster will be available, the situation feels untenable for inmates like Peltier.

“They are turning an already harsh environment into an asylum,” he said.

It’s hard to know how many people within the massive federal prison system have not received their booster shots. There are currently 153,855 people incarcerated in federal prisons, of which 135,100 are in facilities operated by the Federal Bureau of Prisons.

Donald Murphy, a spokesman for the Federal Bureau of Prisons, said the department isn’t making data publicly available relating to inmates’ booster shot rates. Instead, he pointed to the department’s COVID resource webpage, which includes data on the total number of COVID-19 vaccination shots that have been given to inmates and staff since last year.

“We are not breaking this number down to reflect booster shots only,” he said.

The Bureau of Prisons has received a total of 316,714 doses and administered 287,681 doses of the COVID-19 vaccine to staff and inmates since it became available last May, according to its website. Those numbers include the two-dose vaccines offered by Pfizer and Moderna, and the one-dose vaccine offered by Johnson & Johnson.

As for the conditions Peltier described at the Coleman facility, Murphy declined to comment on “anecdotal allegations” or on “conditions of confinement for any particular inmate.”

He did say that the Coleman facility “is currently administering COVID booster vaccinations for inmates,” despite the fact that Peltier has not been offered one and has seen no signs of it being offered to other inmates on his cellblock.

Murphy also said the Bureau of Prisons follows Centers for Disease Control and Prevention guidance with regard to COVID-19 quarantine and medical isolation procedures.

Here’s Peltier’s full statement on the conditions inside Coleman, provided to HuffPost:

COVID has turned Coleman Prison back to the Dark Ages. I remember a time at Marion USP when I was put in solitary for so long, when 72 hours could make you start to forget who you were. I once wrote down who I was on the concrete floor under my bed, so if I forgot, I could read it back to myself. I traded my last cigarette for a pencil. I’d rush to the door when a guard left the meager plate of food, just to see a glimpse of another human being — even if it was one that hated me, it was another human and good for my mind for a minute.

I’m in hell, and there is no way to deal with it but to take it as long as you can. I cling to the belief that people are out there doing what they can to change our circumstances in here. The fear and stress are taking a toll on everyone, including the staff. You can see it in their faces and hear it in their voices. The whole institution is on total LOCKDOWN.

In and out of lockdown last year at least meant a shower every third day, a meal beyond a sandwich wet with a little peanut butter — but now with COVID for an excuse, nothing. No phone, no window, no fresh air — no humans to gather — no love ones voice. No relief. Left alone and without attention is like a torture chamber for the sick and old.

Where are our human rights activists? You are hearing from me, and with me, many desperate men and women! They are turning an already harsh environment into an asylum, and for many who did not receive a death penalty, we are now staring down the face of one! Help me, my brothers and sisters, help me my good friends.

Peltier is America’s longest-serving political prisoner. He’s been behind bars for 45 years for the 1975 murders of two FBI agents during a shootout on a Native American reservation ― something he has long said he didn’t do, even when it meant he could have been paroled if he said he did. His trial was riddled with misconduct and even the U.S. attorney who helped put Peltier in prison so long ago is now pleading with President Joe Biden to grant him clemency because, he says, federal officials never had evidence that he committed a crime.

Biden is likely Peltier’s last chance at freedom before he dies in prison.

Denial of responsibility! NewsConcerns is an automatic aggregator of the all world’s media. In each content, the hyperlink to the primary source is specified. All trademarks belong to their rightful owners, all materials to their authors. If you are the owner of the content and do not want us to publish your materials, please contact us by email – admin@newsconcerns.com. The content will be deleted within 24 hours.
CoronavirusCOVID-19prison
0
Share