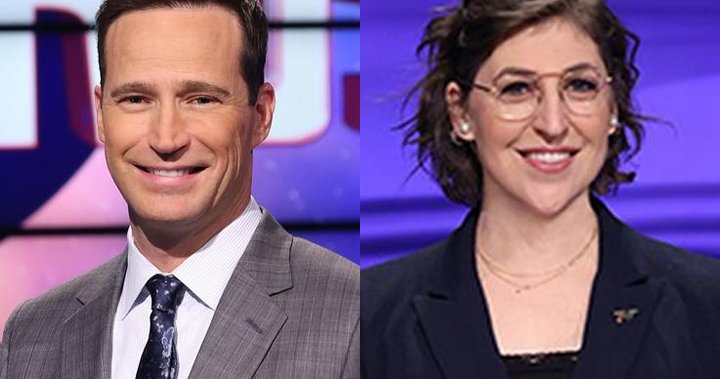 Sony touted Richards and Bialik as a two-person replacement for Trebek, who died of pancreatic cancer last November after hosting Jeopardy! for 36 years.

Richards will take over as the new daily host of the show at the beginning of Season 38, in addition to his duties as executive producer, Sony said. Bialik will host the program’s various primetime and spin-off specials.

“We are thrilled to begin the next chapter of America’s Favorite Quiz Show with Mike hosting our daily show and Mayim hosting new versions of Jeopardy!,” Ravi Ahuja, chairman of global television studios and corporate development for Sony Pictures, said in a statement.

Ahuja said the studio put a “tremendous amount of work and deliberation” into choosing the new hosts, and that executives “pored over footage from every episode, reviewed research from multiple panels and focus groups, and got valuable input from our key partners and Jeopardy! viewers.”

The decision came as a blow to some fans who had campaigned for other candidates to take the job, such as former Reading Rainbow star LeVar Burton.

“Why couldn’t they just give it to LeVar Burton like literally everyone on the planet wanted?” conservative commentator Meghan McCain tweeted, amid a flurry of fan unrest after the announcement.

Sorry @Jeopardy..but you missed your chance to really make an impact here. We are all on #TeamLevar… Love you @levarburton. What’s going to be the game show you host that we ALL will watch. #levaronjeopardy #levarburton https://t.co/PeCuiHsCxT

“I have said many times over these past weeks that no matter the outcome, I’ve won,” Burton tweeted last week, when reports first emerged that Richards was the frontrunner. “The outpouring of love and support from family, friends, and fans alike has been incredible! If love is the ultimate blessing and I believe that it is, I am truly blessed beyond measure.”

I have said many times over these past weeks that no matter the outcome, I’ve won. The outpouring of love and support from family, friends, and fans alike has been incredible! If love is the ultimate blessing and I believe that it is, I am truly blessed beyond measure. ????????

Bialik broke into Hollywood as a child actor in the late 1980s, appearing in her breakthrough show Blossom as well as hits like The Facts of Life. She later got a doctorate in neuroscience and racked up various live-action and animated TV credits, before landing the ongoing role of Amy in The Big Bang Theory.

Richards is currently the executive producer of both Jeopardy! and Wheel of Fortune, and he previously served in the same role on The Price is Right and Let’s Make a Deal. His hosting credentials include the shows High School Reunion and Beauty and the Greek.

Richards faced renewed criticism last week over a pair of decade-old lawsuits dating back to his time in charge of The Price is Right. Two models had accused Richards of discrimination over his alleged response to news that the women were pregnant.

“These were allegations made in employment disputes against the show,” Richards said in a statement to Jeopardy! staff, which was published by Variety last week. “I know firsthand how special it is to be a parent. It is the most important thing in the world to me. I would not say anything to disrespect anyone’s pregnancy and have always supported my colleagues on their parenting journeys.”

He also told that he was not responsible for choosing the next host.

“This is not my decision and never has been,” he said.

Denial of responsibility! NewsConcerns is an automatic aggregator of the all world’s media. In each content, the hyperlink to the primary source is specified. All trademarks belong to their rightful owners, all materials to their authors. If you are the owner of the content and do not want us to publish your materials, please contact us by email – [email protected]. The content will be deleted within 24 hours.
Alex TrebekBig Bang TheoryEntertainmentjeopardyjeopardy! hostLeVar BurtonMayim BialikMike Richards
0
Share

49ers to start Jimmy Garoppolo over Trey Lance vs. Chiefs