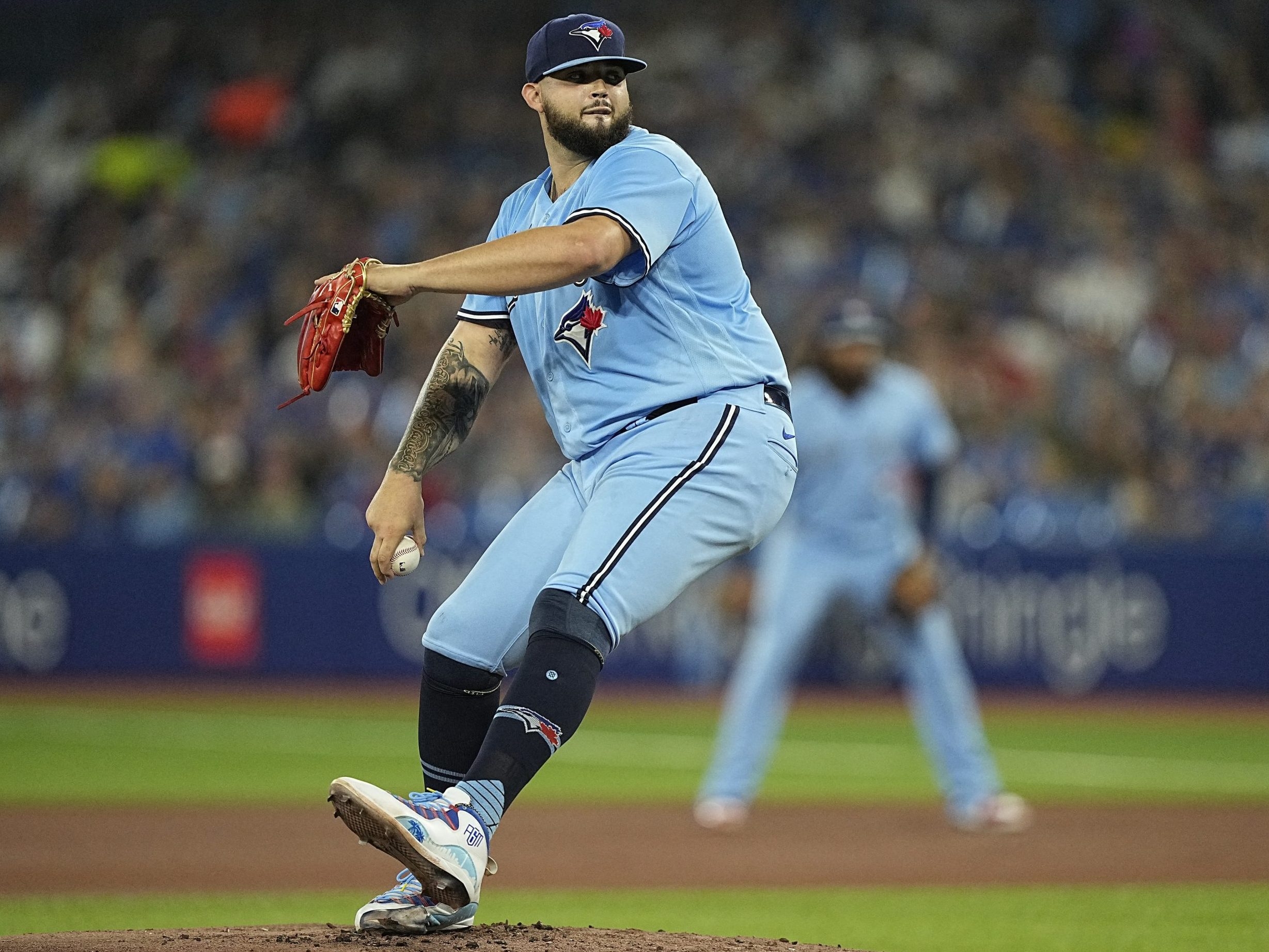 ST. PETERSBURG, Fla. — Given that the process of getting the ball out of Alek Manoah’s hands seven innings into a game can be a chore, imagine suggesting to the Blue Jays right-hander that he take an extra day off?

That’s precisely what the team has done here in a crucial four-game series against the Tampa Bay Rays, pushing his next outing to Saturday rather than Friday, where it normally would fall.

And Manoah is all for it.

There are multiple potential benefits to the move, announced by manager John Schneider prior to Thursday’s first of four games here against the Rays.

First, projecting forward, it has Manoah available for the season finale in Baltimore, should that game be of importance in the Jays playoff positioning. (As an aside, Schneider said that if a win was required to secure the top wild-card spot and thus a first round at home, it would be Manoah’s assignment.)

If not, the big man can just charge up for the opening of a likely playoff series two days later.

But the biggest benefit, the Jays hope, is that an extra day to breath and recover, will help the bull of their starting staff have a little extra for what the team intends to be a meaningful playoff run in October.

“It’s going to enhance his stuff a little bit and maybe give him a little bit better velocity early in the game,” Jays pitching coach Pete Walker said as the team dusted the sleep out of its eyes following a flight from Philadelphia that didn’t get them to their St. Pete hotel until 3:30 a.m. on Thursday.

“That’s what we’re hoping for. At this stage of the season, he’s been great. He’s answered the bell the entire season and we want him to be strong for the finish and the potential post-season, obviously.

“We’ve got to get there first and solidify a position, but he’s a guy we want to be strong through the whole post-season. Right now, giving him an extra day is really important.”

While Manoah has shown minimal signs of wear and tear in this his first full big league season, his work load has been hefty. As Walker noted, there have been recent games where his fastball velocity his dipped But his 183.2 innings are at team high and with a 14-7 win-loss record and an ERA of 2.40, he’s been critical to getting the Jays in a favourable playoff spot.

The added day for Manoah triggered a juggling of the rotation for this series. Friday’s contest was unofficially “to be determined” prior to the series opener, but the Jays plan to go with Mitch White and however many bullpen arms are needed. (And given the rough outing by Jose Berrios on Thursday, that number might be reduced.)

“It’s the best bet for (Manoah) right now, for him and for us,” Schneider said of the switch. “Alek is checking every box in being ready and staying prepared in between starts. He’s had extra day a few times but we’re just trying to take advantage of it at this time of year.”

Given his long and frustrating injury history, the Jays are understandably cautious in talking about the prospects of pitcher Nate Pearson joining the team before the season is out.

But the team is quietly encouraged by how the former top prospect has been progressing through his rehab assignment while recovering from a lat strain.

On Wednesday, Pearson tossed 1.1 innings for the triple A Bisons, striking out four. If his recovery continues, is it possible that the once highly thought of starter could contribute?

“It’s just a matter of how he bounces back and being able to provide multiple innings and overall be healthy,” Schneider said of Pearson. “If those things are there – he’s pitched at this level before. It’s knowing the person, looking at the stuff and see how he’s feeling.”

Santiago Espinal won’t be available for most of the critical games down the stretch after the team placed the versatile infielder on the 10-day injured list with a left oblique strain. Espinal suffered the injury on Wednesday in Philadelphia after making an awkward swing in an early at-bat … As for the mystery of reliever Anthony Bass, who remained in the bullpen on Wednesday in Philadelphia, Schneider said the right-hander was available and likely to see action on Thursday. “Bass just ended up a couple of days, he’s 100 per cent ready to go,” Schneider said … Lourdes Gurriel Jr. (hamstring strain) is with the team in the Tampa area and continues to progress through baseball activities, Schneider said. No timetable on the outfielder’s return, however … The jockeying for post-season spots still has a dozen games to go, but worth nothing: The Jays had won 15 of their previous 19 road games heading into Thursday’s contest … The Jays all-time record at the Trop heading into this series: 85-128  … The World Series odds on the Jays seem to fluctuate almost daily now. After tough losses on Sunday and Wednesday, bookmaker Bodog dropped the Jays to 16-1, or seventh choice overall.