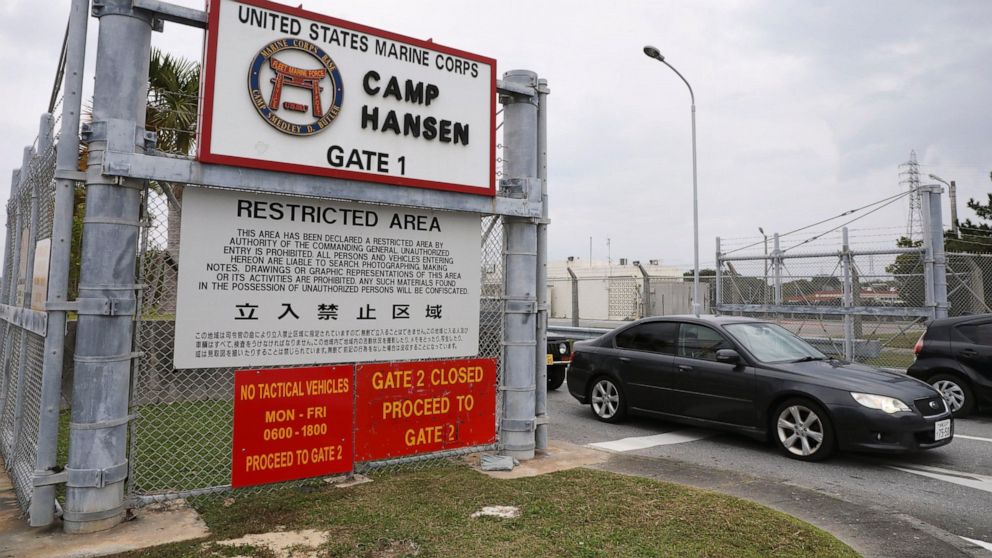 Japanese Foreign Minister Yoshimasa Hayashi has asked that the U.S. military in Japan stay inside its bases to prevent the further spread of COVID-19

TOKYO — Japanese Foreign Minister Yoshimasa Hayashi on Thursday asked that the U.S. military in Japan stay inside its bases to prevent the further spread of COVID-19.

Hayashi said he spoke on the phone with U.S. Secretary of State Antony Blinken and was promised utmost efforts to ensure people’s health. It was not immediately clear if a base curfew would be issued.

Maj. Thomas R. Barger, a U.S. Forces in Japan spokesperson, said he could not comment on the request, but that a team was carefully monitoring cases and trends.

Hayashi’s request came as the U.S. military is promising more stringent measures to curb spreading cases. The new measures require all personnel, even when fully vaccinated, to wear masks on base until a third negative coronavirus test, and reiterate an order for all to wear masks when off base, Barger said.

American forces have come under fire after a spike in coronavirus cases in areas where they are based in large numbers, including Okinawa and Iwakuni, both in southern Japan.

Okinawa Gov. Denny Tamaki sent a request to Japan’s national government on Thursday for permission for the prefecture to strengthen its anti-virus measures.

A daily record of 981 people tested positive for COVID-19 in Okinawa on Thursday. In December, there were zero new cases on some days.

“If we all work together, we hope cases will come down,” Tamaki told reporters.

Japan has never had a lockdown, but measures have periodically been taken to restrict people’s activities, such as requesting stores and restaurants to close early or serve fewer people.

Tamaki has blamed U.S. soldiers for what he called “the alarming rise” of cases on Okinawa, which has been hit harder than the rest of Japan. He promised financial aid for businesses that abide by the restrictions.

Yamaguchi prefecture, where the Iwakuni base is located, also sent a request to the national government to strengthen anti-virus measures after it confirmed a record 181 daily COVID cases. Yamaguchi prefectural officials suspect the illness spread from U.S. soldiers and Japanese military personnel who work on Iwakuni.

Cases are gradually rising throughout Japan, including in Tokyo, which reported 641 new cases Thursday, up from 390 the previous day. Tokyo Gov. Yuriko Koike has so far been reluctant to order restrictive measures.

Japan beefed up border controls late last year, preventing travel from abroad except for returning residents and citizens. American soldiers are basically free to enter and move about Japan under a bilateral security agreement. The U.S. is Japan’s most important ally.

COVID-19 cases among U.S. Forces in Japan now total 1,784, about a third of them on Okinawa, according to USFJ. Iwakuni has reported a total of 529 cases.

“The mitigation measures we have instituted throughout USFJ are intended to protect our force’s readiness, the well-being of our families, and the health of Japan’s citizens. We recognize we all have a part to play in keeping our communities safe,” U.S. Forces in Japan said in a statement.

This week, Japan has reported more than 2,000 cases daily. About 80% of the population has had two vaccine shots, but boosters are just getting started. Japan has so far had 18,300 coronavirus-related deaths.

Denial of responsibility! NewsConcerns is an automatic aggregator of the all world’s media. In each content, the hyperlink to the primary source is specified. All trademarks belong to their rightful owners, all materials to their authors. If you are the owner of the content and do not want us to publish your materials, please contact us by email – admin@newsconcerns.com. The content will be deleted within 24 hours.
antony blinkenCoronavirusCOVID-19 pandemicDisease outbreaksDiseases and conditionsGeneral newsGovernment and politicsHealth
0
Share

How long is it before Omicron symptoms appear after COVID exposure?