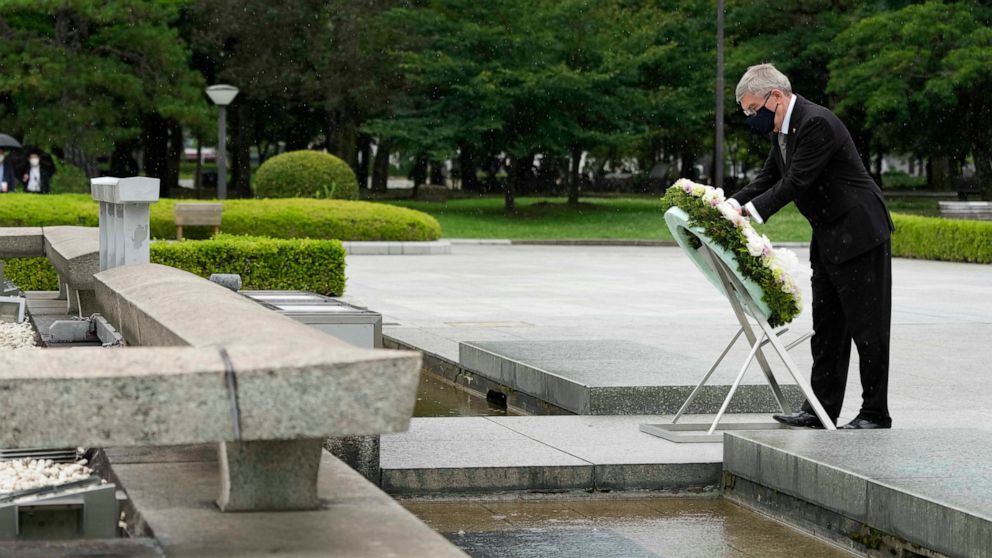 HIROSHIMA, Japan — IOC President Thomas Bach got a mixed reception in his visit on Friday to Hiroshima to mark the first day of the so-called Olympic Truce.

Such a one-day visit by a dignitary would ordinarily be routine a week ahead, but the Olympics are set to open next week with Tokyo under a state of emergency and with a substantial part of the population opposed to the games being held during the COVID-19 pandemic.

Bach’s vice president John Coates also appeared Friday in Nagasaki, the second city that was hit by an American atomic bomb in 1945.

Bach and Coates have been meeting daily with Japanese officials from Prime Minister Yoshihide Suga to Tokyo Governor Yuriko Koike, repeating their message that the Olympics will be “safe and secure.”

The Olympics and Paralympic involve 15,400 athletes and tens of thousands of others entering Japan, including media, broadcasters, officials, and judges and others.

The Olympics, already delayed by 12 months because of the pandemic, will be held with virtually no fans. Fans from abroad were banned several months ago, and last week Tokyo and three neighboring prefectures banned all local fans. A few outlying venues are expected to allow a smattering of fans.

On Thursday, Tokyo reported 1,308 new COVID-19 cases, up from 896 a week ago. It was the 26th straight day of cases being higher than a week previous.

A group of 11 anti-Olympic and pacifists groups submitted a letter to the city earlier this week opposing Bach’s visit. Separately, an online petition opposing the visit garnered 70,000 signatures.

Bach laid a wreath and observed a minute of silence in the rain in front of the Peace Memorial Park cenotaph. Faint voices of protesters, who were kept at a distance, could be heard shouting “go home Bach” and “you’re not welcome here.”

Dozens of protesters were seen near the Atomic Bomb Dome with signs that read “Cancel The Olympics” and “No Bach.”

“The COVID-19 situation is getting worse, it hasn’t come to an end, and I wonder why this has to go ahead,” said Sayuri Yamada, who identified herself as a medical worker. She was not among the protesters.

She said she did not oppose Bach’s visit, but raised questions about running unnecessary risks for the Olympics.

“It’s not that I don’t want him to come absolutely,” she said. “But rather, thinking about the safety of people, including the athletes, my opinion is like he doesn’t have to do this at a time when the risk is high.”

Takayoshi Kayano, who said he was an office worker, respected Bach’s right to visit but raised other issues.

“I think it’s fine to host the Olympics. But the no-spectator policy is a bit disappointing,” he said. “But to me, I feel the IOC seems to be only focused on making money.”

The official cost of the Tokyo Olympics is $15.4 billion, although government auditors have suggested it’s much larger. All but $6.7 billion is public money.

Denial of responsibility! NewsConcerns is an automatic aggregator of the all world’s media. In each content, the hyperlink to the primary source is specified. All trademarks belong to their rightful owners, all materials to their authors. If you are the owner of the content and do not want us to publish your materials, please contact us by email – admin@newsconcerns.com. The content will be deleted within 24 hours.
2020 Tokyo Olympic GamesCoronavirusCOVID-19 pandemicDiseases and conditionsGeneral newsHealthInfectious diseasesLung disease
0
Share