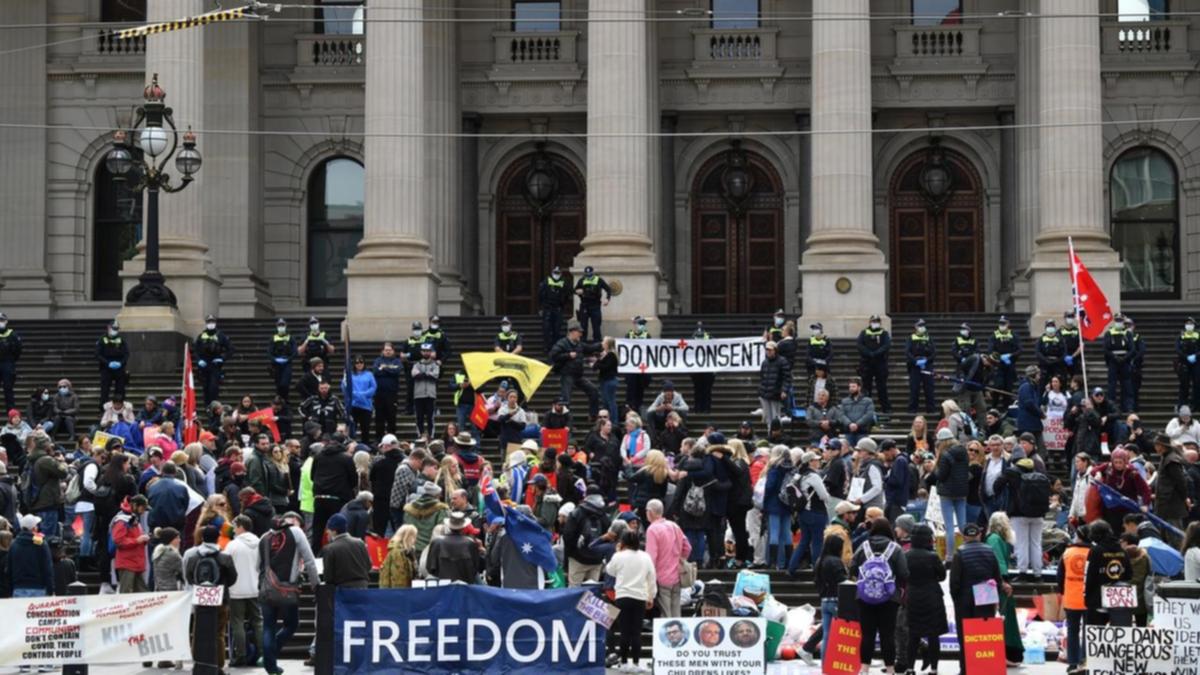 Victoria is at risk of a right-wing extremist attack, a global terrorism expert has warned, as protests continue against the state government’s pandemic legislation.

Deakin University Professor Greg Barton says while the protests started as an expression of frustration against the government, they have attracted a wide range of groups.

Barton said these groups were using the current climate to “galvanise and recruit”.

“I don’t think there’s any evidence of anyone planning violence, but the threat, if and when it should come, will come from somebody acting by themselves – a lone actor,” he said.

The threat, if and when it should come, will come from somebody acting by themselves

“We know that with lone actors, the motivation tends to be the desire to be publicly accepted, to go from zero to hero. We saw that dramatically with the Christchurch attack.”

“These are the things police will be worried about here and it’s not because you look at somebody bringing a noose to a protest because he’s planning to kill somebody, it’s not as simple as that, but the risk is there,” Barton said.

Protesters this week have threatened to kill Victorian Premier Daniel Andrews, and his effigy was thrown on a makeshift wooden gallows on Monday.

Victoria Police have spoken to the driver who towed the gallows and issued the 48-year-old Badger Creek man with a warning related to traffic offences.

They also confirmed they are investigating “a number of recent incidents involving threats directed at members of parliament”.

“As those investigations are ongoing and relate to security matters, it would be inappropriate to provide further details at this time,” a spokeswoman said.

Several people had been charged over the past year for “threats directed at high profile members of the community, including members of parliament”, she added.

Alleged far-right extremist Imre Pelyva, 36, has been charged with incitement-related offences by the counter-terrorism unit and will face court next week, AAP has confirmed.

Andrews labelled the protesters “extremists” and accused other politicians of playing “political games” with the legislation.

We will not be intimidated into cowering away from our duty

“We will not be intimidated into cowering away from our duty … to govern our state, not to be popular but to do what is right.”

Deputy Premier James Merlino said he had not seen such violent rhetoric in the almost 20 years he had been in parliament and criticised the opposition for failing to condemn it.

Opposition Leader Matthew Guy said he will be speaking to his party members to stop them from attending further protests.

“You won’t be seeing anyone back out there,” he told said.

“We are concerned about some of the elements that are there. There is an extreme element now associated with the steps of parliament.”

Barton said it was no longer politically expedient for the opposition to be associated with the protest.

He also urged the premier to reconsider his attacks on the protesters, as there are people who don’t understand it.

“It’s his job to win them over and build confidence,” he said.

Denial of responsibility! NewsConcerns is an automatic aggregator of the all world’s media. In each content, the hyperlink to the primary source is specified. All trademarks belong to their rightful owners, all materials to their authors. If you are the owner of the content and do not want us to publish your materials, please contact us by email – [email protected]. The content will be deleted within 24 hours.
CrimeNewsPoliticsTerrorismVIC NewsVIC Politics
0
Share

Terrorists who use the internet are less successful