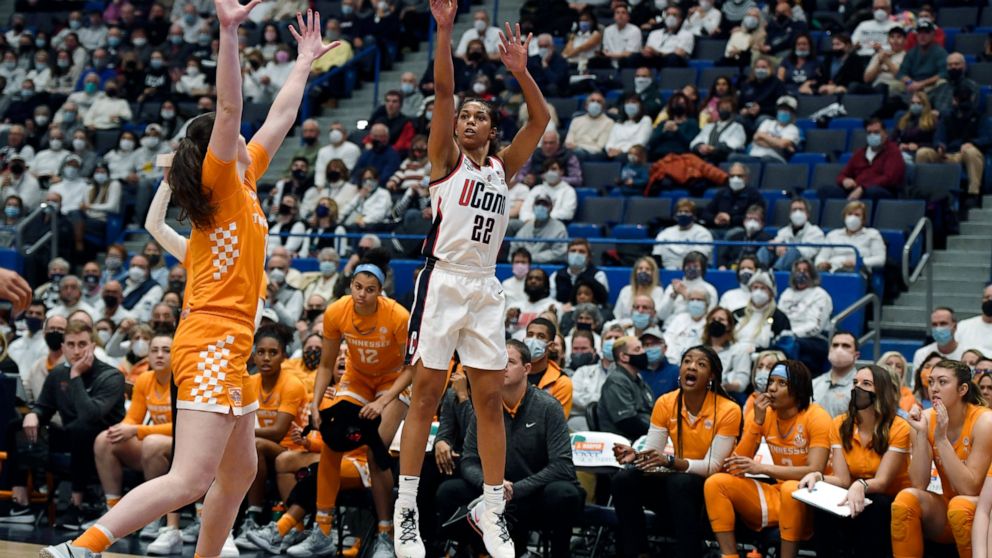 This was the 25th meeting in the storied series that was renewed in 2020 after a 13-year hiatus. The teams will play again next year in Knoxville, Tennessee. This was the first time since 2007 when both teams were in the top 10.

Fudd got the start when it was announced about an hour before the game that the Huskies would be missing her classmate, Caroline Ducharme. The Huskies didn’t say why she wasn’t playing. Ducharme scored in double figures in 10 of the team’s last 11 games.

Fudd scored the team’s first basket — a 3-pointer — and finished the opening half with nine points as UConn (15-4) built a 32-25 lead. Westbrook had 11 points in the first half.

Christyn Williams, who was scoreless in the opening 20 minutes and missed all seven of her shots, helped UConn blow the game open in the third quarter. She scored the first four points to start a 14-0 run that gave the Huskies a 46-25 lead.

Nika Muhl scored the final five points of the spurt, including hitting a 3-pointer that got coach Geno Auriemma to pump his fist in celebration. Auriemma returned to the bench after missing Wednesday’s game at Creighton with an illness that wasn’t related to COVID-19.

Tennessee (19-4), which has now lost three of its last four games, didn’t threaten the rest of the game. Jordan Horston scored 26 to lead the Lady Vols.

UConn sophomore Paige Bueckers will be evaluated by doctors Monday to determine the next steps in her rehab as she recovers from surgery on her left knee eight weeks ago that repaired an anterior tibial plateau fracture and lateral meniscus tear.

“Rehab’s going great, she looks fantastic,” Auriemma said at practice Saturday. “She’s done everything they’ve asked her to do and now we just got to take a look and see: How far has she come? What does that mean in terms of going forward?”

Tennessee: After winning 18 of their first 19 games, the Lady Vols have struggled lately dropping games to unranked Auburn and Florida as well as UConn. The Lady Vols will drop in the poll Monday.

UConn: This was UConn’s last chance to play a top opponent during the regular season. The Huskies finished 6-4 against non-conference opponents this season, avoiding their first non-winning season since 1987 against them.

Denial of responsibility! NewsConcerns is an automatic aggregator of the all world’s media. In each content, the hyperlink to the primary source is specified. All trademarks belong to their rightful owners, all materials to their authors. If you are the owner of the content and do not want us to publish your materials, please contact us by email – admin@newsconcerns.com. The content will be deleted within 24 hours.
BasketballCollege basketballCollege sportsGeno AuriemmaKnoxvilleNorth AmericaSportsTennessee
0
Share