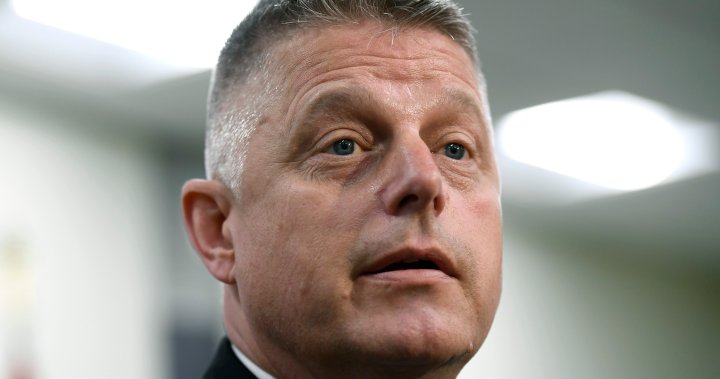 Vice-Adm. Haydn Edmundson has been charged following a military police investigation into a sexual assault allegation against him.

Military police laid one count of sexual assault and one count of indecent acts against Edmundson on Tuesday. The case will be handled through the civilian court system.

Edmundson, the military’s head of personnel, was placed on indefinite leave as the Canadian Forces National Investigation Service (CFNIS) looked into the allegation.

The investigation was opened after CBC News first reported that Edmundson was being accused of raping a subordinate woman officer in 1991.

That investigation followed exclusive reporting by Global News in February into allegations of sexual misconduct into other senior leaders in the Canadian Forces, which prompted parliamentary committee investigations and an independent, external review into the scope of the problem.

Military experts have deemed the sexual misconduct crisis as an existential issue for the Canadian Forces.

Denial of responsibility! NewsConcerns is an automatic aggregator of the all world’s media. In each content, the hyperlink to the primary source is specified. All trademarks belong to their rightful owners, all materials to their authors. If you are the owner of the content and do not want us to publish your materials, please contact us by email – admin@newsconcerns.com. The content will be deleted within 24 hours.
CanadaCanadian ForcesCanadian Forces sexual misconductCanadian Militarycanadian military sexual misconductHaydn Edmundsonhaydn edmundson investigationmilitary police investigations
0
Share

Who were the first to settle permanently on the Tibetan Plateau?