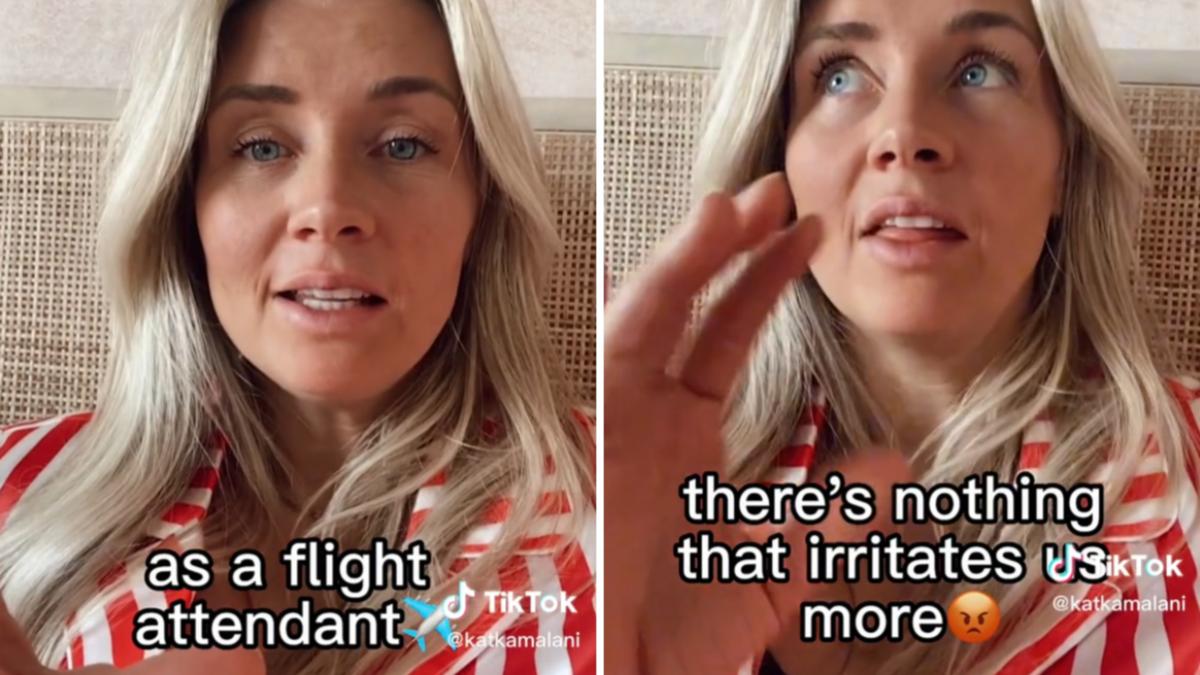 A former flight attendant has dished out on the “most irritating” passenger on board.

Kat Kamalani, from the US, shared a TikTok video urging travellers to avoid “complaining” about a “screaming child” on an airplane if they ever find themselves in the situation.

WATCH THE VIDEO ABOVE: The most irritating traveller.

“As a flight attendant, there’s nothing that irritates us more than people who complain about babies crying,” she said.

“I promise you, you won’t win… just be a kind human and don’t do this.”

“Or maybe ask the parent if they need help,” Kat said.

But she warned, “Don’t even ask us to be moved to a different seat because I promise you, no one else wants that baby to stop crying more than that parent.”

Her video has been viewed more than 1.8 million times – with many weighing in on the topic.

“I don’t mind the crying, I get so mad when parents allow their kids to kick the back of my seat,” one woman said.

One mum agreed with Kat’s statement, saying: “This is so true. I’ve travelled with my nephew and trust me, I prayed the whole flight that he didn’t scream the plane down for other people’s sake.”

Another wrote: “As a former flight attendant for 23 years… I completely agree.”

One said: “I had a lady next to me with an infant one time and I literally held her while the mother napped.”

Another suggested: “Amen! And it only makes us (flight attendants) more stressed when everyone around us is against us.”

One said: “I hate crying babies. But on a plane, I’m just sorry for their little ears and I don’t mind the noise. Smiles from strangers tend to help distract though.”

While another added: “I joked with a couple boarding my flight that I hoped they weren’t sitting next to us because my baby was colicky. The man responded, ‘Sweetheart, if a crying baby on our flight is the worst thing that happens today… it’s been a good day’.

‘This drives us bonkers’

The former cabin crew member previously revealed the one common thing passengers do that “drives them bonkers”.

She said travellers should never hit the call button, typically in the overhead console, when the aircraft is on the tarmac or during take-off and landing.

“So many people make this mistake,” she said in her TikTok video.

“If you’re doing this thing on an aircraft, you shouldn’t any more.

“This drives flight attendants absolutely bonkers when you hit the call button if we’re on the tarmac or we’re going up or down on the aircraft.

“Stop doing this while flying.”

She says the actions of passengers who press the overhead buttons during these inconvenient times can lead to serious consequences.

“The reason being… it’s a huge safety issue for us and we can get injured, and same with you guys,” she said.

“So when we’re on the tarmac, you hit this and it’s not some type of emergency, we’re going straight back to our seat.

“If you hit this while we’re going up on the aircraft or we’re going down when we’re landing, we won’t even come to the light, we’d come to it afterwards.”

She urged travellers to avoid hitting the button during landing or take-off unless it’s an emergency.

“Don’t hit this button if you need a barf bag, blanket, water, headphones, food, any of that stuff, because your flight attendant won’t be so happy,” Kat said.

“Just make sure you’re all set before take-off.”

Denial of responsibility! NewsConcerns is an automatic aggregator of the all world’s media. In each content, the hyperlink to the primary source is specified. All trademarks belong to their rightful owners, all materials to their authors. If you are the owner of the content and do not want us to publish your materials, please contact us by email – admin@newsconcerns.com. The content will be deleted within 24 hours.
LifestyleTravel
0
Share

The biggest risks of using fitness trackers to monitor health