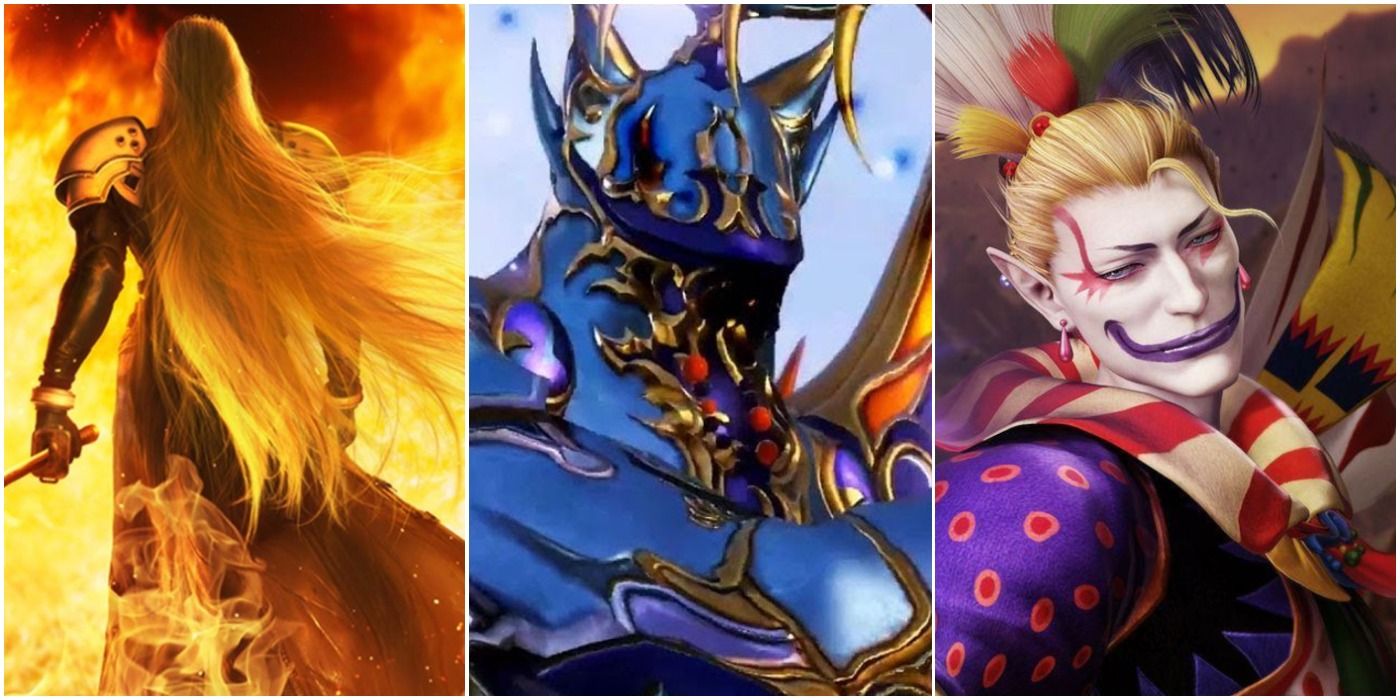 Despite the “final” in its name, Final Fantasy is an enduring video game franchise that started in 1987 and continues to this day. Since then, it’s been seen in manga, anime, and even full-length feature films. There’s even a Final Fantasy XIV-themed restaurant called Eorzea Café located in the Akihabara district in Tokyo, Japan! Final Fantasy‘s main titles number up to fifteen, with the sixteenth in development, and a new expansion for the Final Fantasy XIV MMORPG is slated for release in Fall 2021.

Such a robust franchise has seen its share of epic stories. The Final Fantasy franchise is filled with various antagonists who drive the main characters into action.  It’s undeniable that a majority of the series’ main antagonists are thoroughly evil, but some have more insidious goals and intentions than others.

15 Final Fantasy X: Sin Is A Creature Of Instinct Stuck In A Cycle Of Destruction

Sin takes the appearance of a grotesque flying whale whose main purpose is to protect Dream Zanarkand and destroy any nation that becomes too technologically advanced. Sin isn’t strictly a sentient entity and is rather an aeon summoned by Yu Yevon, who lost his sanity while trying to control the massive creature.

Only Yevon’s desire to protect Zanarkand remains, and he mindlessly summons Sin every time it’s defeated by the Final Aeon.

14 Final Fantasy XI: The Shadow Lord Is A Vengeful Spirit Bent On Dividing The Nations Of Vana’diel

Originally a kind Galkan Talekeeper named Raogrimm, the Shadow Lord is an entity that’s bent on revenge. He was betrayed by his teammate Ulrich during the expedition at Xarcabard, resulting in both Raogrimm and his lover Cornelia’s deaths.

Odin answers Raogrimm’s dying rage by granting him a corporeal form to enact vengeance. The Shadow Lord goes on to murder everyone who attended the Xarcabard expedition with him and eventually recruits the beastmen into waging war on San d’Oria, Windurst, and Bastok.

13 Final Fantasy IX: Kuja’s Rebellion Against His Creator Prompted An Existential Crisis That Drove Him Insane

Being a Genome, Kuja did not experience a childhood that could have introduced him to the full range of human emotions. As such, he could not empathize with others or feel guilt over his role as an Angel of Death… until his creator, Garland, revealed to Kuja that he was merely a pawn fated to perish once Zidane reached full maturity.

Faced with his own mortality, Kuja was finally able to feel remorse for the lives he destroyed.

12 Final Fantasy III: Xande & the Cloud of Darkness Worked Together To Return Everything To The Void

The Cloud of Darkness, emissary of the Void, manipulated Xande’s fear of mortality and convinced him to destroy the world’s crystals as a way to avoid death.

RELATED: 10 RPGs That Were Overshadowed By Final Fantasy

Xande believed destroying the crystals would flood the world with darkness and stop time, effectively granting him immortality. The truth is that everything would return to the Void and cease to exist.

Vayne is a crafty politician obsessed with power. He has his eyes set on becoming the new Dynast King so he can wrest control of the future from the Occuria, otherworldly beings that claim to be the Gods of Ivalice.

He murdered his two older brothers by his father’s command and later poisoned his own father to take control of the Archadian Empire.

10 Final Fantasy XV: Ardyn Fell From Grace & Gave Up His Sanity In Return For Vengeance

Ardyn Izunia was the compassionate firstborn of the royal Lucis Caelum line. He was meant to be the first Lucian King but was murdered by his jealous brother before he could take the throne.

After 2000 years of torturous captivity in the Angelgard, Ardyn was finally freed, and—driven by hatred for his brother—he was able to work on exacting revenge against the Lucis Caelum line.

Garland was once one of the strongest knights in Cornelia and was driven to insanity when Princess Sarah rejected him. He took her hostage and demanded to be made ruler of Cornelia in exchange for her life. This set off a chain of events that resulted in Garland creating a time loop that grants him immortality.

Garland absorbs the Four Fiends to become Chaos and ultimately secure his immortality.

Ultimecia fosters an intense hatred for SeeD and humanity due to her being persecuted as a sorceress. In order for her to accomplish time compression, she sends her consciousness to the past and uses previous sorceresses to accomplish her goals.

Ironically, Ultimecia set the ground for her own defeat by sending her consciousness back in time.

7 Final Fantasy VII: Sephiroth & Jenova Seek To Control The Planet By Fusing With The Lifestream

Sephiroth is a First Class SOLDIER who was infused with the alien lifeform Jenova’s cells while he was still in the womb. Learning the truth behind his creation drove Sephiroth insane and he burned Nibelheim to the ground, taking Jenova with him.

He believes he is the last Cetra and seeks to become a god by fusing with the lifestream and annihilating humankind.

6 Final Fantasy XIII: Barthandelus Wants To Sacrifice Millions Of Lives To Reunite With His Maker

Barthandelus poses as the human Galenth Dysley, a leader whom the people of Cocoon think they can trust. In truth, he is a fal’Cie, a god-like being that can morph its appearance.

He uses this skill to try and manipulate the heroes into defeating Orphan and destroying Cocoon, sacrificing all its population so that Barthandelus can reunite with Lindzei.

After an ancient battle between Zodiark and Hydaelyn, the world was split into fourteen pieces, including the souls of those living there. The Ascians are unsundered souls who seek to reunite their world by causing aetherial imbalances on other shards.

They accomplish this by fostering war and strife among the populations of the shards.

Also called Emperor Mateus, he is a rude, arrogant character who sneers at others and considers himself the only being fit to rule.

Claiming that humans have a false sense of justice, have abandoned love, and are naturally violent, he ultimately splits his soul into two: one that rules Heaven, and another that rules Hell.

Zemus is a Lunarian, a race of people living on the Moon who are far more advanced than Earth’s humans. Being a generally peaceful people, the Lunarians were waiting for humans to evolve far enough to be worth coexisting with.

Zemus viewed humans as inherently inferior and made plans to eradicate them.

2 Final Fantasy V: Made From Souls Of Pure Evil, Exdeath Seeks To Control The Void

Exdeath was once a tree in the Great Forest of Moore that housed banished, malevolent souls. Those souls eventually coalesced to become the powerful sorcerer Exdeath, a being consumed with the mission of controlling the Void and flooding the world with evil.

He is incapable of understanding or experiencing human emotion.

Kefka is acclaimed as one of Final Fantasy‘s best villains. He is a court mage who went insane while undergoing experimentation to become the first Magitek Knight. Highly destructive and hungry for power, Kefka is flippant and holds nothing but contempt for positive emotions.

He believes that love and hope are worthless concepts and that there’s no point in living.

NEXT: Final Fantasy: 10 Villains Who Were Only Trying To Do The Right Thing


Next
Mass Effect: 5 Powers That Are Truly Overpowered (& 5 That Are Underpowered)

68 percent of Americans say they know someone diagnosed with COVID-19: poll