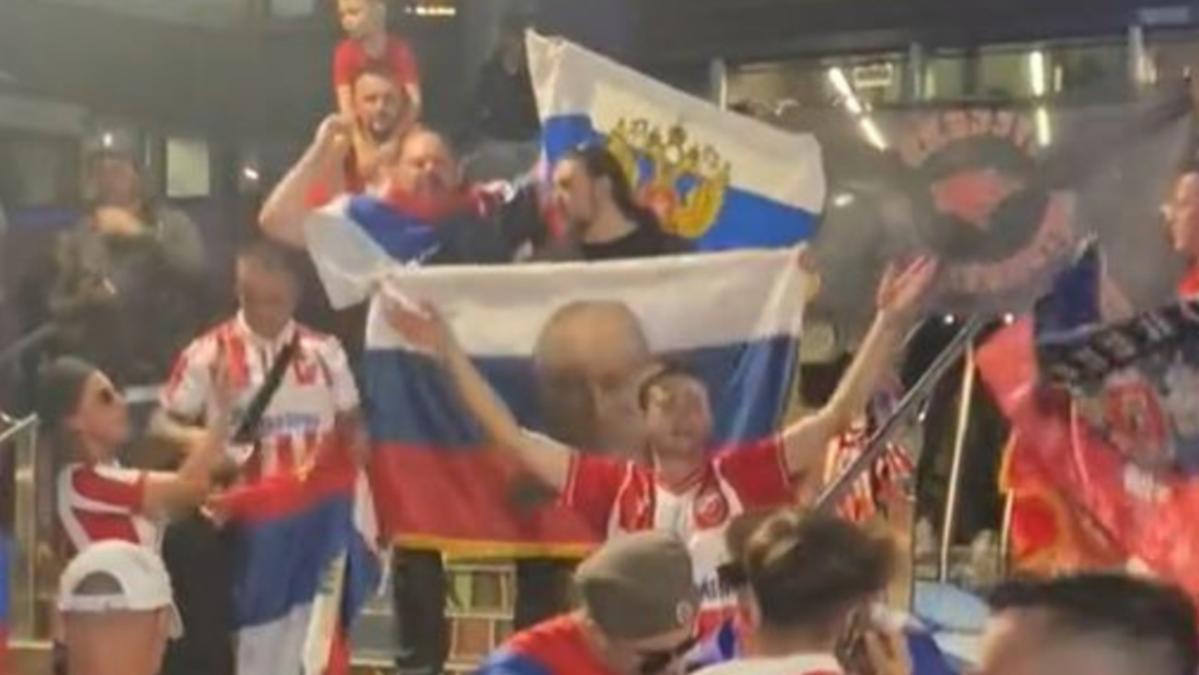 Four Australian Open spectators, including a man holding a Russian flag with Vladimir Putin’s face on it, were questioned by Victoria Police and evicted from Melbourne Park after allegedly threatening security.

A group of fans on Wednesday night gathered on the stairs outside Rod Laver Arena and Margaret Court Arena and began chanting, with several either holding or wearing various Russian flags.

WATCH THE VIDEO ABOVE: Russian fans evicted from the Australian Open.

Among them was a man who held up a flag featuring Russian president Putin, while wearing a T-shirt bearing the pro-war ‘Z’ symbol.

A different man had earlier been pictured with a Z symbol T-shirt inside Rod Laver Arena during the match.

Past and present Russian flags, the Russian Eagle flag, Belarusian flags and items of clothing with the Z symbol are prohibited items at Melbourne Park.

“Victoria Police intervened and are continuing to question them.

“The comfort and safety of everyone is our priority and we work closely with security and authorities.”

“Police spoke to four men after a Russian flag was produced on the steps at the tennis about 10.20pm on Wednesday 25 January,” a Victoria Police statement said.

“All four men were evicted.”

TA had initially permitted spectators to bring Russian and Belarusian banners to Melbourne Park, as long as they did not cause disruption.

But the policy was reversed last Tuesday morning after a Russian flag was prominently displayed courtside during a match involving Ukrainian player Kateryna Baindl.

That rule has been flouted on multiple occasions but Wednesday night’s incident was clearly the most blatant.

Russian and Belarusian players, such as Russians Rublev and Karen Khachanov and star Belarusians Aryna Sabalenka and Victoria Azarenka, are allowed to compete in Melbourne, but must do so under a neutral banner.

They were banned by the All England club from participating at Wimbledon last year in reaction to Russia’s ongoing invasion of Ukraine.

Russia is Belarus’s largest and most important economic and political partner.

Unlikely Aussies ‘just wing it’ in upset win over world No.1 doubles pair

Denial of responsibility! NewsConcerns is an automatic aggregator of the all world’s media. In each content, the hyperlink to the primary source is specified. All trademarks belong to their rightful owners, all materials to their authors. If you are the owner of the content and do not want us to publish your materials, please contact us by email – admin@newsconcerns.com. The content will be deleted within 24 hours.
Australian OpenSportTennis
0
Share