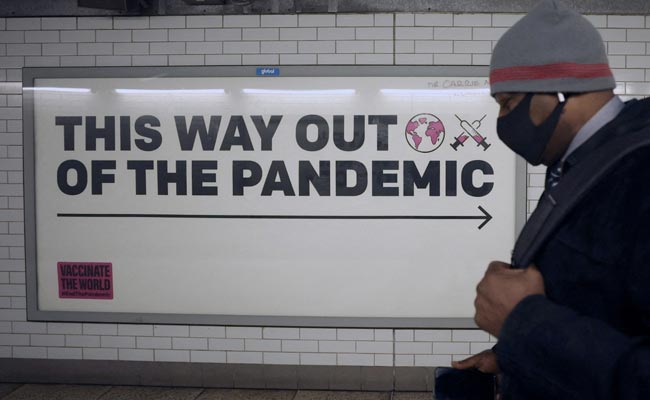 After an uncomfortable but relatively brief return to coronavirus restrictions triggered by the Omicron variant, England is going back to “Plan A” – learning to live with a disease that is probably here to stay.

The bet is that booster jabs, antiviral pills and Omicron’s lower severity will enable the government to manage outbreaks of a virus that cannot be shut out. Other countries equally keen to unshackle business and personal freedom will be watching.

Work-from-home guidance ended last week, and measures such as mask mandates and COVID passes, also introduced in England last month, lapsed on Thursday, returning the rules to where they were last July.

The UK Health Security Agency is preparing to switch focus to supporting vulnerable individuals rather than imposing national rules, according to a draft policy seen by Reuters.

“As we evolve to move to living with COVID, UKHSA’s COVID-19 response will move from a whole nation approach to a targeted response, focused on protecting the vulnerable,” read the paper, titled “UKHSA COVID-19 Vision – DRAFT”.

“We will ensure that our future response is more streamlined, flexible, and convenient for citizens and delivers value for money.”

British Prime Minister Boris Johnson, who has presided over 150,000 deaths, that ranks seventh in the world, was forced in December to introduce the “Plan B” restrictions, angering some of his own lawmakers. He now has a strong political imperative to scrap them.

As police investigate gatherings at his offices during COVID lockdowns, in apparent violation of laws he had himself imposed, he faces the biggest crisis of his career, while many of his members of parliament are determined that he must return life to near-normal.

Johnson himself told lawmakers last week: “As COVID becomes endemic, we will need to replace legal requirements with advice and guidance.”

He also said he would let the law that obliges people with COVID-19 to self-isolate lapse in March, and even look to bring that date forward.

Much of his confidence stems from the nature of Omicron, which drove infections to record levels in December without increasing hospitalisations and deaths to the same extent.

Graham Medley, chair of the government’s COVID modelling group, told Reuters that when Plan B was introduced, the severity of Omicron and the impact of boosters had been unclear.

In the event, even at the peak, with social restrictions stopping short of a full lockdown, daily deaths stayed below 300 on a 7-day average, compared to more than 1,000 a day in the third national lockdown a year earlier.

Medley said growing immunity – with 83% of over-11s having had two doses of vaccine, and 63% a booster – meant each future wave should be less challenging, though there might be hiccups:

There is also a potential new resource, in the shape of antiviral drugs – aimed at preventing high-risk individuals who catch the virus becoming seriously ill, but not yet rolled out widely.

“Things have changed so much over the last six or seven months,” said Harkishan Mistry, 58, who was included in the “Panoramic” trial of Merck’s molnupiravir after catching the virus.

“We’ve got a clear path going forward. I’m optimistic now,” Mistry said on a video call from Bradford, where he was self-isolating.

His view was echoed by health minister Sajid Javid, who said: “Our vaccines, testing and antivirals ensure we have some of the strongest defences in Europe and are allowing us to cautiously return to Plan A, restoring more freedoms to this country.”

But evolutionary virologist Aris Katzourakis of Oxford University warned that diseases such as malaria and polio may be endemic, but are not harmless. “A disease can be endemic and both widespread and deadly,” he wrote in the science journal Nature.

“It frustrates me when policymakers invoke the word ‘endemic’ as an excuse to do little or nothing.”

A relentless focus on managing COVID, rather than preventing infections, also has unwanted side-effects.

Because National Health Service resources have been diverted towards vaccination boosters, thousands of other appointments have been postponed, adding to a vast backlog of elective care in the state-run system. At the same time, high infection rates among staff and patients continue to weigh heavily on hospitals.

“We all desperately want the pandemic to end,” he added. “Minimising disruption is part of that solution. I definitely feel like we’re on the journey towards living safely with COVID – but I don’t think we’re there yet.”

Nick Thomas, a family doctor in Witney, central England, supporting the Panoramic trial, said local practices were also feeling the strain, despite the success of vaccines and the prospect of effective antivirals.

“We have to manage all of those (other conditions) as well as an Omicron wave right now. And so that balance is really important – and the more tools we have, the better.”

Denial of responsibility! NewsConcerns is an automatic aggregator of the all world’s media. In each content, the hyperlink to the primary source is specified. All trademarks belong to their rightful owners, all materials to their authors. If you are the owner of the content and do not want us to publish your materials, please contact us by email – admin@newsconcerns.com. The content will be deleted within 24 hours.
COVIDCovid RestrictionCovid Restrictions easedEnglandOmicronWork From Home
0
Share