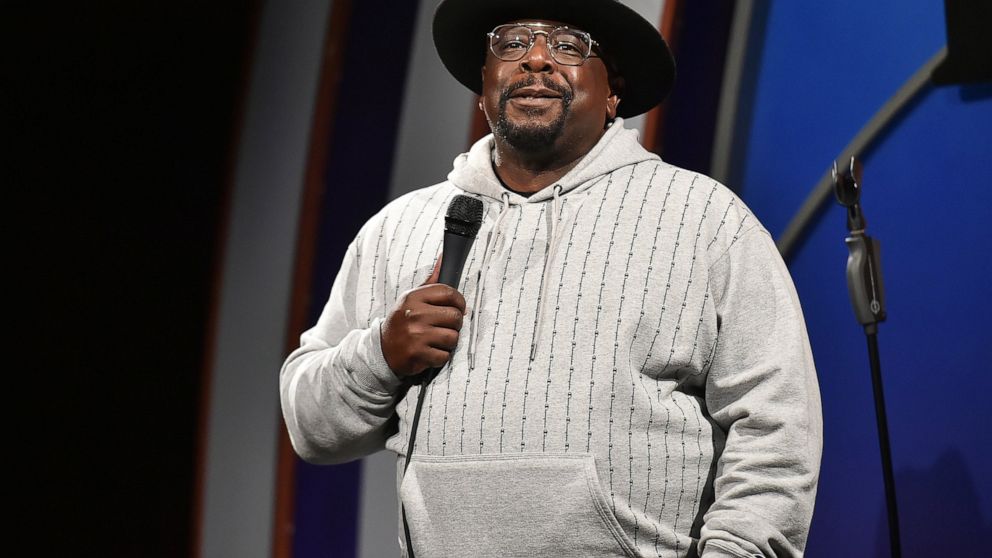 LOS ANGELES — As busy as Cedric the Entertainer is with his sitcom “The Neighborhood” and other projects, he quickly said yes when asked to host his first major awards show.

Then he sought advice on how to handle Sunday’s Emmy ceremony, airing on CBS (8 p.m. EDT).

“Steve Harvey, my good friend who’s hosted a lot of these ‘big nights,’ he had some great tidbits for me,” said the actor-comedian. Others on his call list for trade secrets: Billy Crystal, Anthony Anderson and Chris Rock, all veterans at emceeing Hollywood bashes.

“And if you have a line on Tina Fey, I don’t have her number, but I would love to talk to her,” Cedric said.

He was already aware of one modern pitfall of hosting: Offensive old jokes, like the ones on Twitter that cost Kevin Hart the Oscar emcee gig in 2018.

“Just try not to get canceled beforehand, that’s the biggest thing,” Cedric said, tongue firmly in cheek. It’s the kind of puckish observation that a man with a three-decade-plus career and at the top of his game is comfortable making.

He stars in and produces “The Neighborhood,” the CBS sitcom returning Monday for its fourth season. He’s a producer for the male-bonding TV dramedy “Johnson” and has voiced roles for animated projects including the “Madagascar” and “Ice Age” films and “The Proud Family” series.

His on-screen film credits range from the “Barbershop” franchise to dramas including “Cadillac Records” and “Son of the South” and the Spike Lee documentary “The Original Kings of Comedy.” Cedric appeared on Broadway in a 2008 revival of David Mamet’s “American Buffalo.”

He’s got a production company that’s developing comedies, dramas and a superhero story, with a long-envisioned project nestled in his back pocket: A biopic of early 20th century Black nationalist leader Marcus Garvey. Cedric has his eye on playing him.

Cedric is also a doting granddad to a brand-new kindergartner he’s dubbed #GrandCookie.

“The Neighborhood” is his immediate career focus. He plays a family man in a largely Black neighborhood near Los Angeles who’s struggling to adjust to the chipper white Midwesterner who’s moved next door.

The show’s intent is to address “the merging of cultures…. and what happens when people do figure out how to live together, how to be in harmony, without necessarily changing the identity of the other person,” he said. “That’s what we try to do with the show, and have a good time. Not preach, but teach.”

Born Cedric Antonio Kyles, the Jefferson City, Missouri, native takes a grounded view of his success. Or as he put it: “I’m very blue-collar about it.”

He was a claims adjustor for State Farm insurance in St. Louis and playing comedy clubs at night when he realized he could win over audiences. That’s when he decided to “go for it” as a performer.

“I feel really blessed to have such a long career and one that has mainly just been kind of gradual and steady,” Cedric said. “I laugh a lot on my job. I make people laugh. It’s a good time.”

As expert as he is, awards show audiences can be tough. Those waiting to hear if they’ve won or lost are tense, and viewers at home may shrug over unfamiliar nominees plucked from among an ever-expanding world of streaming and cable shows.

Sunday’s ceremony also faces the challenge of ongoing COVID-19 precautions, which have forced it from a theater into a glammed-up tent and limited the number of stars in attendance. That’s a step up from last year’s event, which was nearly all virtual and audience-less.

Cedric said his goal is a show that avoids stuffiness and brings the TV audience “behind the velvet rope.”

The ceremony’s executive producers, writer-director Reginald Hudlin and Ian Stewart, said they’re confident the event is in good hands. Hudlin and Cedric are friends, and Stewart was convinced in their first Zoom meeting.

His smiling face ”beamed out, and he said, ‘Let’s party. Let’s celebrate,′” Stewart recalled. “And it was just this breath of fresh air coming through the doom and gloom period that we’ve all been through.”

Cedric’s versatility will be showcased, Hudlin said, adding, “He’s literally a king of comedy, and you’ll see why he wears the crown.”

One element that’s out of Cedric’s control involves his pal Anderson, the “black-ish” star who’s had six previous best comedy actor bids without a win and is competing again.

“’Now that you’re the host, take care of that for me,’” Anderson told him, jokingly refusing to accept rejection.

“So he’s going to win something,” Cedric said with a smile. “I don’t know what it’s going to be, but something.”

Denial of responsibility! NewsConcerns is an automatic aggregator of the all world’s media. In each content, the hyperlink to the primary source is specified. All trademarks belong to their rightful owners, all materials to their authors. If you are the owner of the content and do not want us to publish your materials, please contact us by email – admin@newsconcerns.com. The content will be deleted within 24 hours.
anthony andersonArts and entertainmentAward showsBilly CrystCedric the EntertainerCelebrityChris RockEmmy Awards
0
Share