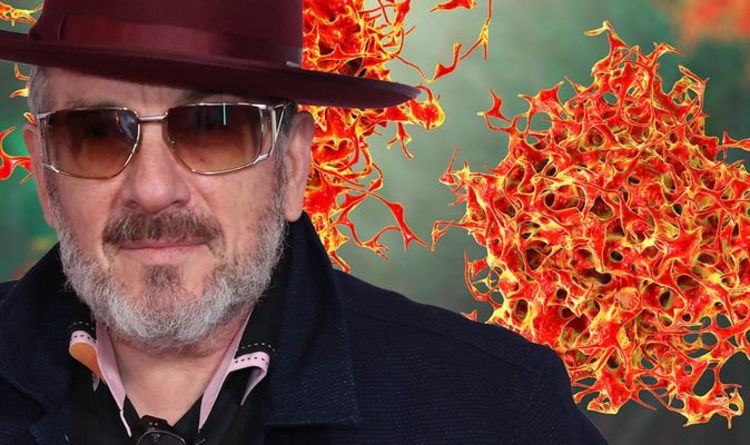 Emerging onto the British punk and new wave movement scene in the 1970s, Costello made head-waves with his first three albums, all of which appeared on Rolling Stone’s list of the 500 Greatest Albums of All Time. Then after forming the Attractions, the group toured and recorded together for the best part of a decade. Yet in 2018, Costello was struck with devastating news; he had prostate cancer.

Although keeping details about his cancer diagnosis quiet on the whole, the star did say that doctors had found a “small but very aggressive cancerous malignancy”, which had forced him to cancel a number of tour dates.

In May of the same year, Costello decided to have surgery to treat the disease. In light of his diagnosis and subsequent treatment, Costello used his platform to encourage others, especially men to check their health regularly.

He added: “Gentleman, do talk to your friends – you’ll find you are not alone – seek your doctor’s advice if you are in doubt or when it is timely and act as swiftly as you may in these matters. It may save your life. Believe me, it is better than playing roulette.”

Prostate cancer affects the prostate, a small walnut-sized gland that grows bigger as you get older. The gland sits underneath the bladder and surrounds the urethra – the tube that carries urine out of the body.

Prostate Cancer UK explains that the main job of the prostate is to help make semen, but some common problems that arise with the prostate include enlargement, prostatitis and prostate cancer.

Prostate cancer develops when cells in the prostate start to grow in an uncontrolled way. Typically this is a slow-growing cancer, and individuals may not notice any signs for years. However, there are cases in which the cancer grows quickly, making it more likely to spread around the body.

If the cancer spreads to other parts of the body or breaks outside of the prostate [locally advanced prostate cancer], other symptoms that may occur include:

Speaking further about his ordeal with prostate cancer, Costello denied rumours that the condition was life-threatening, instead saying that he was “extremely lucky” doctors found the tumour.

Making light of the situation Costello said: “I was receiving letters for three weeks. No, I am not dying! It’s not to make a joke of it, because you don’t have to walk very far to find somebody you love who’s genuinely having a fight [with cancer].”

As Costello hinted towards, early detection of prostate cancer is always more beneficial as treatment and removal of any tumours can be carried out before it potentially spreads.

Therefore, if you or someone you know thinks they might be at risk of prostate cancer, it is important that you visit your GP or speak to a specialist nurse.

When seeking medical advice, there are multiple different tests that can determine whether you have prostate cancer including blood tests, MRI scans, biopsies and a physical examination.

A specific test, known as a prostate-specific antigen (PSA) test, helps to detect prostate cancer in its early stages.

However, due to some controversy with the reliability of PSA tests, they are not routinely used to screen for prostate cancer.

Raised PSA levels can be raised by other non-cancerous conditions, but the test cannot distinguish between a life-threatening prostate cancer or another condition.

If further tests show that you do have prostate cancer, treatment may not need to start straight away.

If the cancer is in an early enough stage, doctors may suggest either “watchful waiting” or “active surveillance”. Both treatment options depend on your age and overall health, but will carefully monitor your condition.

If, like Costello, further treatment is needed, the main options include either surgically removing the prostate or radiotherapy. If the cancer has spread to other parts of the body and cannot be cured, treatment is focused on prolonging life and relieving symptoms.

The NHS warns that all treatment options carry the risk of significant side effects, including erectile dysfunction and urinary symptoms, such as needing to use the toilet more urgently or more often. For this reason, you may choose to delay treatment until there’s a risk the cancer might spread.

Does The Mercedes-AMG A35 Have A Chance Against The BMW M340i?

How close is Ja Morant now to Derrick Rose during his MVP season?